The Russian Revolutions of 1917

In 2017, the world will mark the hundredth anniversary of the Russian Revolutions, a dramatic series of political occurrences with consequences that are still being felt today. Tobie Mathew discusses his own collection of pictures related to these events, which are listed exclusively with Bridgeman Images.

There is something extraordinary about seeing historical images of dramatic upheaval; the frisson of excitement that filters down the ages, the chaos and confusion of contemporary reality brought back to life on the page or screen. Over the last fifteen years or so I have spent much of my spare time and resources building up a collection of original pictures, ephemera, and documents that I hope go some way towards recording the complications of social and political developments in Imperial and early Soviet Russia, as well revealing a more human side to the Liberation Movement. 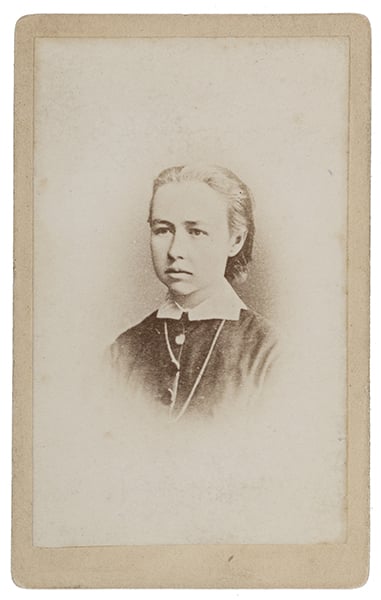 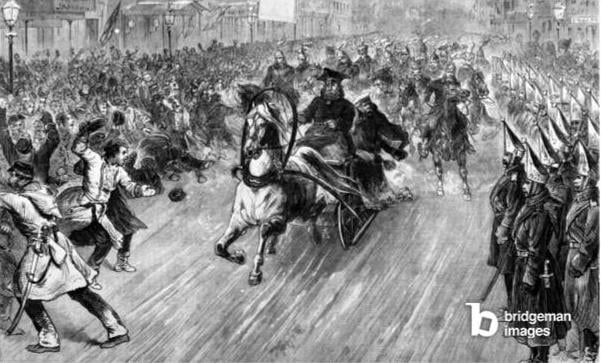 In the early part of my career, I spent a number of years in Moscow working as a journalist, but I have most recently been occupied writing a book on early Russian revolutionary propaganda specifically anti-government postcards. Through the course of my research in the police archives I came across several very early examples of revolutionary pictorial propaganda, some dating back to the 1870s, when small cells of subversives started manufacturing photographic cartes de visites, initially in Western Europe, but later also illegally inside the Russian Empire itself. 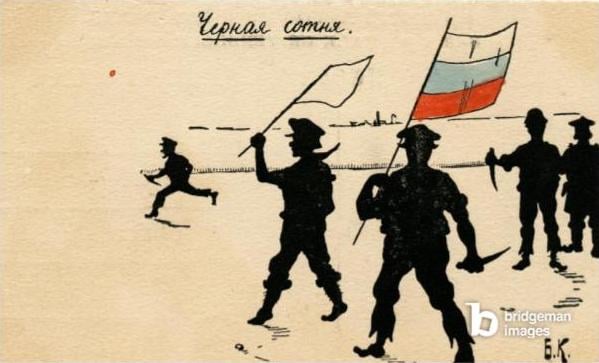 Around the turn of the century, postcards replaced carte de visites as the revolutionaries main form of visual propaganda. Satirical caricatures, real photographs and leftist portrait postcards were extensively manufactured during the 1905 Revolution and beyond, when they were used both to spread an anti-government message as well as to raise funds for opposition groups. Such were the profits to be made that commercial firms also became heavily involved during a short-lived period that was described by one journalist as a publishing bacchanalia 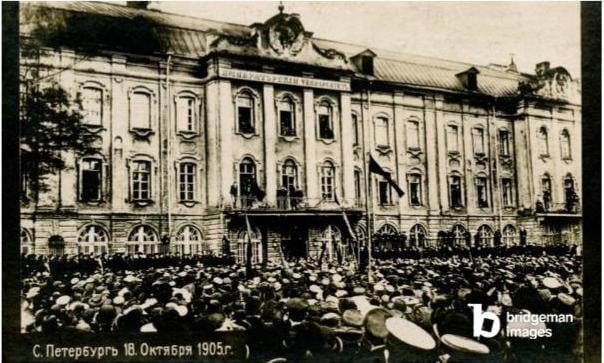 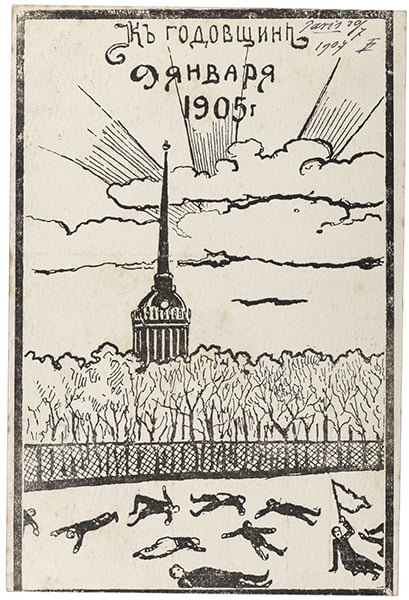 By 1910 the Imperial jackboot had to all intents and purposes extinguished leftist postcard production in Russia, but the medium came back with gusto following February Revolution and the overthrow of Tsar Nicholas II. Once again postcards proved a valuable propaganda tool, used to desacralise the monarchy in the eyes of the people, as well as to establish a historical narrative about recent events. Postcards also served as cheap and simple souvenirs with which to celebrate and remember what were for all concerned, life-changing events. 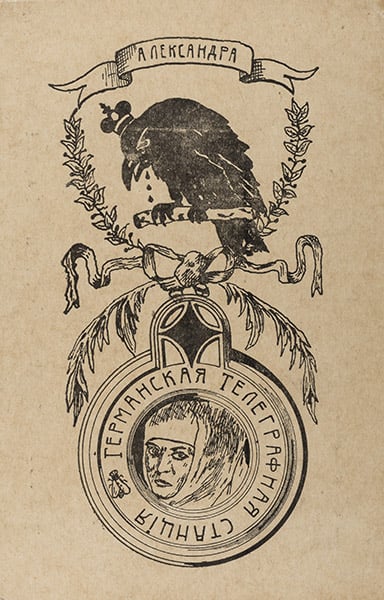 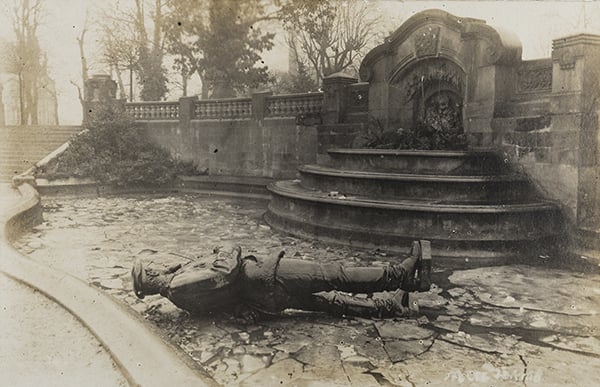 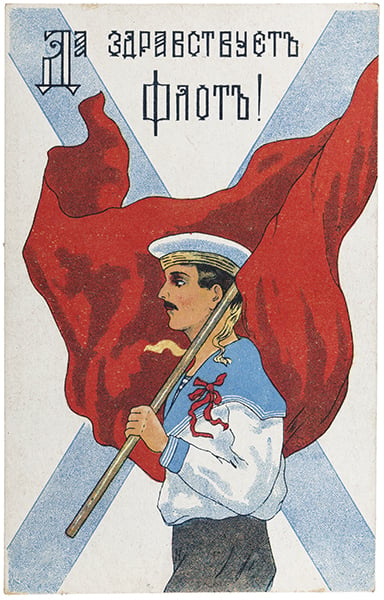 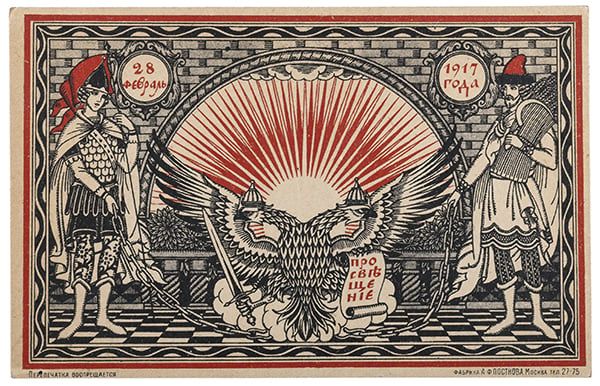 For the first time, large-scale posters could also be put to the service of the Revolution. The image below was produced by the Socialist-Revolutionary Party to drum up support ahead of elections to the Constituent Assembly. 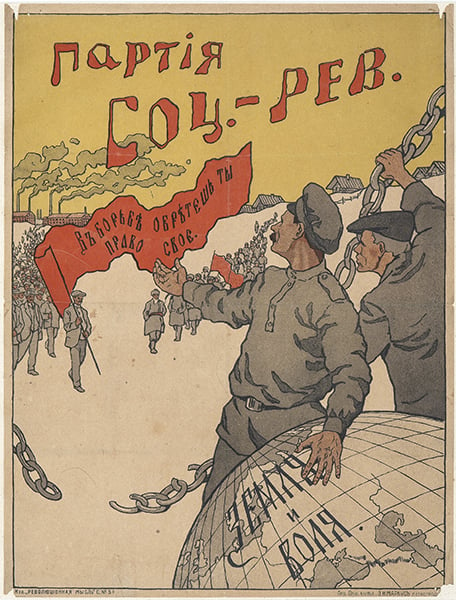 After months of increasing dissatisfaction, the Bolsheviks made their final move. Early in the morning on November 7, the Winter Palace was stormed. Even before the group had gained control over the city, Lenin wrote a short announcement declaring that the Provisional Government had been overthrown. This note, which is essentially the founding document of the Soviet state, was printed up and quickly distributed across the city. Observe the different typefaces: not enough letters of one font could be found at such short notice.

The very first publicly reproduced photographs of Russia under the Bolshevik regime were again issued in postcard form. This rare image, from a set depicting the burial of victims of the October Revolution (here referred to only as the upheaval of 28-30 November) is believed to be the earliest known picture of Soviet Russia. 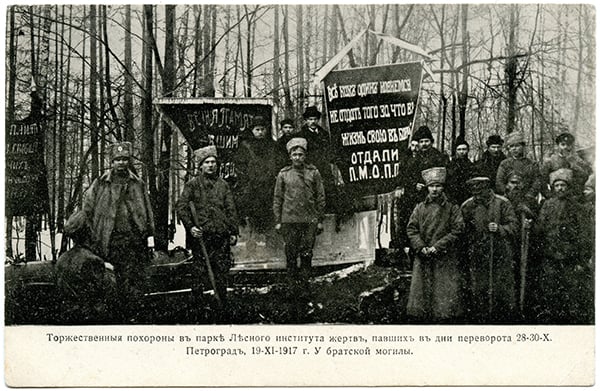 The takeover in Moscow was far bloodier than in Saint Petersburg, with extensive damage done to both Saint Basils Cathedral and the Kremlin. These two postcards, taken by the photographer A.F.Dorn, show the former capital in the immediate days after Lenin and his cohorts came to power. 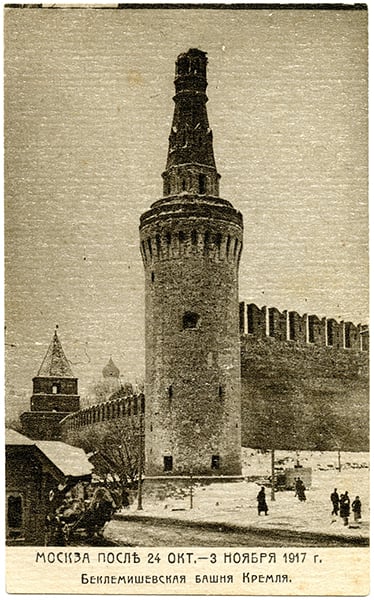 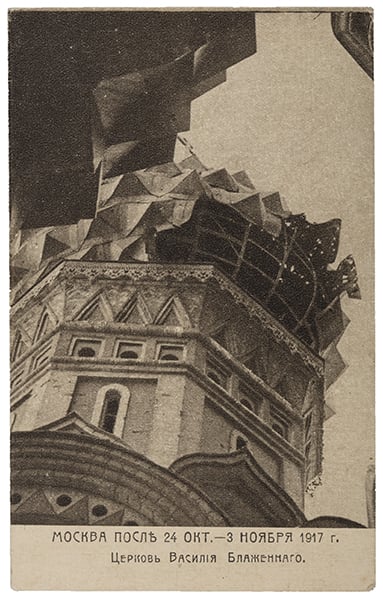 There were no propaganda images of Lenin published before 1917, and the earliest mass-distributed pictures of the Soviet leader were all printed as postcards. Publishers used whatever images they could get their hands on, meaning that many reproduce portraits not often seen elsewhere. Some even use the photograph from his old police file. In 1918, the photographer Moisei Nappelbaum took what is perhaps the best-known image of Lenin (see image below right). Thereafter this formal portrait became the standard depiction of the great demagogue used in Soviet propaganda. 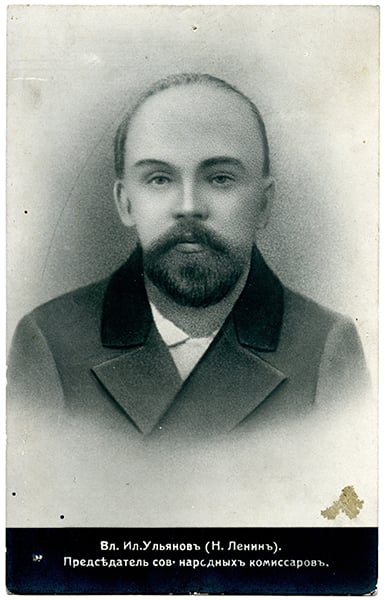 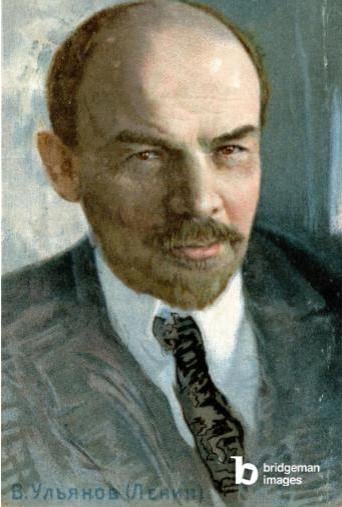 Early group portraits of the Bolshevik leaders are uncommon, not least because so many of the individuals they depict were repressed under Stalin. Trotsky was a particular focus for the black lines of the censors pen, but anything that smacked of unorthodoxy was dangerous to own. The postcard below right, which not only refers to the Bolshevik takeover as the Second Russian Revolution but also gets the date wrong, fits very awkwardly with later Soviet narratives. 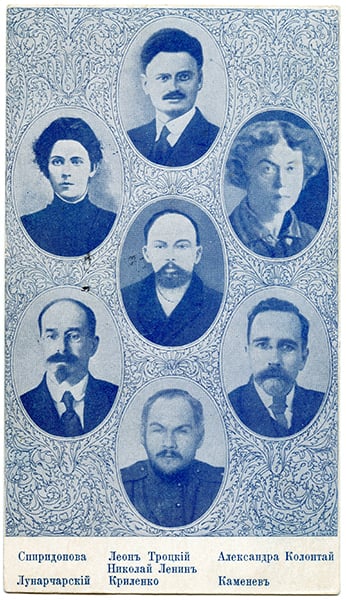 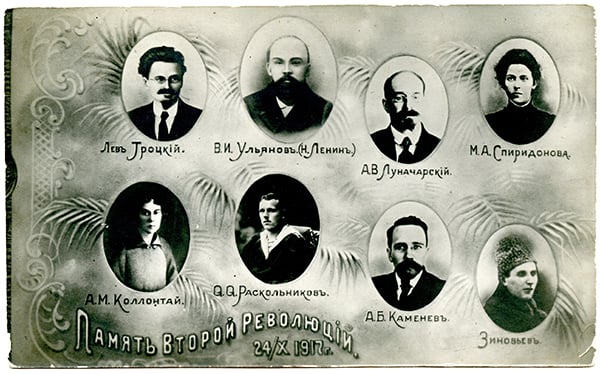 In fulfilment of their revolutionary slogan Peace, Bread, Land, the Bolsheviks sued for peace, and under the terms of the heavily punitive Treaty of Brest-Litovsk, Russia temporarily ceded huge swathes of territory to Germany. 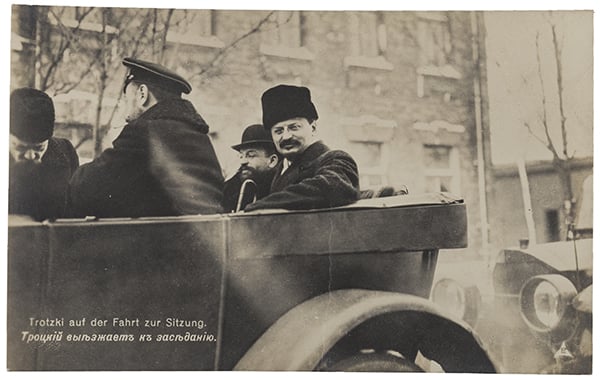 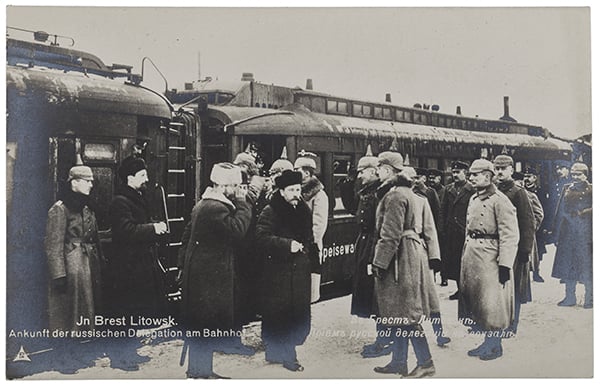 Withdrawal from the First World War left the Bolsheviks free to concentrate on their internal enemies, and yet again postcards proved an invaluable tool in advancing partisan tales of a workers paradise under threat from greedy capitalists and their hired mercenaries.

Postcards were also put to use by the opposition. This exceptionally rare image, which shows Lenin as a sozzled drunk unfit to preside over the country, was produced by an anti-Bolshevik group in Russia around 1918. 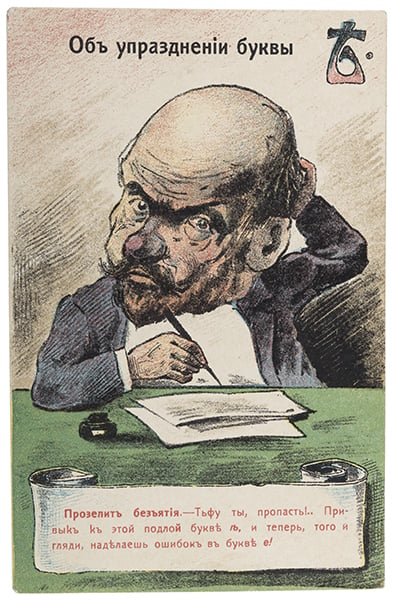 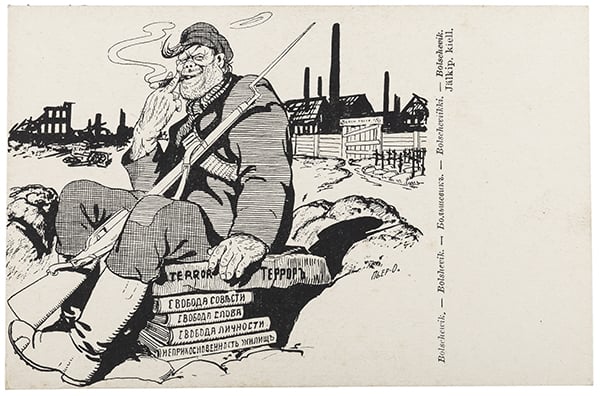 The Civil War caused immense destruction to families and properties across the former Empire. No one was immune, from the lowliest peasant to the highest in the land. In July 1918, as anti-Bolshevik forces neared Ekaterinburg, the order was given to kill the Imperial Family. This postcard and photograph both show the Ipatiev House where the murders took place. 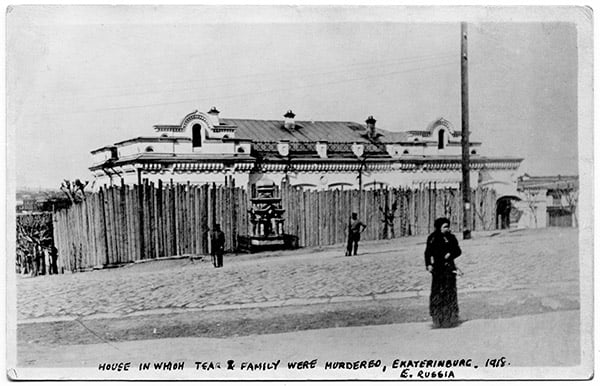 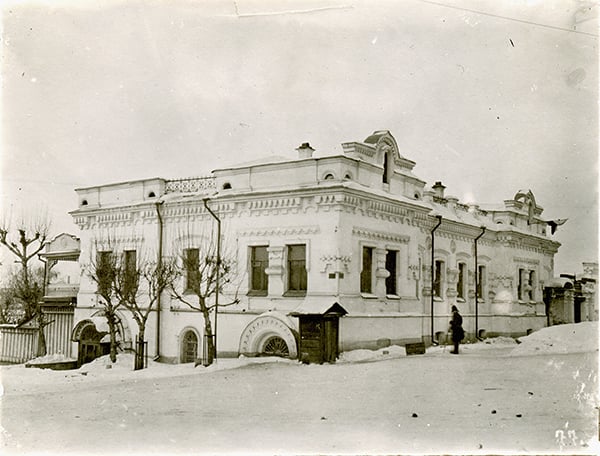 Many in the extended Romanov family were killed, but a few did escape. The document below was used as a checklist aboard HMS Lord Nelson, a British battleship that was used to evacuate surviving members of the Romanov family and their entourage in 1919. 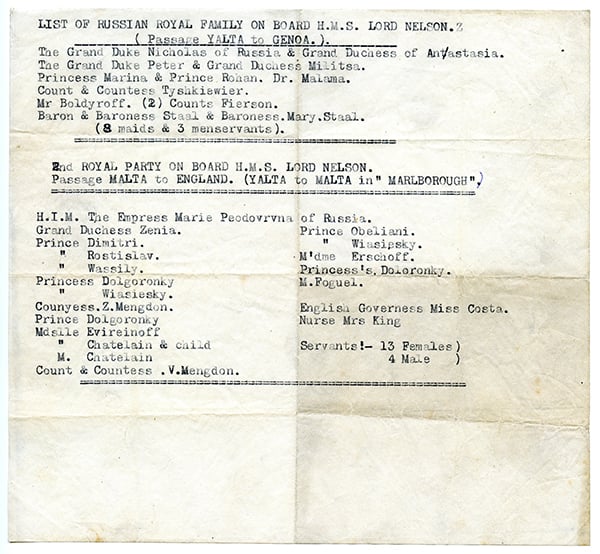 The anniversary next year will no doubt again be used for political ends, but it provides an opportunity both for remembrance and reassessment. Nothing can bring one closer to the disputed reality of this turbulent era than looking at the objects that were produced at the time, which capture both the great hope that so many had for a better future and their despair at the havoc that ensued.

See all images from Tobie Mathew’s collection: more content is always being added

Romanovs, Rebels & Revolutions: A history of Russia on Film

Art for the People: Soviet Art under Investigation

Art for the people: Soviet art under investigation – bridgeman blog

After the Communist revolution in 1917, the new government took control of the art establishment...
Read More

Step back in time through photography to Russia’s heart of culture on the brink of revolution. ...
Read More