Through history, the sporting world has inspired artists in a range of media all around the world, from Italian André Durand's modernist-inspired oil paintings to the contemporary work of English Peter Spens. Soviet artists such as Evgenia Endrikson lend distinctive visual flair to classic Olympic imagery and contemporary photographer Jon Nicholson makes a fascinating contrast with the work of Leni Reifenstahl, whose work with the Olympics comprised of photography and video making.

André Durand is an artist based in Italy whose paintings have been featured in solo exhibitions nationally and in England. In addition, his art is part of the Scottish National Gallery and the National Portrait Gallery in London's permanent collections. Durand's figurative works oscillate between mythological and Christian themes. However, some of his portraits depict a marriage of the two religions. He primarily creates using oils on linen.

For Durand the double challenge for him as an artist is first to reunite in his pictures religion and art, divorced by Modernism and its repudiation of content, and in the same brush stroke observe the criteria of the Neomodernist Manifesto, in particular. “A Neomodernist approach to religious subject matter is objective and philosophical, not an affirmation of faith.” The Neomodernist Manifesto was written in 2000 to set out the artistic ideas Durand had honed instinctively over the three preceding decades and consolidated in Florence, Sienna and Rome in the early 90s, painting in intimate proximity to masterpieces by the artists that inspire him.

Evgenia Mikhailovna Endrikson was born in Zurich, Switzerland, where her parents lived after leaving Russia, having participated on the losing side in the 1905 revolution. The family returned to the Soviet Union after the 1917 revolution, and she studied at the VKHUTEMAS art school under Kupriyanov and Favorskii from 1924-1930. After graduation, she worked as a graphics illustrator for the journals “Pioneer” and Druzhnye Rebyata”, and, in the 1930s designed posters for “Izogiz”.

In the 1940s Evgenia Mikhailovna worked for the famous childrens’ jounals “Murzilka” and “Pioneer”. From the late 1940s and through the 1950s she worked mainly as a book illustrator of childrens’ books.
During the late 1950s and 1960s she worked on a series of gouaches and lithographs based on classical Russian folk tales and fairytales. In the 1970s, she prepared a large series of gouaches and lithographs, inspired by the famous Mayakovsky poem “Vladimir Ilych Lenin”. Her work is immediately striking and dinstinctive.

Peter Spens studied Fine Art at Bristol Art School, graduating in 1983. Since then he has painted consistently, working in front of varied motifs. He has concentrated on painting and drawing London since 1996. A retrospective of his major London works was held in the main Guildhall Art Gallery by the City of London in 2006. This bought together key pieces from his previous four Cork Street exhibitions. Spens works in series from buildings and has painted from Tower 42 in the City, Financial Times, Riverside House and Queen Street Place, which cluster around Southwark Bridge, Tate Modern, The Millbank Tower, The Shell Centre, 80 Strand (formerly known as Shellmex) and Five Strand looking onto Trafalgar Square.

Mikhail Grigorevich Rojter was born in Vinnitse in Ukraine (1916) and received his first education in fine art at the RabFak section of the Kiev Art Institute which provided education for the children of workers. From his early student years, his preferred media was graphics, Indian ink and watercolour, and prints, mainly etching and engraving, lithography and monotype, and occasionally linocut. From the late 1950s, he developed a passion for depicting sports, both in strong expressive prints, and in wonderful soft impressionistic watercolours.

He was considered one of the leading artists working in the sports genre. Another favourite theme of his was the Soviet Youth: Students, Komsomols and Pioneers, Siberian youth, young workers and sports-youth populate his genre works of the 1950s and 1960s. From the late 1970s onwards, he concentrated on watercolours, showing the changing faces of the cities of Moscow and St. Petersburg and other provincial cities during a time of major architectural changes. He painted large impressionistic cityscapes of the disappearing Moscow, and the new city emerging, as well as Dostoevsky’s St. Petersburg which held a special place in his heart. Rotjer died in 1993. 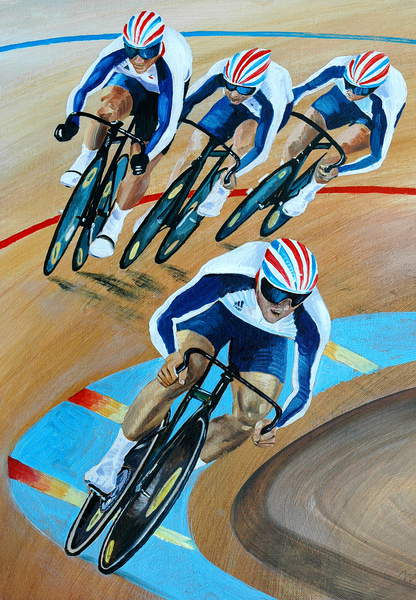 Born in 1942, Alex Williams trained at St Martin’s School of Art and The University of Wales. He became an art teacher, later Head of Art, at schools in Hertfordshire before moving to Hay-on-Wye to set up his design and print studio. Moving to the Welsh Border country in the late 1970’s was catalytic in his development as a painter of farm landscapes, animals, buildings and agriculture.

His work was widely exhibited in the UK and Alex then moved to Los Angeles for three years, exhibiting there and undertaking commissions for Tom Jones and Jackson Browne as well as for magazines and companies. His images have been widely used in Tableware and Fine Bone China, Limited Edition Prints and Greetings Cards. His versatility also extends to numerous TV appearances as artist and art teacher, in Australia as well as in the UK.

He has exhibited widely in both individual and group shows and his work is in many public and private collections. The National Museum of Wales has purchased a number of his landscapes of the Welsh Borders and he has collaborated very successfully with the National Trust on a range of products. He moved to the Isle of Wight in 2012 and is currently working as artist in residence at The Griffis Art Center, New London, Connecticut. 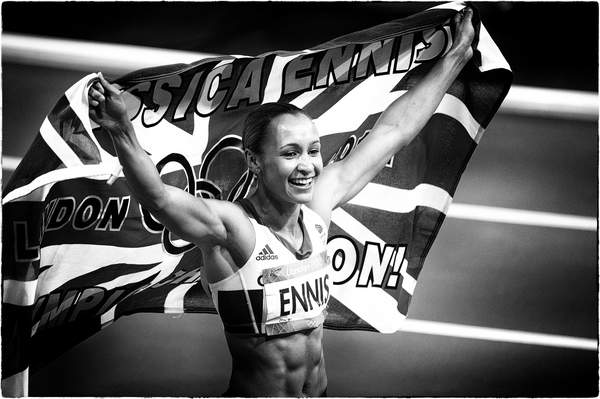 With a career spanning 35 years and many continents, Jon Nicholson’s relentless passion for capturing the real story is the driving force behind his photography. From behind the F1 barriers to documenting global issues, Jon’s view from behind the lens manages to capture a depth of human emotion or level of detail that many of us would fail to see. He has an incredible ability to find beauty in even the harshest of circumstances, creating pictures that communicate respect, empathy and a deep connection to his subjects. There is no pretence, no judgement and no desire to shock, only to provoke thought, share knowledge and evoke passion.

Jon’s relentless pursuit of the picture he wants to take and the story he wants to tell, knows no bounds whatever the exclusivity of access, level of confidentiality, remoteness of geography or degree of danger. Jon was “the man for behind the scenes” in sport which granted him unprecedented access to top sports personalities and teams around the world in Motorsport, Rugby Union, Football and Athletics. His focus was never just on the personalities themselves, but the surrounding stories of the fans, the events and the unseen side to the sport. Jon has been official photographer for the Olympic Games twice: in Barcelona in 1992; and in London in 2012. He spent a year documenting the life of Olympic athlete Linford Christie, and later a behind the scenes look at all aspects of Chelsea FC and FC Barcelona.

This month, our Artist Manager Aretha Campbell spoke to Jon Nicholson for an interview. Read it here. 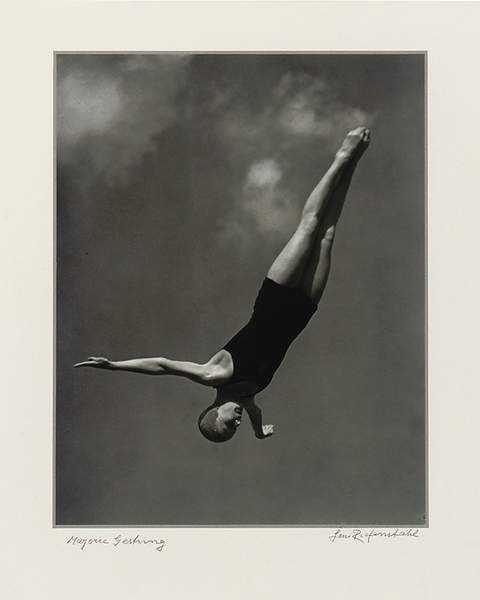 Leni Reifenstahl was born in Berlin in 1902. She studied painting and started her artistic career as a dancer. After a promising start where Max Reinhardt engaged her for the Deutsches Theater, an injury of the knee put an end to her sensational but short lived dancing career. After that, she became famous as an actress, a film director, a film producer and a film reporter. However, due to the world war her work became condemned as National Socialist propaganda, her reputation damaged as a result. She turned her talents to photography, with work published in the magazines Stern, The Sunday Times, Paris Match, Newsweek and more. Illustrated books of her work won awards.

At the age of 71, Leni Riefenstahl fulfilled a dream to herself which she had held for many years. She attended a diving course to be able to work as an underwater photographer. Soon she became a master in this profession too. With her two illustrated books, 'The Coral Gardens' and 'The Wonders Under Water' she had caused a worldwide sensation, receiving honours and awards for them. Working well into her 90's she was primarily concerned with the finishing of her first underwater film - she visited the most beautiful diving areas as part of its production. Even at the age of 94, she dived in Cocos Island (Costa Rica) and took pictures of sharks.

At 97, she made the decision to travel back to Sudan - at the time isolated because of the civil wars - in order to learn more about the fate of her beloved Nuba which had inspired her early work. While her initial visits weren't entirely successful, she always intended to return. Leni Riefenstahl died on Monday 8 September 2003, in Poecking, Germany, just a few weeks after her 101st birthday.

Fashion through the ages – bridgeman blog

The Fashion Museum Bath is one of the world’s great museum collections of historical and...
Read More