The Depiction of Orange

Orange is the colour between yellow and red on the spectrum of visible light. To painters, and in traditional colour theory, it is a secondary colour of pigments, created by mixing yellow and red. It is named after the fruit of the same name, and like many other staples of the colour spectrum has a fascinating past in art history across genres, countries and cultures.

On a scientific level, the colour orange can be seen in many fruits and vegetables, such as sweet potatoes, pumpkins and carrots, where the colour comes from carotenes - a type of photosynthetic pigment which converts light energy absorbed from the sun into chemical energy to aid the plants' growth. In a similar fashion the hues of autumn leaves are from the same pigment which is left over after the chlorophyll is removed.

Humans associate the colour orange with extroversion, warmth, fire, amusement, energy and aroma or taste. As mentioned previously it is also associated strongly with autumn when combined with yellow and brown, as well as having long been the national colour of the Netherlands and the House of Orange. It is also synonymous with the religions of Buddhism and Hinduism in Asia, where it is most prominently used as the colour of robes and decorations.

Below are examples of seventeenth century Dutch/ Flemish still life paintings, picked out in lavish detail. Depictions of the oranges, lemons and surrounding fruits/green leaves are beautifully represented, with the fruits appearing as the focal point; ripe and ready to eat.

Even if analysing a high resolution version of this image, the individual brush strokes are very hard to spot. In the example below, the items have been painted as they would appear in person, with delicate lighting, details and textures picked out with the utmost care. Pomegranates, lemons, and oranges sit in a delicately painted Chinese porcelain blue bowl. 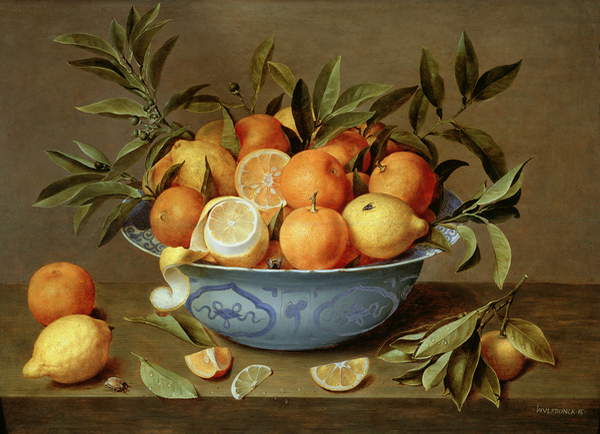 This still life is painted in a style more indicative of a baroque approach, with a dark, almost suspenseful atmosphere in this still life permeating through the piece, food, wine and exotic Indian spices fill this display where each individual component is emphasised. 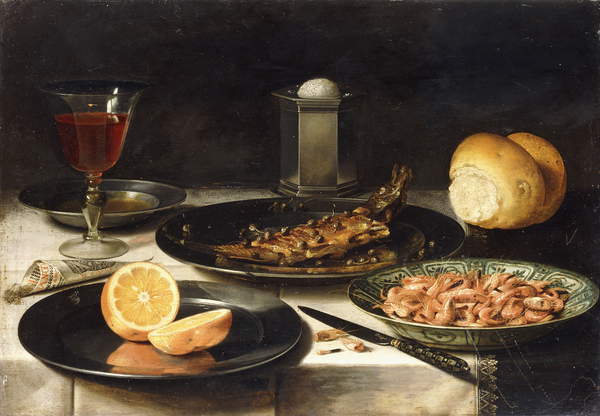 Exquisitely Illusionistic, oil paint has been used to create this convincing representation of citrus fruits, a silver plate and a white, almost marble looking bowl. Mixed tones of orange create an illusion of a ripe luxurious fruit, light sparkles on the orange’s surface highlighting its almost dotted peel. This painting holds an immense verisimilitude, similar to that of Van Eyck who used oil paints to render naturalistic and illusionistic features within his works. 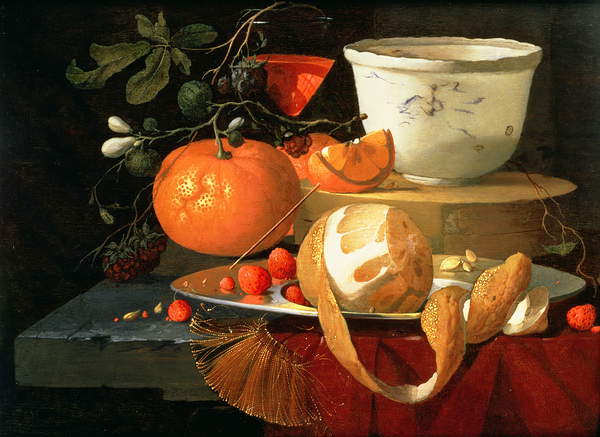 Oranges in the Formation of Patterns

The appearance of a sliced orange is stripped down to its basic shapes and block colours. Segmented and arranged, perfectly round in shape, these patterns create a series of fashionable images. Clear precise form and repetition are used to create a Pop appeal to MacQueen’s work, which is used in the world of products today from shower curtains to prints. 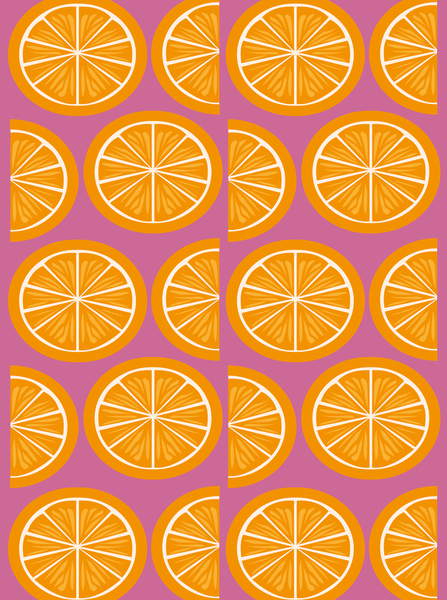 Oranges are depicted in a variety of forms here, from totally peeled to partially peeled or broken into segments. On a white cloth background, the focus here is instead on the range of orange shades and shapes the fruit takes. All the colours are bright and vibrant. 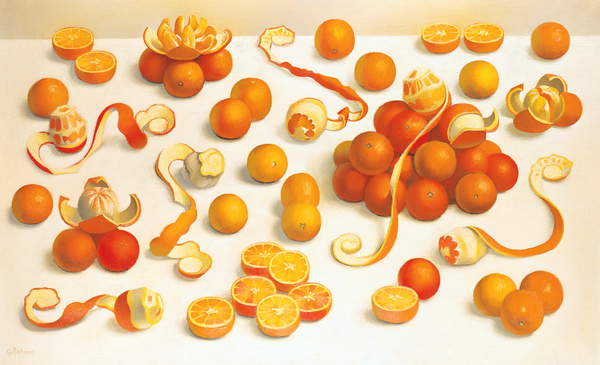 Exposure and filters have been modified for this digital photography artwork, which includes circular shapes of sliced orange and a bitten chunk as well. The filters and edits applied give the orange colours a brown hue, emphasised by a purple tinted shadow. 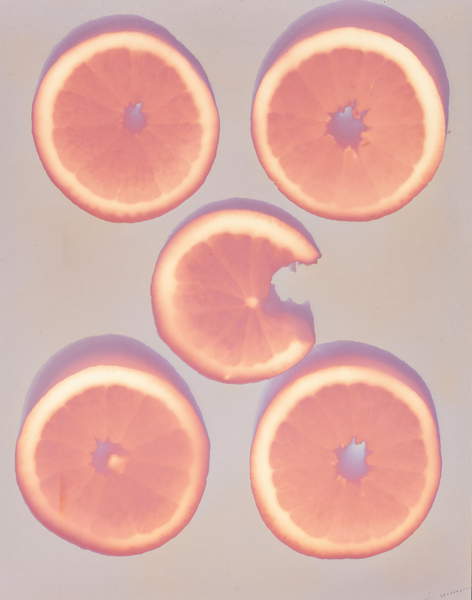 By contrast, a slightly more realistic looking orange is used in this pattern. It isn't sliced but the image is repeated, with leaves still attached to the orange which drape around each one, giving a sense of flow to this pattern - all of which is framed on an attractive navy and green background. 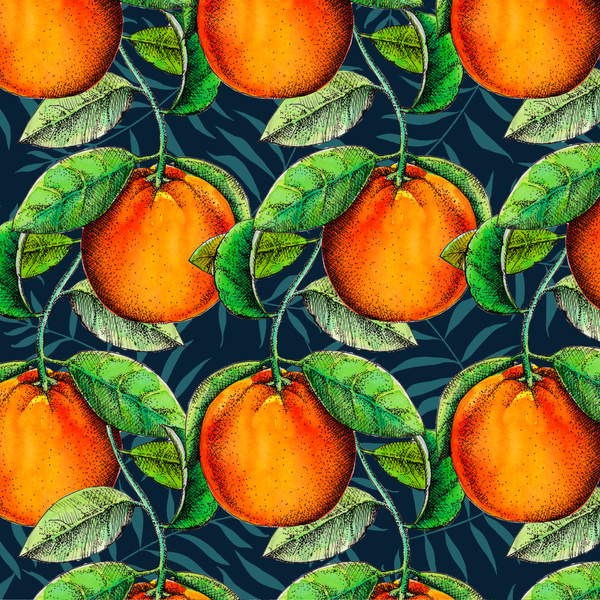 This fun portrait combines a selection of oranges and lemons, which are delicately balanced on a rattan-style tray which is held atop a woman's head. The lady has ginger hair which is complimented by her outfit - a black shawl with orange lining - and a waistcoat picked out in a variety of warm shades with contrasting blue detail. Finally the ensemble is brought together by a pleasing orange background which has also has hints of gold and brown.

Here, green and orange appear together, which are complimentary colours. Once again orange elements of an outfit are combined with a black robe and orange accessories on the head and waist, and the lady depicted holds a single orange in her hand. 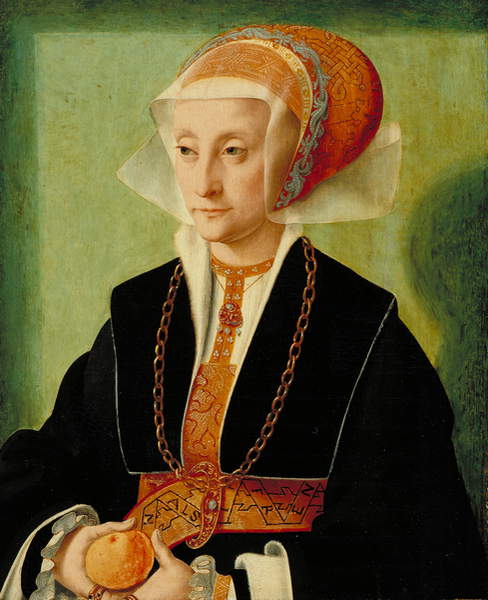 Oranges and lemons add hints of brightness to this otherwise rather muted composition. The colours are nicely set off by contrasting shades of blue and grey. Nonetheless, the emphasis remains primarily on the subject of the piece. 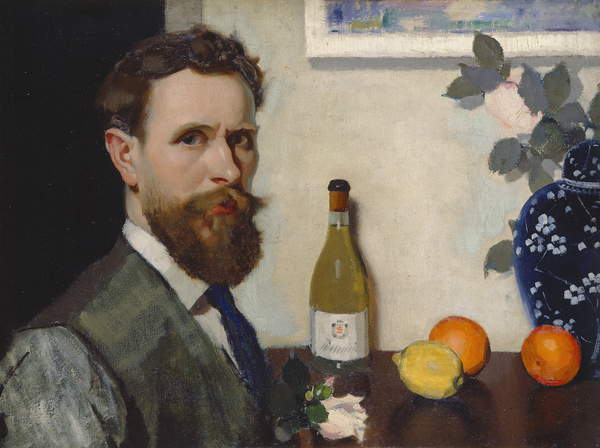 Fields of Orange countryside harmonise with small fruits in the foreground which includes oranges and large apples. Orange tones appear across the canvas, highlighting facial features of both man and woman, with an emphasis on their expressions, the lighting, and the smooth, glossy metallic sphere held in the woman's hand. This item reveals the couple are actually sat in a room, hinting that their background must in fact be a painted wall as opposed to a real field. 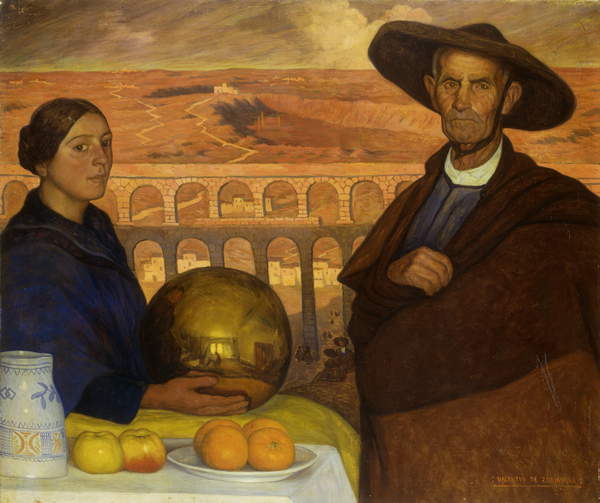 Colour champion Pantone has just announced their Colour of the Year for 2018: 18-3838 Ultra Violet
Read More

Colour Blocking is defined as the selection, combination and application of opposing colours on...
Read More