International Day of Peace: Peace in Art and Photography

Each year the International Day of Peace is observed around the world on the 21st September. The United Nations has declared this as a day dedicated to strengthening the ideals of peace, where through 24 hours, non-violence and cease fire is held. True peace is achieved in a world where everyone is treated equally. By standing for social justice and supporting peace initiatives change is possible, and we're reminded constantly in today's world that so much more can be done to move towards a shared common interest.

In this article we will take a look at a selection of artworks and photographs which depict or are inspired by scenes of peace and tranquillity, from inner harmony to scenes of ceasefire. These images reflect a state of mindfulness, harmony and amity.

Kaaria Mucherera is an African American contemporary artist. This image has been executed in oil and acrylic. The main theme portrayed is the idea of escape. A dove gently rests in the man's open palms whilst he closes his eyes and parts his lips - contemplation and reflection is the theme here. The pale blue background is indicative of a heavenly atmosphere. The dove is a bird of peace - it's a symbolism of Judaism, Christianity, Islam, Paganism and of both pacifist and military groups. 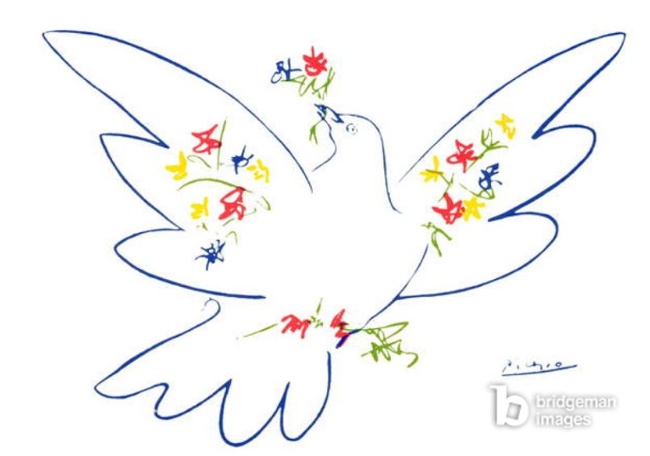 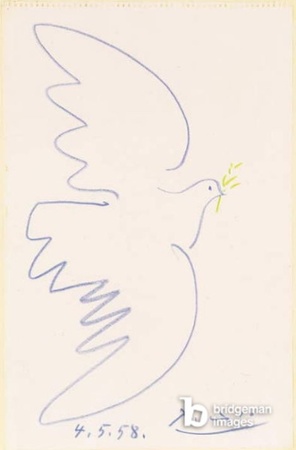 Pablo Ruiz Picasso created artwork of doves as both pastel sketches and as lithographs on paper. Picasso’s love for the white birds didn’t stop there - he named his fourth child ‘Paloma’, the Spanish word for ‘dove’. These light illustrations are delicate and simple. The dove is a beautiful yet unassuming bird. Feelings of hope lie within these images. In 1949 Picasso produced an image titled ‘Dove of Peace’, it displayed a white dove situated on a black background. The image was used to illustrate a peace poster presented at the 1949 Paris Peace Congress - it also became an iconographic image of the period.

The Four Corners of the world, from ‘War and Peace’, Picasso 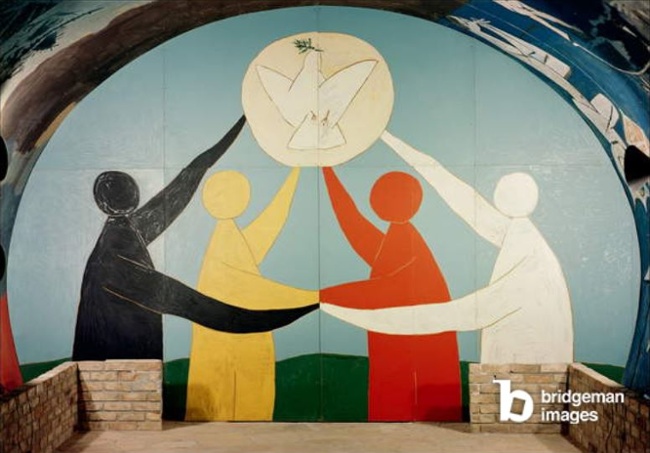 War and Peace was one of Picasso’s largest projects, a themed output of hundreds of paintings and preparatory drawings. A series of murals were created for a chapel in Vallauris, France. In spite of their stripped back, minimal appearance, emblematic works like this have become closely associated with the work of Picasso as well as his historic cubist and blue period pieces.

To secure a world of peace, one must find their calm state; the uplifting qualities of tranquil natural environments have been depicted by artists throughout centuries. It’s thought that a tranquil mind helps one maintain inner poise and clear judgement. The calmness of a tranquil mind is best reflected in the peace and calm of the natural world - far from the hectic and often stressful world of city life. These images presented here demonstrate artistic symbolism of harmony and balance. 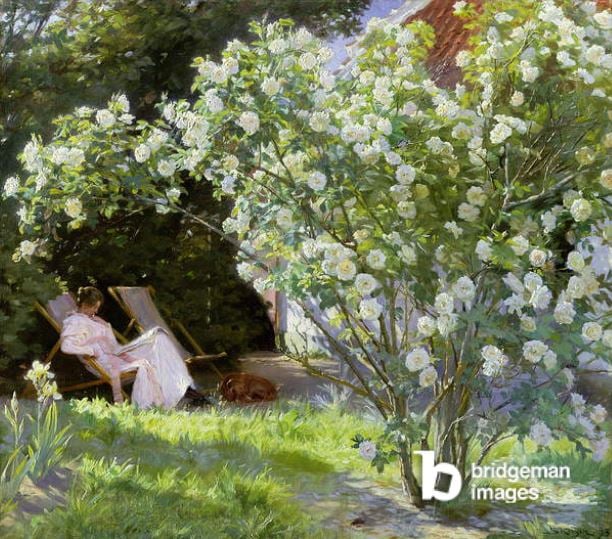 Danish painter Peder Severin Kroyer drew his inspiration from contemporary Impressionists - Alfred Sisley, Edgar Degas, Edouard Manet and Pierre-Auguste Renoir. Kroyer himself is recognised as a remarkable figure of Realism and Impressionism. He began his art education at the young age of nine under private tutelage. He enrolled at Copenhagen’s Technical Institute the following year. Throughout Kroyer’s career he exhibited regularly at Charlottenborg. His painting possesses a loose rhythmic style. Shades of green, white, browns, yellows combine to form Kroyer’s soothing garden paintings. Although quite realistic, Kroyer forms abstract mosaics of texture to convey his mastery of tints, shades and tones. 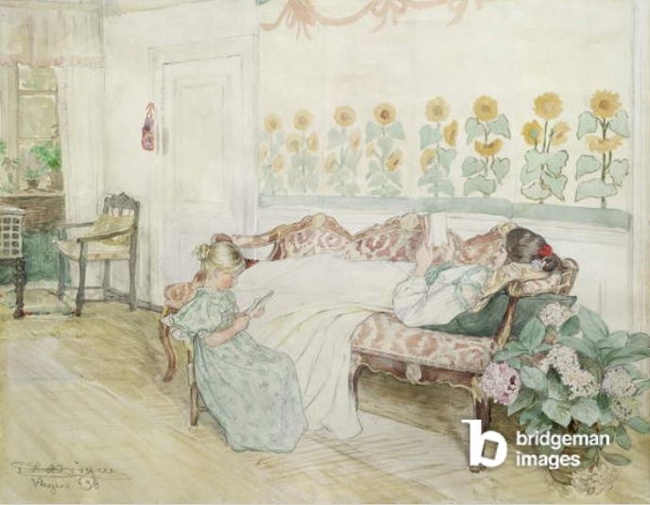 Another remarkable image by Kroyer. Here we are presented with a delicate watercolour sketch of two young girls reading in their living room. A sequence of bright sunflowers decorate the room's wallpaper. The colours in this image are light, beige and tints of yellow wash across the surface, creating a warm, homely feeling. Reading and absorbing one's mind into literature simultaneously inspires in a reader a sense of calm and resilience. Writers are shapers of life, they are able to promote peace in particular societies.

The Water Lilies series is arguably one of the most well known masterpieces of modern art and a trademark of the impressionist movement. Monet painted this series in his garden at Giverny between 1900 and 1926, near the end of his life, but Monet’s fascination with nature and scenes of tranquil beauty move beyond his paintings of water lilies - and this gorgeous piece, In the Meadow is one such example, though in this case the focal point is firmly fixed on the individual and their peaceful, quiet surroundings.

It is known that Monet was interested in experimenting with the natural effects of light and colour on surfaces. He often painted several series of the same subject under different atmospheric conditions at different times of the day to study the ephemeral movement of light and to capture its diffuse quality. This work demonstrates many of the so cherished textural and painterly qualities of his work: where we can recognize a progressive dissolution of edges, typically characteristic: details dissolving into light and shadow, shapes being transformed into relatively formless patches of colour.

The result is a piece which captures the stillness of a sunny afternoon spent reading on one’s own, surrounded by the light chirps of birds, a slight breeze in the air, as the grasses and flowers lightly sway in the wind.

This oil on panel piece by Lawrence Alma-Tadema depicts two women in an opulent location but has more to focus on than first meets the eye. One is reclining on some cushions, and the other appears to be reading poetry aloud to her acquaintance. As a painter, Alma-Tadema was fascinated by roman culture and their way of life and this inspires the visual themes - such as setting, clothing and architecture.

The woman in the background appears not fully at ease; she is in a relaxed posture but her expression tells another story. Perhaps the woman in the foreground is reading something aloud to her to help relax or sooth her; were it not for the title of the piece one might even assume she was the bearer of bad news for the listener. In spite of the stoicism of roman culture and how they are generally portrayed as being warriorlike and fearless, in this piece it is clear that a close friendship, or a trusting relationship was a big part of the lives of the ladies depicted in the work; this extends to the roman people at large. Quite apart from the two people in the painting, the opulent location gives the piece an air of lightness or tranquillity - one can imagine the sea breeze coming through the window on the left, or the warm humidity of a summer’s day. Yet still the reclining lady is troubled; she is in the process of relaxing but isn’t quite there.

'A friendly chat with the enemy', the Christmas Day Truce of 1914 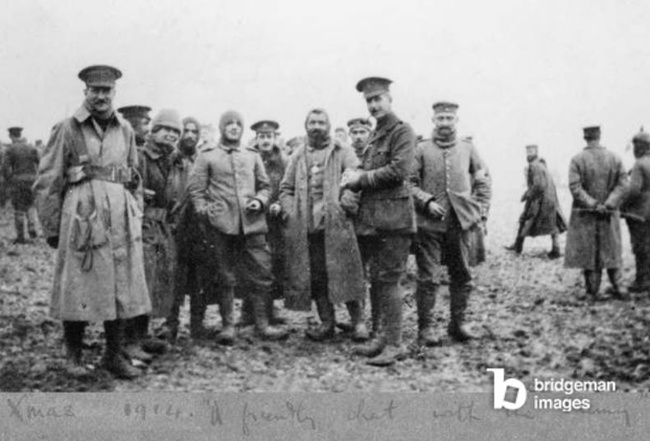 Just after dawn on a cold Christmas day in 1914 one of the most extraordinary events of the Great War was to unfold. It began with carol-singing in the trenches and both sides eventually ventured in “no man’s land” to mingle and exchange gifts. While this has been romanticised in the present day as huge groups of 30 vs 30 teams of players on both sides, the reality is that the famous truce was probably localised to only a couple of battalions on either side. However, the temporary ceasefire of The Christmas Truce came only five months after the outbreak of the war in Europe - and remains an enduring image of the triumph of man’s spirit over adversity.

Are you looking to licence art, culture and historical images? Bridgeman Images offers the highest resolution rights managed images for licensing. Please contact us for free image research or to learn more.

Explore the exquisitely detailed artwork of a leading British painter and modern master of the...
Read More

Explore a brief history of perfume and beautiful scent bottles in pictures – just as much a...
Read More