Folk Art covers a range of visual arts and is produced in the context of folk culture. Folk culture is traditionally practiced by small groups of rural people living in relative isolation from others. However folk culture has expanded into our global world and the movement now highlights a variety of different cultures. Folk art is often related to a sense of place with a focus on historical continuity. It manifests in a variety of ways including song, dance, clothing, mythology, architectural design and religion. The values of a society are reflected through folk art imagery. Artists who create folk art are often self taught and not concerned with the academic traditions associated with fine art. Folk Art tells us a story of minority cultures whether that be through portraits, landscapes or abstracted depictions.

This article has a section dedicated to Pippin Horace, a self taught American folk artist who produced many paintings that address problems with racial segregation. We will look at a variety of Folk Art images both contemporary and from the past whilst also spotlighting some other incredible African American Folk Artists and Folk Art Portraits!

Anna Mary Robertson (1860 - 1961), was a famous self taught, Folk American artist, known to the world as ‘Grandma Moses’. Her paintings depict scenes of rural farm life throughout the different seasons. A serene landscape by Grandma Moses sets the beginning of this folk art article as it presents the characteristics we will be looking at in a variety of images! These characteristics are simplicity, colour, movement and cultural narrative!

Folk art presents communities and their various cultural identities. This landscape painting below is by artist Konstantin Rodko, a Latvian painter based in the United States. The scene is a Russian one whereby rural country life is shown to appear as peaceful. Naïve art is another style associated with this type of painting. Naïve art is defined as a visual art that lacks formal and professional training from the artist. It is an aesthetic often associated with primitivism. The style shows new ways of seeing through bright, simplified portrayals. This image shows an open view of green hills and farmland. The scene is flat, although a sense of perspective draws the eye out to the middle of the image where a horse is attended to by a figure, beyond this are green hills and rows of neatly painted trees. Colour in this painting is flat and bold, there is a distinction between the dark brown trunks of trees and bright pinks from the shed in the bottom right corner.

Bright vivid colours and unusual primitive imagery can be seen in Keshida Layone’s contemporary painting, titled ‘Spiritual Freedom’. An intense yellow sun blazes down from the right top corner of the image. An abnormally large scale African lady floats in the water, waves rippling up her body. Her dark body contrasts against the blue sea/sky. This folk imagery represents human and nature as combined forces. A sense of energy is created from the figure moving in the sea and birds flying away.

‘Layone plays with reality and fantasy’, she is ‘fascinated by varied matters including the African diaspora, endangered animals, flowers and plant life and so much more’! - http://breatheart.gallery/about/

Sir Cedric Morris was a British artist. This still life of vivid limes and lemons in a ceramic bowl contrasts against a dark brown/red background. The fire place shown behind the bowl is eerie and holds a resemblance to African primitive masks and figures. An engagement with the spiritual world is a key motive in this folk art work.

African mask imagery has inspired many famous artists including Pablo Picasso. Picasso incorporated the forms and aesthetics from African masks and tribal sculptures into his cubist paintings as seen in the striking faces of Les Demoiselles d’Avignon (1907). 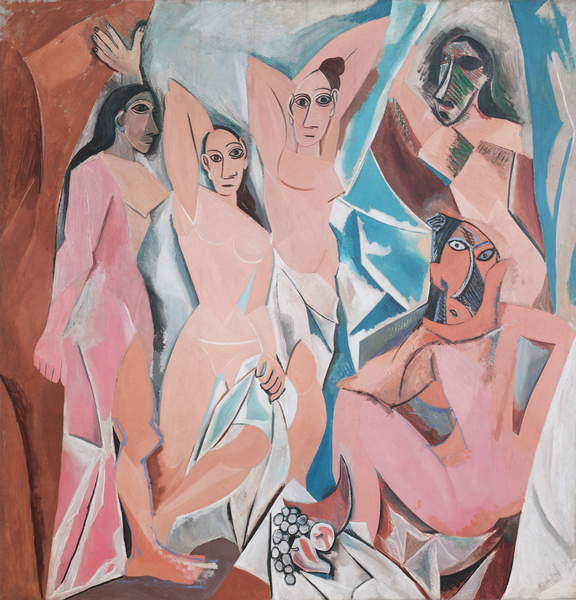 Adrian Wiszniewski is a Scottish artist and a member of the New Glasgow Boys, who emerged from the Glasgow School of Art. The movement within this painting below is powerful and lively. A man plays a musical instrument whilst another sits back and smokes.

Wiszniewski’s figure paintings are ‘redolent of fantasy and myth as they were attuned to the contemporary thought and everyday life’.

This expressive, colourful painting by Ikahl Beckford displays a woman in motion, in an act of dancing. The paint is used freely, creating a suggestion of dynamic movement across the pictorial surface. The abundance of colours creates an illusion of a carnival, the yellow outfit shining out from the image which contrasts against the elegant woman’s body.

This sense of movement is a continual theme in Ikahl Beckford’s work, as seen in this energetic painting below. Beckford’s work is reminiscent of folk art spirituality; she is able to capture energies and spirits on to the canvas, an effect remarkably evocative of futurist paintings. Bright colours are also characteristic of a primitive visual experience. The figures appear here as elegant, graceful and feminine.

Pippin Horace (February 22, 1888 - July 6, 1946) was an incredibly talented American folk artist. As a self taught artist he produced a range of works that address important racial concerns within the US. Horace grew up in New York and attended segregated schools until he was fifteen. He served in World War One and badly injured his arm, he had to learn to cope to paint with this struggle and saw painting as a form of rehabilitation.

‘The war brought out all the art in me’ - Pippin Horace.

This image below shows a painting by Horace, showcasing an African American family around a table, ‘Giving Thanks’. The image has dashes of bright colour, as seen in the red, green, blue blanket on the bed and red headscarf the woman seated is wearing. The painting evokes moods of home and family. The brushstrokes are visibly seen across the cabin walls, there is a sense of thick texture. More minute details can be seen in the rug placed on the floor and the patterns of the figures clothing.

This image of the painting ‘Harmonizing’, is particularly interesting as four African American men are depicted standing on the corner of a road. They are a Capella quartet singing on the street with smiles on their faces. The men are well dressed with their clothes appearing brightly coloured. Simplified depictions of houses, figures and the fence behind them relate back to the idea that folk art is simple yet intensely descriptive. A limited palette is used but colours still burst with bright display - this was Horace’s unique ability as an artist.

‘Pictures just come to my mind. I think my pictures out with my brain and then I tell my heart to go ahead’, - Pippin Horace.

‘Asleep’ by Horace is similar in genre style to 'Giving Thanks'. The painting displays two African American figures asleep in a bed in a grey room. The room appears very bare, a black curtain slightly ripped hangs above the bed. Horace includes stripes of shining blue and white stripes for the bed covers and red, green squares on the blanket. This pop of colour is the very characteristic that makes Horace’s style of painting unique. Contrasting colours have been used throughout art history but Horace’s painting explores this unusually through folk art genre imagery.

‘Cabin in the Cotton IV’ is a beautiful image. White cotton flowers are placed alongside white clouds and a white woman who wears a huge white traditional dress. A black man holds white cotton in a basket. The sky is a flat brilliant blue. the scene is painted with precision with little to no colour overlap.

Pippin submitted two paintings to his local art show - ‘the Chester County Art Association Annual Exhibition', and it was here that he was discovered as a gifted artist. Connections led to him to be associated with Moma curators Holger Cahill and Dorothy Miller and Philadelphia art dealer Robert Carlen.

Horace’s painting ‘Mr. Prejudice’ displays white superiority in America during the twentieth century and asks questions about American society itself. A scene of predominantly white characters is presented. A reference to the white supremacist group the KKK is present in a figure who is depicted wearing the klan's white hooded robes, with cut out eyes. Another white figure in the top center of the composition has a frown on his face and holds a hammer above his head. The statue of liberty is shown in copper as originally constructed (it took on its green colour in later years), but this could also be a comment on how the part of black people in American history is trivialised or forgotten. An African American man in the bottom left side of the composition is covered in white cloth across his entire body and mouth - a powerful image that could suggest the man has to conform to a white image and has to cover his identity, or that in spite of prejudices black people play just an important role in society as white people - as doctors, soldiers, and so forth.

William Matthew Prior was an American folk artist known for producing a variety of different portraits. This portrait of Mrs. Nancy Lawson is impressively painted and evokes deep contemplation.

Mrs. Lawson sits in centre frame, her presence calming and reflective as she stares out at the viewer. The colour in the painting is flat but some areas of the painting have significant details creating an illusion of realism. The eyes of Nancy Lawson are painted naturally, they connect the image from imagined space into reality and address the viewer directly.

William Sydney Mount was a 19th century genre painter from America. His portraits, landscapes and scenes are all inspired by everyday life. This intensely detailed portrait of ‘The Bone Player’ presents a musician in the act of creativity. The musician has a friendly appearance, his face appears idealised with white teeth and high cheekbones. This artwork was commissioned by the printers Goupil and Company, ‘for two pictures of African American musicians to be lithographed for the European market’. Mount had produced five life size images of musicians during the years 1849 to 1856, this was the last in the series.

The Bone instrument is associated with African American medieval musicians. The instrument is usually made of the materials of ivory, wood or natural bone that are then clicked together.

This folk art portrait of Venerable Pierre Toussaint is finely painted with an oval shaped frame, black and gold in colour. Pierre Toussaint was a Haitian-American philanthropist, hairdresser and former slave. He was a very popular hairdresser who served some of the wealthiest citizens of New York at the time. Toussaint arrived in New York in 1787 with his owners.  Pope John Paul II even declared Toussaint a ‘Venerable servant of God’.  Toussaint was exceptionally kind to his mistress Madame Bérard. On her death bed she asked her husband to promise that Toussaint would be freed from slavery.

James Northcote (22 October 1746 - 13 July 1831) was a British painter. This is a portrait of  the character Othello played by the actor Ira Aldridge. Othello by William Shakespeare tells the tale of a Venetian army. Othello is a brave soldier who comes from a Moorish background. Othello has a serious expression upon his face in this image, as he glances to his left, in an act of anticipation. Ira Aldridge was of African American descent, he was honoured a bronze plaque at the Shakespeare Memorial Theatre at Stratford Upon - Avon. He was remarkably one of only thirty three actors to be honoured this plaque.