Our Collection has a wide variety of images covering botany and its related themes, including fruits & vegetables, flowers and green shoots & vines. These elements exist as beauties of our natural world. We have forever been intrigued by their many colours and natural forms. In today's world, designers utilise the natural colours and forms around us, such as those found in botany (and even as simply as on fruit and vegetables) to evoke a certain mood or atmosphere. Hence, the brightness of yellow lemons can evoke summer and cheer, while pastel pink and purple & flowers may represent femininity. Images range from dazzling, bold colours to duller monochrome tones. Natural forms of botany have fascinated artists for decades, whether that be a focus on conveying the form as a realistic representation (such as in the drawings and paintings of artists part of expeditions around the world) or whether form is viewed with a modern stance through the process of abstraction - as many of our contemporary studio artists like to do.

In addition, artists have always been inspired by natural world aesthetics from the past and present, and have incorporated them into decorative paintings & drawings, scientific studies and photography. There is a wide range of botanical images here at Bridgeman, some of which derive from the contemporary art of today to seventeenth century paintings and studies. We now live in a world where a variety of artistic styles live ubiquitously together, allowing us to reflect on different motifs when considering one subject, in this case ‘Botany’.

In this article we will provide a glance at the different types of botany within the collection and explain how artists have used botanical subjects in their works to explore the use of painterly styles, illusion, photography, pattern, colour and linear form.

‘There is something infinitely healing in the repeated refrains of nature’, Paul Brooks, Rachel Carson (1972). ‘The house of life: Rachel Carson at work’. 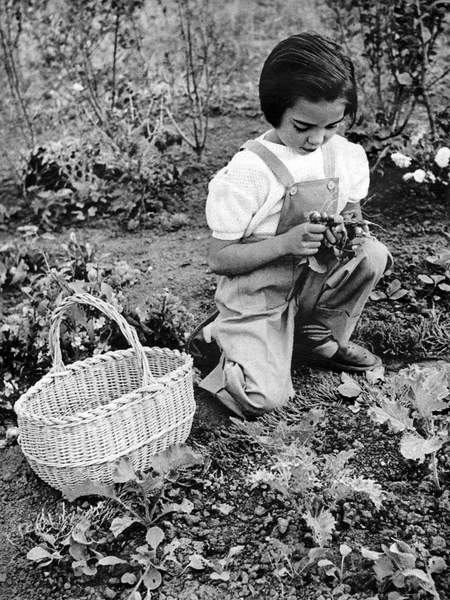 Different types of Botany in the Collection

Fruits have always been a natural component of still life depictions. They were seen as material objects intended to relate to a wealthy audience in the seventeenth century. The most common of fruits depicted in seventeenth century still life artworks are oranges, lemons and artichokes. Exotic fruits symbolised trade advancements specifically - these included pomegranates & pineapples which remained a symbol of wealth well into the 19th century.

Fruits are particularly interesting to paint and draw due to their vibrant colours and variety of shapes and forms. 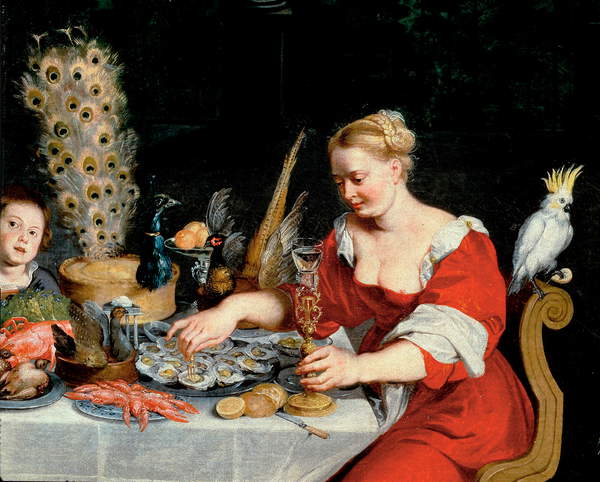 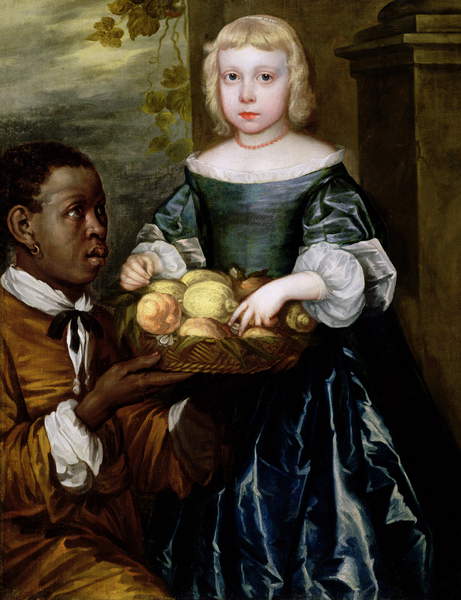 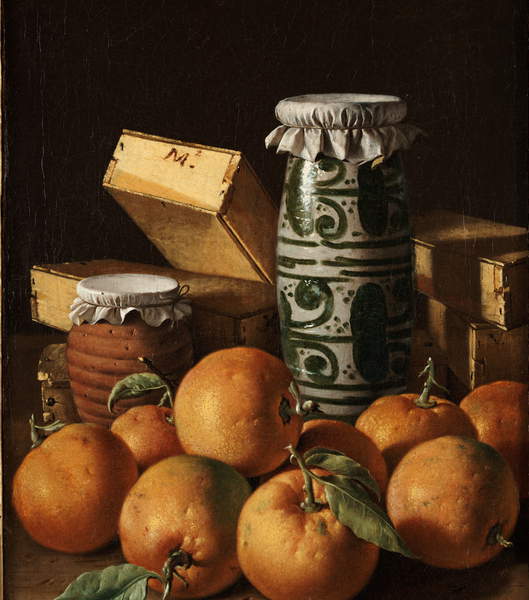 Early Twentieth century paintings such as Louis Valtat’s Still Life in the Oil Shill also include painterly depictions of oranges and lemons on a brown table in the foreground. Valtat was a Fauvist painter - ‘Les Fauves’ translated to ‘Wild Beasts’ , this moniker references the shocking qualities that this style of painting brought to a current viewer at the time. The brush strokes are intensely visible and emotional expressionism is a key tactic used within this painting.

‘The chief function of colour should be to serve expression as well as possible’, Hal Foster and Rosalind Krauss, Art Since 1900, 1906, Thames & Hudson College, p.75 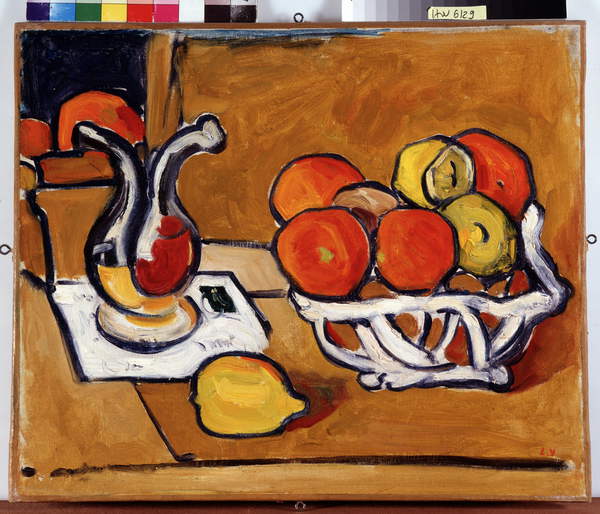 Contemporary artist Yoko Honda’s digital illustration of pineapples and parrots are repeated across the entire image. Fruit here is highly decorative and provides yellow bursts of colour amongst the fresh growth of green leaves. The pineapples, leaves and parrots emerge with striking colour out of a backdrop of darkness in a contemporary design highly indicative of current visual trends. 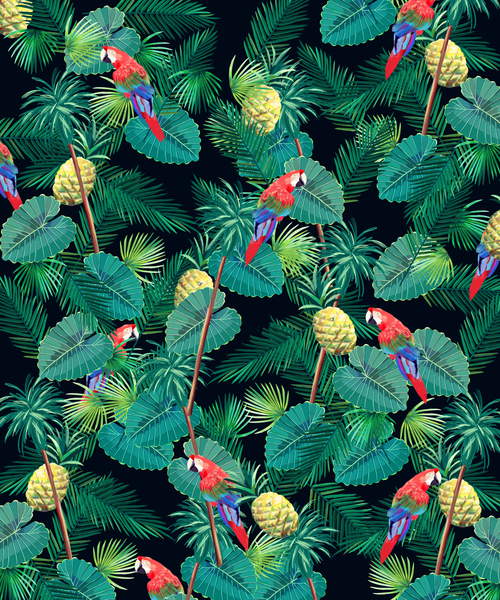 Flowers across the centuries have been painted with illusionist qualities to enhance their delicate form and texture. Throughout the sixteenth and seventeenth centuries, artists painted individual, exquisite petals appearing almost flimsy in form. In addition, when one considers a prominent feature of period artwork - portraits - flowers provide a painting with a decorative feature, pops of colour and a contrast with a more baroquely painted human figure.

This portrait below shows an association with flowers alongside a young woman, as here flowers are symbols of fertility, love and trust, which is still a theme commonly used today.

‘There is a sense of awe elicited by a Dutch or Flemish Still Life Painting, they wanted to convey the delicacy of a rose petal’ Richard Leppert, Art and the committed eye: culture, society and the functions of imagery (Boulder and Oxford MA, 1995) 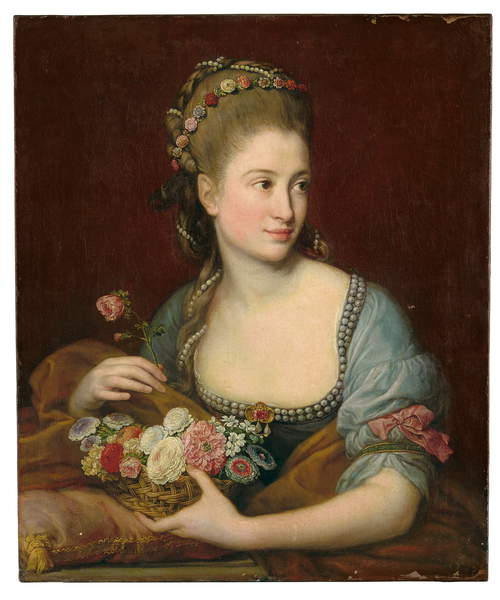 On a less conceptual level flowers are also used as decorative accessories.- adorning jewellery and clothing, or as they are typically worn in a fashionable headpiece known as garland. A garland is composed of a variety of flowers, foliage and leaves. While often worn on the head, they can also be hung up for display or laid for religious and societal importance.

Alphonse Marie Mucha was a Czech painter, illustrator and graphic artist. His painting Four Seasons: Spring is characteristic of the Art Nouveau style, which makes use of a long, organic sinuous line. An elegant young woman poses amongst a blossom of pink and white flowers, some situated upon her head and others trailing against her loose, dainty white dress.

Birmanie (1984), is a black and white photograph with the white colours of flowers shining through. Situated on the young girls head, they are an effeminate symbol which indicate purity or innocence. The girl’s eyes are directed towards the viewer and she smiles with two hands situated near her chin, almost staged. 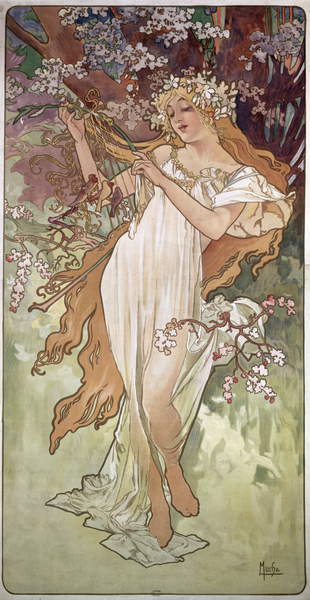 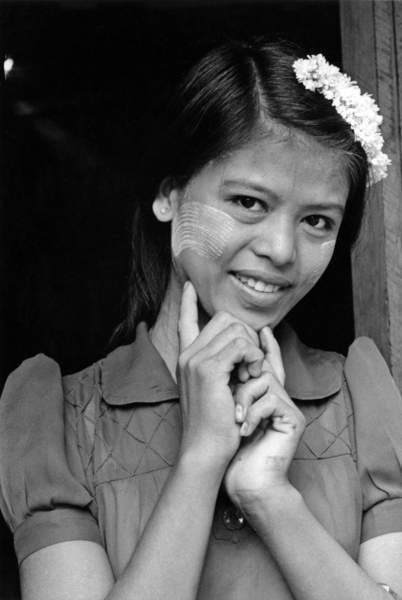 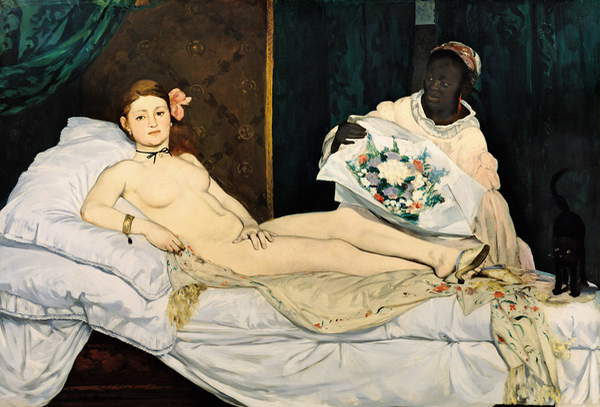 Art and science have overlapped repeatedly in past centuries. Studies of plants by artists can appear sometimes methodical but also often have a scientific function - creating a detailed, intricate record. Without the existence of the camera, botanical illustration was the dominant way of recording what a species looked like or identifying new ones, and the work of many travelling artists from our various collections makes for fascinating viewing. You can see a compilation here from the British Library.

Artichokes are a type of green vegetable consumed by humans since the days of Ancient Rome and Greece. They have been illustrated in elaborate and intricate drawings as well as many still life artworks and portraits. Leaves of artichokes are strong and multiply in a series of layers, with a soft heart at their core. Artichokes are known to symbolise prosperity and renewal. The vegetables are complex in form which artists approach with vigour for their works. 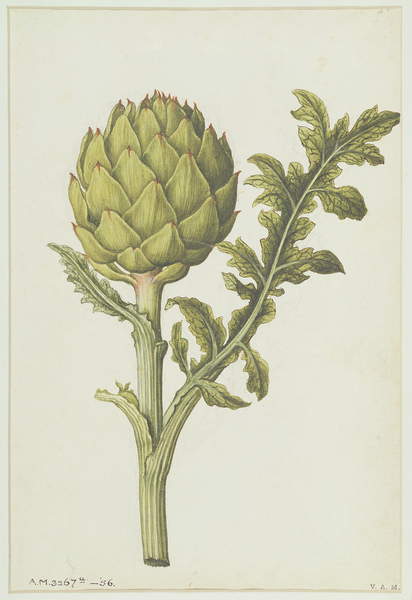 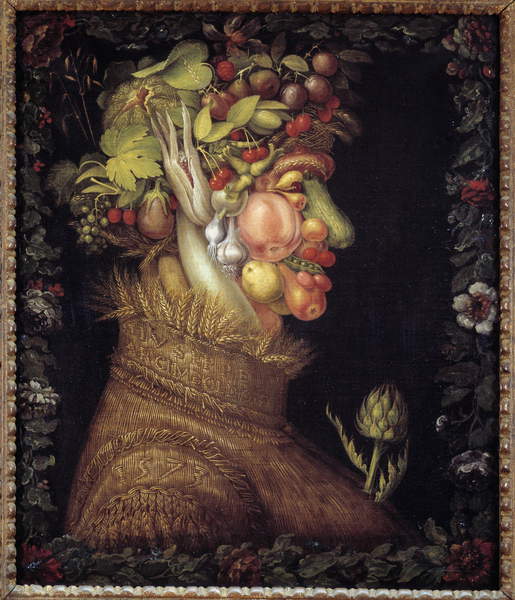 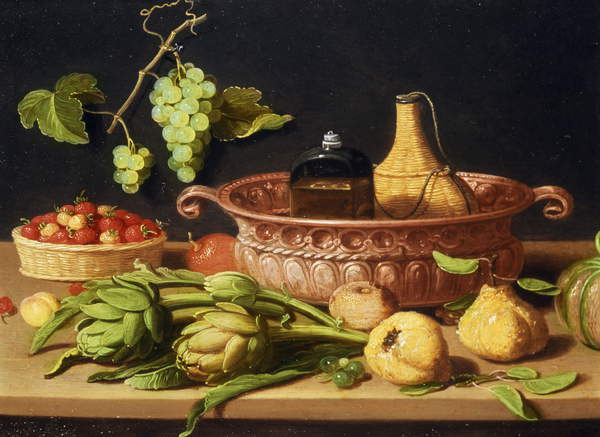 A Cactus is a sharp succulent type plant with a rounded and full shape, a member of the family of Cactaceae. Exotic and native to the Americas, its distinctive form is unique and is today widely utilised on products, publication covers and television programmes associated with certain regions of America. The plant has been used in the Americas for medicinal purposes and a source of food and water since ancient years. Artists are inspired by the cactus and its foreign identity, displaying the green plant in solo or multiples, typically amongst more colourful or desert type landscapes. 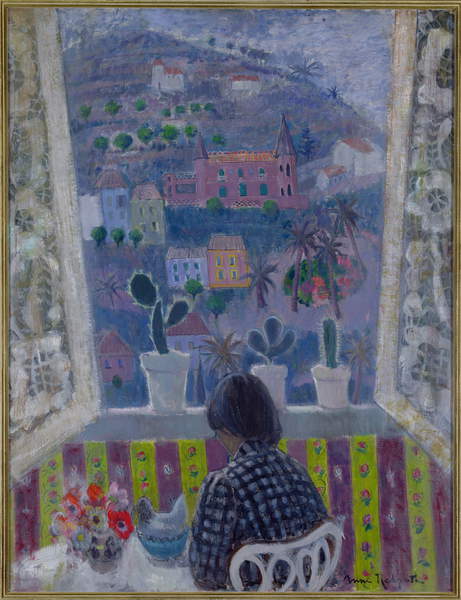 Abundances of leaves also create a variety of well defined patterns. Leaves as individual entities are unique in design. They come in a variety of shapes, some long and elongated, others sharp and crisp. Types of leaves include the species of Palm, Lotus, Holly and Elm.

Leaves change across the winter, spring, summer and autumn marking the ever changing nature and transcendence of life. Winter leaves are sparse - many trees appear almost completely bare due to cold frosty weather. Spring leaves start to bud, creating beautiful blossoms in particular species such as Malus ‘Royalty’ and Malus Domestica ‘Arthur Turner’. Leaves are also bright green in the spring and summer months. In English Autumn, we receive a beautiful ochre, crimson type of leaf amongst our trees creating moods of renewal and reflection, as seen in Georgia O'Keeffe's painting My Autumn, 1929. American modernist artist Georgia O’Keeffe is well known for her amplified, large depictions of big flowers. Her paintings are focused on a few large sections of simplified forms. Her love for beaming colour pioneers this style of precision within modernism. 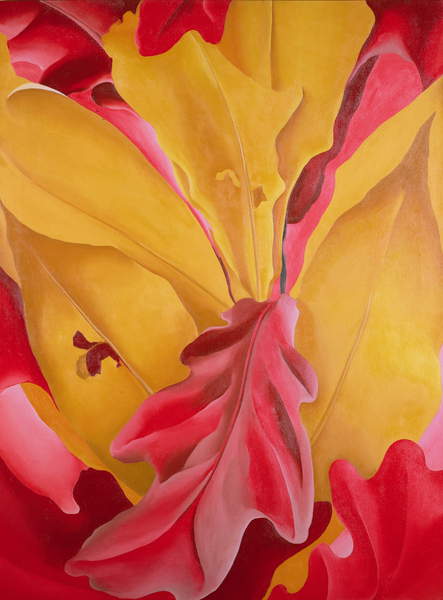 ‘Nobody sees a flower - really - it is so small it takes time - we haven’t time - and to see takes time, like to have a friend takes time’ Georgia O’Keeffe 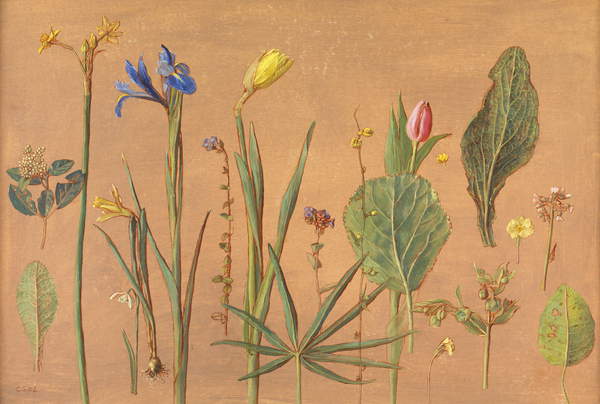 Many botanical images in this list are attributed to British textile designer, poet, novelist, translator and social activist William Morris. Morris is famous for initiating the Arts and Crafts movement that emerged in 1860. The Arts and Crafts movement was aimed towards a wide audience and attempted to reform design and decoration in mid 19th century Britain. All of Morris’s wallpapers are printed by hand. The designs - each sumptuously detailed and intricate - are smoothly repeated through a particular method of lining up each design and printing the woodblock motifs again and again. John Ruskin, the art critic heavily inspired Morris through his writings, particularly by a chapter titled ‘On the nature of Gothic Architecture’ in his book ‘The Stones of Venice’.

Morris’s patterns as shown in this list are floral and derive from a combination of different colour matches such as pastel light pinks and white or more vivid displays of bright red roses with yellow and green floral designs. The depiction of flowers and leaves are perfectly delineated, no lines blur together and colour matches are intact to their form. This repetitive nature of design stands out in his works, and makes him a popular choice for our product clients.

‘Have nothing in your house that you don’t know to be useful, or believe to be beautiful’ William Morris 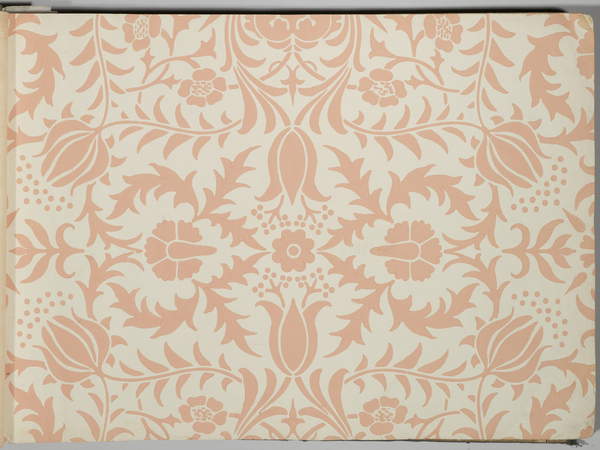 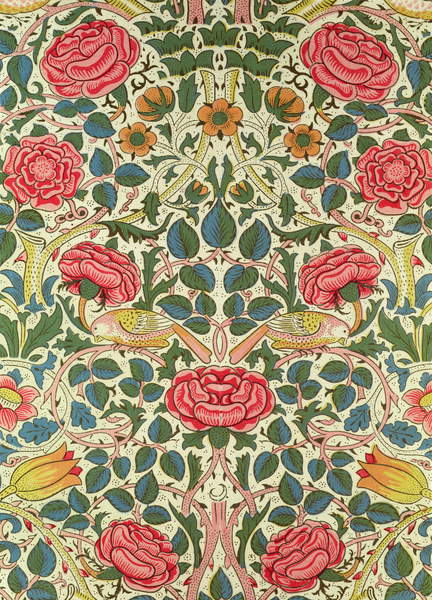 Domestic plants are becoming increasingly popular today, and in our technology-heavy culture we're grateful and lucky to be able to enhance our workspaces and offices with plants. Plans allow us to reflect on our surrounding material world and bring a sense of tranquility and calm to interior spaces - a sense that nature is combined with the human domestic spatial living area. Ludvig August Smith was a Danish painter well known for his genre painting, equating to typical depictions of everyday life. A woman in the painting above dresses her daughter whilst she admires the bird in the cage; in the scene there are red roses and a trail of delicate leaves up a pale yellow wall.

Plants also soften the look of interiors and provide a physiological benefit to one's mental wellbeing. They can also provide luck to a home. In Laurits Andersen Ring’s painting, a woman is shown reading the newspaper in her kitchen. A large plant with outstretched, flowing leaves is situated to her right. The tree represented in the back window translates well with the interior with the plants providing a direct connection to the natural world outside. Plants are also beneficial to the design of a room - for example the green room in August Smith’s picture coincides with the blue chair and cupboard; colours are harmonised. Though nature is present in our immediate surroundings, gardens and mazes offer us an artificial view. A hedge maze - also known as a classic labyrinth - is constructed out of tall green hedges so you can not see the end of one's path. ‘Labyrinth’ derives from the Greek word ‘Labyrinthos’, its construction originates from Greek mythology whereby King Minos of Crete wanted to keep a caged Minotaur. A Minotaur is a mythological creature, believed to have the head and tail of a bull and the body of a man.

Labyrinth paths exist in our modern day world physically and through paintings, both full of excitement and mystery. These images show a selection of different mazes, all characterised by linear, straight and curved lines. Hedge mazes and topiary gardens feature in a huge selection of work in the archive from renaissance paintings to contemporary favourites. 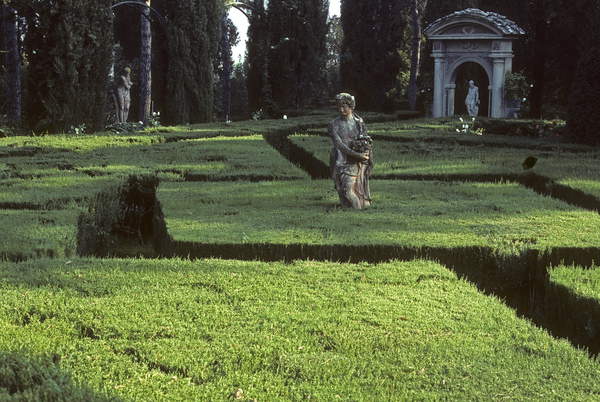 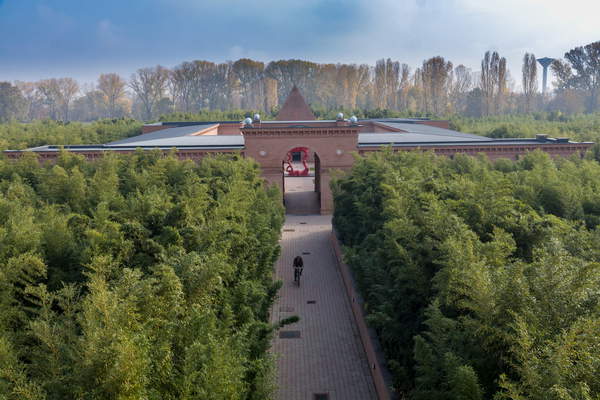 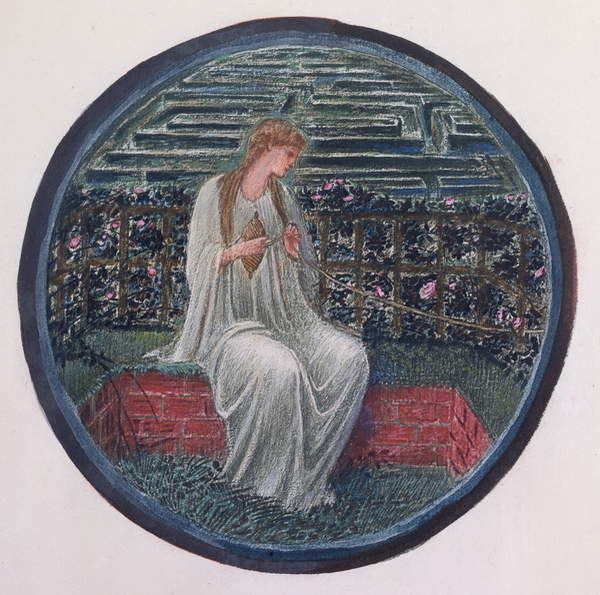