Lavinia Fontana (1552-1614) was an Italian painter of the Mannerist school and one of the most important portraitists in Bologna during the late 16th century. August 2014 will mark 400 years since her death so it seems timely to examine her paintings and life as a female artist in the Renaissance period.

She was remarkable in being one of the first women to execute large, publicly commissioned figure paintings. However, it is the artwork below that catches your eye. It is titled Portrait of a Girl Covered in Hair and it is now in the Musée du Château, Blois, France. 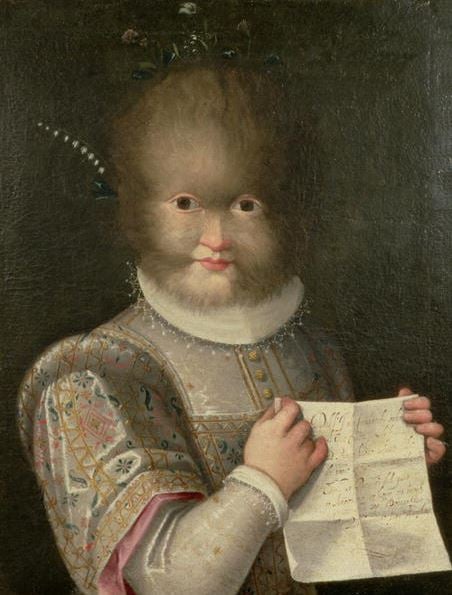 This bizarre portrait is of a real girl. Antonietta Gonzalez (1594-1595) and her family suffered from a rare genetic condition known as hypertrichosis or “werewolf syndrome.” Luckily, due to the belief that divine purpose lay behind their unusual appearance, instead of being ostracized, they were welcomed into the courts of Europe. Historians have speculated that Lavinia Fontana met Antonietta in Parma.

Antonietta explains a little of her personal history in the handwritten note which she holds in the portrait: “Don Pietro, a wild man discovered in the Canary Islands…”

Some writers call Lavinia Fontana the first professional woman painter in Western Europe because her career, heading a workshop, receiving commissions and painting a wide range of subjects is similar to the career of a male artist.  Sofonisba Anguissola (c.1532-1625) was one of the first women to gain international fame as an artist but mostly specialised in portraiture.

Particularly unique is that Fontana painted mythological subjects, and in this context, became the first woman to paint female nudes.  She did, however, paint a large number of female portraits, and in the course of doing so, documented the lifestyle of Renaissance women. 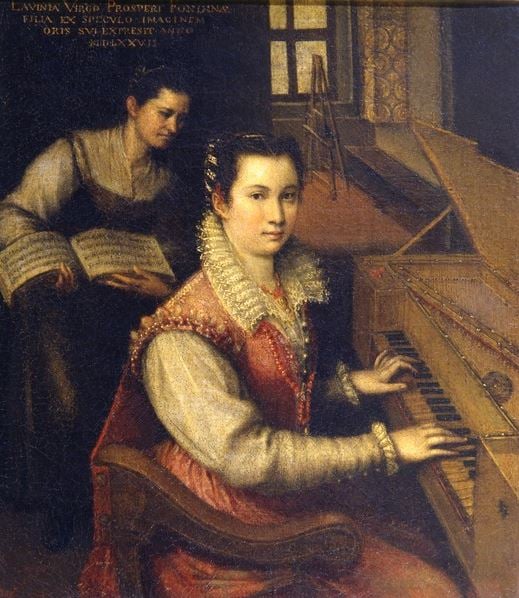 Auspicious beginnings
For a woman to become an artist during the Renaissance was unusual but Lavinia had the advantage of being trained by her father, Prospero Fontana, a cosmopolitan fresco artist. Lavinia also had the good fortune to be born in Bologna, an important Italian artistic centre that claimed the painter Catherine of Bologna as their patron saint and which had welcomed women to its university since its opening in 1158.

Prospero understood that the right marriage was crucial for Lavinia’s future success as a painter and sought connections with a family of good social standing that would accept Lavinia’s career. Fontana married the minor painter Gian Paolo Zappi, who helped tend to the couple’s many children and eventually assisted her in future works. It is probable that Lavinia’s self portrait was created at the start of the search for her future husband and Lavinia’s artistic accomplishments are prominently displayed. The speculation of her future earnings as an artist were accepted in lieu of a dowry. 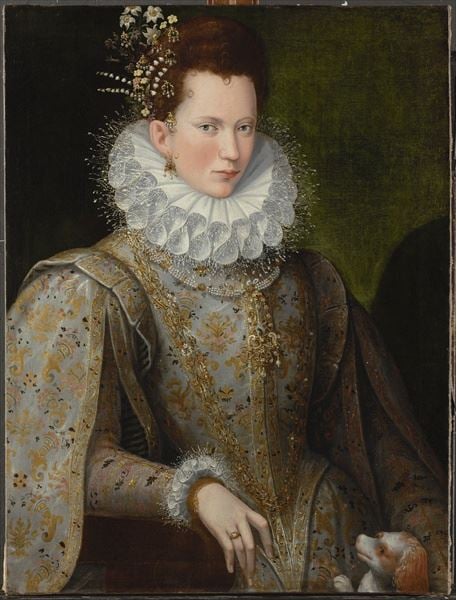 We can recognize some of her portraits as being a future bride.  The painting would serve as a record of the upcoming marriage as well as a visual record of the wealth going into the marriage via the finery of her costume.  A later stage of life, widowhood, might be painted as well. The Portrait of a Widow shows us a wealthy woman dressed lavishly in sombre colours to reflect upon her husband in a manner which would befit his memory; the handkerchief shows that she has cried tears. Dogs were used as a symbol of marital fidelity, even if it was just in memory.

From Bologna to Rome

By the time she reached her thirties, Fontana was respected as a painter of devotional art.  Among the best of her religious paintings is Noli me tangere (1581) meaning  “don’t touch me”, the Latin words spoken, according to John 20:17, by Jesus to Mary Magdalene. The poses show a knowledge of Florentine Mannerism but the sensitivity of colour appears to be borrowed from Venice. It is a calmly expressive piece now hanging in the Uffizi Gallery.

Her contemporaries and patrons, such as Pope Gregory XIII held her such high regard that she was elected to membership in the Roman Academy.  Of the over one hundred works she is credited with producing, only 32 are signed or dated.  Fontana and her family lived in Rome until her death in 1614. 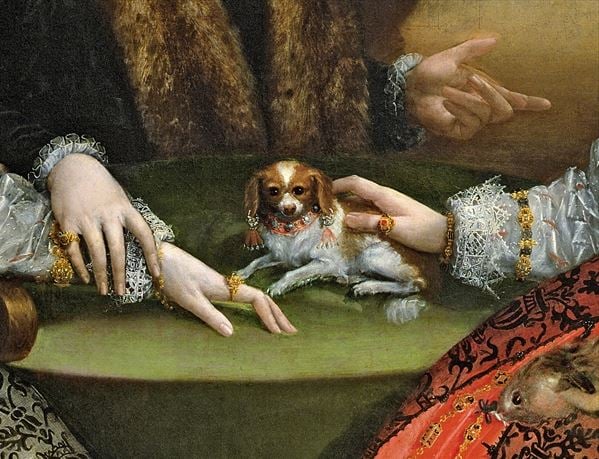 View all of Lavinia Fontana’s works in the Bridgeman archive

View our Pinterest board – Important female artists within art history.

Modigliani: The man behind the mask – bridgeman blog

At the 95th anniversary of Modigliani’s death (January 24) we take a look at the man behind a...
Read More

Life and work of one of the lesser known Impressionists, Berthe Morisot (1841-95). Self...
Read More