Earth Day is an annual event held on April 22nd to demonstrate support for environmental protection. In this article we will take a look at spotlighted artists within our collection whose works or practice are inspired by themes of climate change, the environment and sustainability.

Diana Ong creates contemporary digital art. Her works are often characterised by bright, bold colours. Diana manipulates her images through modern digital technology. Gone Fishing shows two figures in a small boat in a dark blue sea, holding fishing rods. Three huge fishes and a red hook appear in the sky. This imagery explores the concept that fishing in our oceans has a great impact on the Earth. The placement of fish in the sky creates the awareness that sea life keeps our oceans healthy and provides us with oxygen. Red contrasts against blue tones creating an intensely vibrant daytime scene.

Cassio Vasconcellos is an incredible Brazilian photographer. His career began in 1981 when he started working on artistic projects, photographic journalism and aerial photography. Vasconcellos also became a co-founder of the Fotospot Gallery in 2011. His works have won many awards, including the Porto Seguro Photography Award in São Paulo, Brazil. The Amazon Rainforest is the world's largest tropical rainforest located in parts of northwestern Brazil, Peru, Colombia and other South American countries. Amazonia has made recent headlines in relation to the major impacts it has faced due to climate change. This has included increased temperatures and more deforestation. Amazonia is shot in high definition and presented here as a natural wonder as the photograph displays beautiful green trees with a clear reflection in the water below.

Olafur Eliasson is a Danish-Icelandic artist known for his large-scale installation art and sculptures that are concerned with employing elemental materials such as light, water and air temperature. All factors combine to enhance a viewer’s experience in a different way at different times of the day. Eliasson’s art considers climate change as seen in Inside the Horizon. The installation is placed in The Louis Vuitton Foundation Building and is permanent. It consists of forty-three triangular columns that run the length of the colonnade of the museum’s subterranean grotto. Bright yellow radiates out from the repeated columns creating the illusion of one walking through the Earth’s horizon. Eliasson’s work is driven by his interests in movement, embodied experience, perception and the feelings of self.

‘As visitors move through the work, the play of reflections between the mirrors creates a kaleidoscopic effect that dematerialises the surroundings’, Studio Olafur Eliasson

Olly and Suzi are two British collaborative artists who track, paint and photograph endangered species in the wild. In 1987, Olly and Suzi met as fine art degree students at Central St Martins School of Art in London. In 1994 the pair gave up their London studio and embarked on a ten year period of art making expeditions. The passion of both artists to track the most endangered creatures on the planet led them to the remote Arctic, desert, ocean and jungle habitats of seven continents. The Canadian Arctic is presented here in this image, we see the ice melting and the two artists creating a painting that will float on the icy cold waters surface. Photography of the artists producing the work is as much a part of their practice as the paintings themselves.

‘Their interest in nature is poetic and innocent, rather than melodramatic and pumped up. What I like about their produce is the way it seeks to preserve nature’s delicacy and preciousness’ Waldemar Januszczak, Sunday Times.

Xavier Cortada is an American artist. His works are intended to create awareness and action towards the issues of social injustice and global climate change. Cortada has created art installations at the North and South Poles to address environmental concerns. He also collaborates with scientists in his art making: he serves as a collaborator on the Antarctic McMurdo Dry Valleys LTER (Long Term Ecological Research) project. This painting below shows a polar bear’s struggle as sea ice declines. A white/yellow polar bear stands on a small block of ice surrounded by bright blue melted waters. For a polar bear, sea ice is a crucial platform for life as they use the ice to travel long distances. Ice in the artic has declined due to climate change, therefore leaving polar bears to suffer with minimal access to food.

'In 2008, Xavier planted a green flag at the North Pole to reclaim it for nature and launch an eco-art reforestation effort.' Cortada.com

Eric Lafforgue is a French photographer who has documented the Guna people of the San Blas Islands, off the coast of Panama, whose existence is threatened by rising sea levels. Lafforgue has also photographed many images of North Korea. This image below shows a Burchell’s Zebra, a southern subspecies of the plains zebra. The species population is stable but in most countries zebras have declined rapidly. The image shows a zebra amongst a field of green grass.

Edwin Butler Bayliss (1874 - 1950) was an English Artist born in Wolverhampton. Bayliss was based in the Black Country, an area located in the English West Midlands. He is famous for his drawings and paintings of industrial sites in the area. He is described as ‘The poet painter of the Black Country’. This watercolour of The Chimneys presents the heavy pollution found in the Black Country. Brown and white smoke extends out from the chimneys, covering the vast sky above. A path at the foreground of the painting winds back into the distance, leading the viewer to the industrial plant. There is a sad melancholy to Bayliss’s works but he also manages to capture the essence of beauty in the region. Green hills seem idyllic at a first glance, with the eye then tracing to the industrial slim chimneys and clouds of smoke.

‘The smoke that swirls through his images combines with his loose, expressive brush work and pencil work; creating an atmosphere that recalls French Impressionism’ Wolverhampton Arts & Culture.

Frances Ferdinands is a Sri Lankan born Canadian artist. Ferdinands has produced many acrylic paintings and exhibited them for over three decades in diverse locations including New York, London and Paris. Her works are often created in a series and they all express her concerns regarding the social and environmental conditions of postmodern society. Silk Roads presents a colourful composition. The work is made up of bright contrasting colours, patterns, huge green leaves and an elephant and camel. Ferdinands' art is abstract, representational and telling.

‘Frances Ferdinand’s work is characterised by technical facility, richness of colour, and breadth of vision. She addresses subjects of profound universal significance, yet does so through personal metaphor and imagery. Engagements with her paintings is always a satisfying and enriching encounter’ Ontario Arts Council.

Mark Adlington is a London based artist who travels extensively in search of wildlife, which has been Adlington's primary interest ever since early childhood. He has captured the magnificent beauty of wonderful endangered creatures in the wild including tigers, lions and polar bears. This stunning image displays a huge Bengal tiger with fabulous detail. An orange background compliments the orange fur and yellow eyes of the tiger. Its black stripes also contrast well. The Bengal Tiger can be found in Bangladesh and India, however they also live in Burma, Bhutan and Nepal. The species is the second largest of all living tiger subspecies and unfortunately endangered. The main threats that these tigers face are habitat loss and poaching.

‘Mark Adlington has developed a fluent style that captures the movement and volume of animals in motion’, John Martin Gallery, London

Hapshash and The Coloured Coat

The iconic psychedelic Hapshash and the Coloured Coat were an artistic duo consisting of Michael English (1941-2009) and Nigel Waymouth (b.1941). Together they became a graphics team doubling up as a rock group called Hapshash and the Coloured Coat, whose iconic psychedelic posters helped to define the aesthetic of the era. Whereas many designers of the 1960's tended to throw together psychedelic iconography without a second thought, Waymouth and English both had artistic careers prior to their involvement with this project and brought their combined expertise to their new screen prints, which regularly contained imagery and messaging in line with the contemporary 'hippy' movements, such as 'Save Earth Now' and related sentiments. Their works have become synonymous with the psychedelic 60's and define an era. 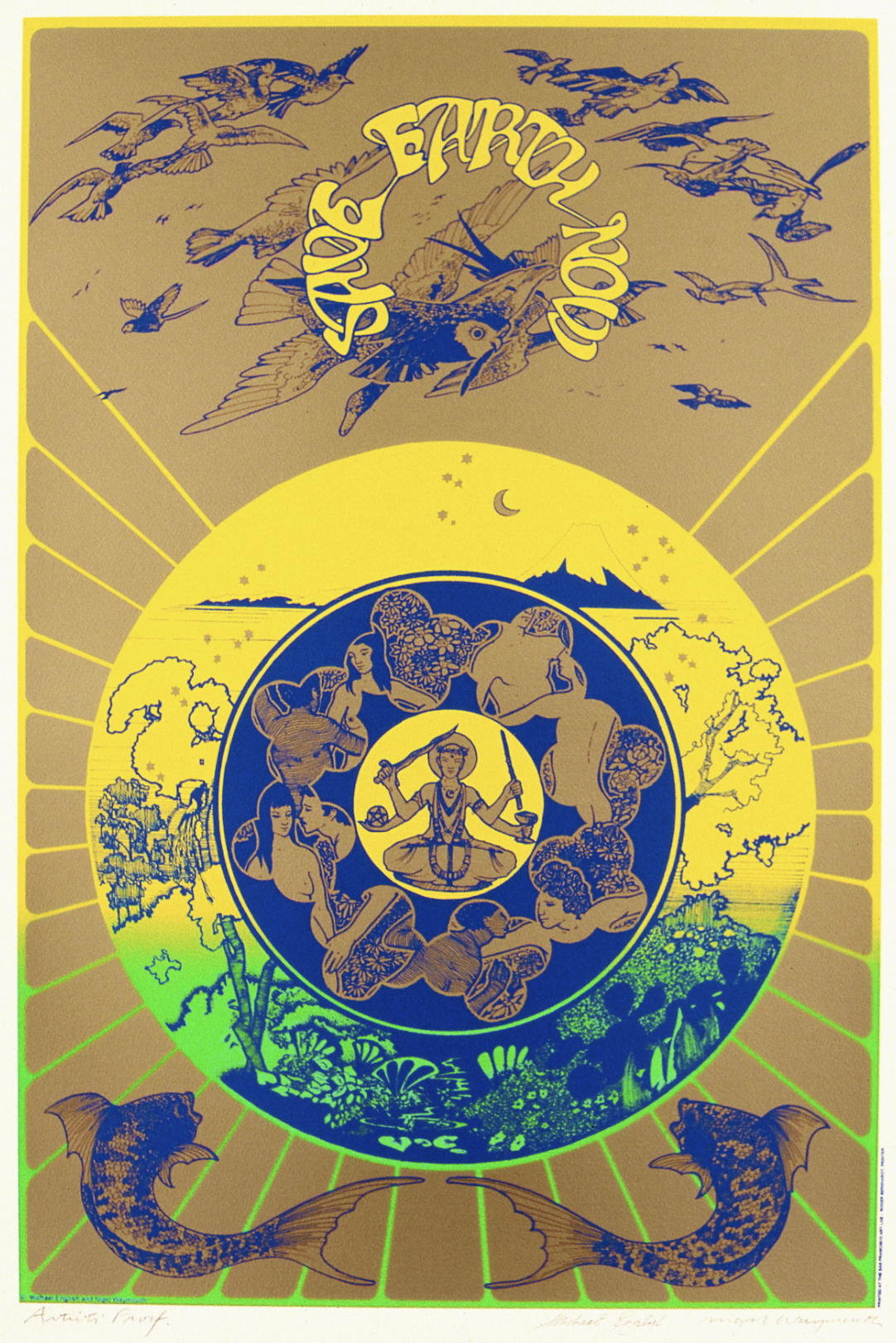