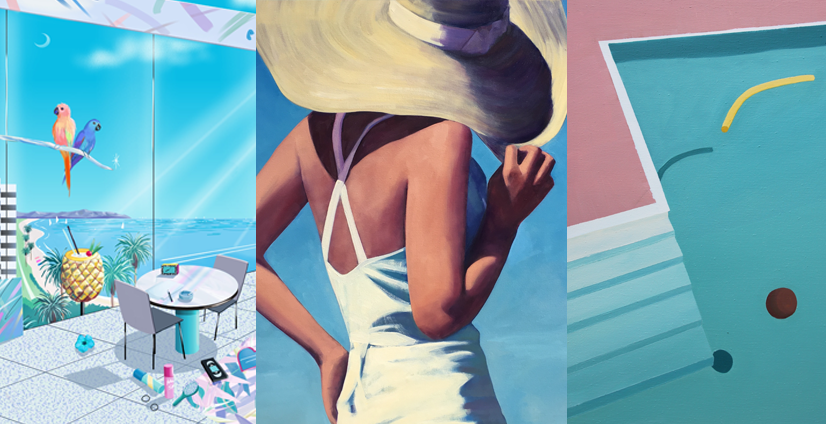 Sprightly Summer: Summer in Art from modernism to the present

The season of summer, its effect on the environment, and the culture associated with the warmest time of the year has inspired artists for centuries. From impressionist depictions of summer gardens and beautiful bridges to modern interpretations of childhood summers spent enjoying beach sunsets and ice cream, step into our world of summer inspired artwork and art evoking a sprightly, energised feeling from around the world.

PATRICK HUGHES
Patrick held his first solo show in 1961 at the Portal Gallery, London. It was the first one-man show by a Pop Artist, though Hughes points out ‘they were not even called that then’. A few years later, Hughes made two seminal reverse perspective works, Infinity and Sticking-out Room. In the 1970s Hughes’ name became synonymous with rainbow paintings, which also became very popular as prints and as postcards; people enjoyed them as decoration, but for Hughes the rainbow represented a solid experience.

In the late 1980s Hughes revisited exploiting the difference between perspective and reverspective and solidifying space. For the last 25 years his 3-D reverspective paintings have been hugely in demand, exhibited around the world and featured in many public collections. The experience of seeing a Patrick Hughes sculptured painting in reality is really to experience unreality and the paradox of illusory space and movement.

DIANA GOMEZ
Born and raised in Caracas, Venezuela and developing her visual career in London for the last 17 years, Diana had the great fortune of growing up surrounded by colour and nature in a big developing city.
From an early age she studied in a musical school, and her passion for people and the arts made her enroll in a photography degree when she was a teenager. Influenced by great filmmakers and her love for humanity, people, nature, music and narratives, Diana’s beautifully lit and colourful images capture a sense of optimism, power and beauty that portrays her sitters in a confident and engaging way. Diana has photographed many personalities in the music, art and film worlds including Rihanna, Phoebe Waller-Bridge, Will.I.Am, HAIM, Selena Gomez, Taylor Swift, Caroline Vreeland, Rosario Dawson, Grayson Perry, Nigella Lawson, amongst others.
Her philanthropic work includes contributions to books such as Radical Beauty: exploring beauty and Down Syndrome, organisations such as The United Nations, Teenage Cancer Trust, The Art of Elysium, amongst others.

HAPSHASH AND THE COLOURED COAT
The iconic psychedelic Hapshash and the Coloured Coat were an artistic duo consisting of Michael English (1941-2009) and Nigel Waymouth (b.1941). In 1966 Waymouth, a graphic artist, launched the now legendary King’s Road boutique Granny Takes a Trip, for which he designed clothes as well as the regularly changing shopfronts that were its signature feature. At this time, Michael English’s epiphany was a moment in the King’s Road when he chanced upon Waymouth painting the facade of Granny Takes a Trip, which became London’s first psychedelic boutique. Together they became a graphics team doubling up as a rock group called Hapshash and the Coloured Coat, whose iconic psychedelic posters helped to define the aesthetic of the era.

T.S. HARRIS
Aptly called “Sunshine Noir”, T.S. Harris’ paintings speak to the central issues of human existence – desire and loss, impermanence and beauty, and the many dimensions of our connections with others.
Inspired by snapshots and film stills from the mid-century, the paintings are colourful yet bittersweet, depicting fleeting moments captured almost a lifetime ago. Suspended in time, Harris’ stylish and elegant cropped figures put on scarlet lipstick, dream by the pool or sit in contemplation. With the context of their actions removed, the women and figures become mysterious; they are alluring not only for their figures, but for the secrets that they hold.
Raised by two professional artists, Harris’ art career began at an early age. Initially showing in her family’s gallery and then branching out into other venues, her work has since been featured in museums and galleries nationwide, book covers and magazines, and the movie, The Face of Love. Harris lives and works in San Luis Obispo.

PETER GRAHAM
Well known as being one of Scotland’s most gifted and distinctive Modern Colourists, Peter’s work is highly personal, almost eccentric, for he uses rich greens, Mediterranean blues and fiery reds which are played off against each other in contrasts which bring dynamism to a remarkable maturity of style.  His work is related to the Scottish School, but he has a flamboyant form which is very much his own. His broad wide brushwork combines with looser, more fluid strokes to give his paintings a strong design element, although working ‘en plein air’.
Colour has taken the dominant role for Peter as his work develops, and he has recently delved deeper into the still life genre, creating some of his most stunning compositions, still with colour the dominant theme. His painting seems effortless and intuitive, which is the key to his unique style, attempting subjects that other artists would shy away from.

DAVID MCCONOCHIE
David McConochie is a freelance illustrator and artist. Originally from Durham City in the North East of England, McConochie graduated from The University of Teesside and subsequently Central Saint Martins School of Art and Design.

OSINACHI
Osinachi is a self-taught digital artist whose work explores personal experiences within a technological environment. Osinachi, who grew up in Aba, Nigeria, produces drawings using Microsoft Word, where he utilises the basic limited design palette of the word processing software to create narrative illustrations.

CHRISTABEL BLACKBURN
London based artist Christabel Blackburn is an artist who studies and specialises in the human form. After finishing her degree in Classics at Newcastle University she learnt portraiture in Florence. Embracing this traditional foundation in drawing and sculpting techniques, she completed a further two years at the London Atelier of Representational Art.
Influenced by Edward Hopper’s realism, photography by Philip-Lorca diCorcia as well as David Hockney’s architectural traits, Christabel’s work has evolved dramatically over the last ten years. Her strong sense of observation has enabled her to refine her technique, paring down detail yet still capturing the very essence of people in their environments and the symbiosis between the two.  Be it a lone figure in a gallery or a child in an urban park, the stillness she portrays in her everyday scenes draws the viewer in and like photography, holds you in that moment in time. The intimacy she creates pulls you closer, giving you a greater sense of the people in the picture, their thoughts and their feelings.
The simplicity of her work often conveys the loneliness and anonymity felt in a crowded city as well as challenging the impact of mental health caused by this digital age. Christabel’s scenes transcend the everyday; they are stories about society and how we live our lives.

LAURA JAMES
Laura James is a self-taught painter living and working in New York City. She is a visual storyteller who explores biblical subjects, cultural issues and secular themes through her unique contemporary use of the traditional art of Ethiopian iconography. Her goal is to have her art in churches and public places where black people can actively see themselves included within the stories of the Bible.
Laura creatively re-contextualises the Christian message to include all of God’s people. This is masterfully done in her 34 paintings for the Book of the Gospel lectionary published in 2000 by LTP. Her biblical paintings visually remind us that, “red or yellow, black and white, they are ALL precious in His sight . . . Jesus loves all the children of the world.”

AMBER ELISE
”Creating bright, bold and colourful designs, I bring my ideas to life through screen printing, painting and paper-cut, combining traditional skills with digital techniques. My work takes many forms, including ceramics and textile printing, but I mainly create art prints to adorn your walls. I enjoy an eclectic mix of private commissions, painting large scale murals and producing prints, cards and textiles. You can find a selection of my work in a handful of independent shops around the UK.
I’ve been working creatively since 2010, following my dream and passion to be an artist. I’m self taught, from a non-traditional background and my practice is always evolving. I’m currently focusing on creating original pieces, abstract paintings and paper cut compositions.”

MIKE BRISCOE
”I have always had a strong attraction to coastal seaside images, having lived on the North Wales coast for most of my life it is of no surprise that seaside images have dominated the content of my work. I have often painted scenes from café interiors with the outside visible usually the sea in the distance, I am fascinated with the relationship between the outside and inside and the intangible experience it provides.
The paintings are not an objective report on the natural world. They have heightened intensity of colour and tone – therefore it is a mix of observation and the experience of being in the moment, time spent and experienced.
The locations act as a back drop to distant memories and more recent experiences.”Mike Briscoe RCA These paintings are meticulous in their detail, but are not merely photographically objective. Mike arranges his scenes precisely, heightens the colours and tones, and intensifies the contrast between the light and the shadows. The images become laden with feeling, foreboding and control.”

Get in touch with any queries or image requests.

The annual RA Summer exhibition kicks off at Burlington House next week with a whole host of new...
Read More

“Summertime is always the best of what might be” – Charles Bowden You’ve shed a few layers of...
Read More

“If I had to choose a religion, the sun as the universal giver of life would be my god” Napoleon...
Read More