Looking back at the ‘Memento Mori’ painting tradition, Vanitas is a macabre genre of symbolic still-life that prospered in the Netherlands in the early 17th century reminding the viewer of their mortality.

The word ‘vanitas’ is Latin for vanity, or ’emptiness’, and signifies the meaningless of earthly life. The purpose of Vanitas’ paintings was to caution the viewer to be careful about placing too much importance in the pleasures of this life as they could become an obstacle on the path to salvation.

Origins of the genre

The wealthy middle class of the 17th century Dutch Republic invented capitalism as we know it today. Through their dominance of international trade, they spawned an era of scientific advances and fabulous riches. And, as a by-product of this, they gave us one of the greatest art movements the world has ever seen: the Dutch Golden Age.

Since the northern Netherlands had become Protestant, religious art was replaced by other genres of painting and precious objects and luxury items made their way into still-life paintings. Unprecedented wealth and Calvinist morality seems to have provoked a degree of soul-searching and the Vanitas genre evolved as an acknowledgement of something distasteful about this decadence.

Several of the greatest Dutch still-life painters, including Jan Davidsz de Heem, Willem Claesz Heda and Harmen van Steenwyck were masters of the vanitas still life, and the influence of the genre can be seen in the iconography of artists working today, including Damien Hirst. 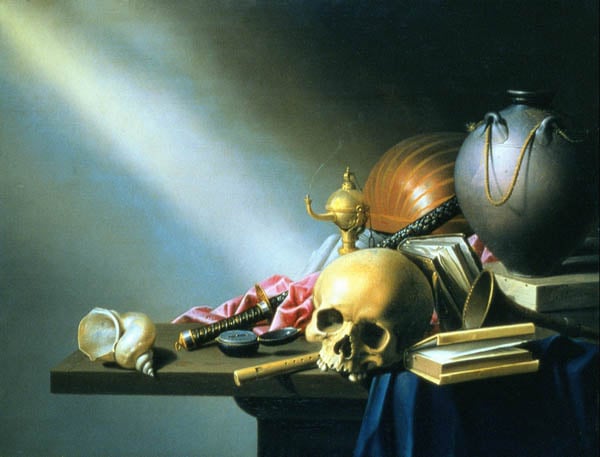 Vanitas paintings were purchased by the rich who possessed a conscience about the wealth they had accumulated. However the genre had an in-built contradiction in the irony that the paintings were also valuable and collectible commodities and, as such, became ‘Vanitas’ objects themselves.

This month we highlight exhibitions in the UK, USA, Sweden, Denmark, the Netherlands, and...
Read More

Have you got a ticket for the upcoming A/W catwalks this September? …Can you get us a seat next...
Read More

This summer Nik Van Es, an illustrator from the Netherlands, was commissioned to design a map...
Read More