The Royal Navy has played a fundamental role in the development of Britain and its empire through history. The National Museum of the Royal Navy tells the Navy’s epic story from its origins in 625 AD to the present day. The museum’s collection splits its narrative of the Royal Navy’s history into seven major
periods bringing to life the story of how the navy developed. The pictures from the collection provide
an invaluable and immersive insight into the Navy’s history and the history of how war changed the
world.

Discover the full collection of the Royal Navy Museum on Bridgeman Images here. 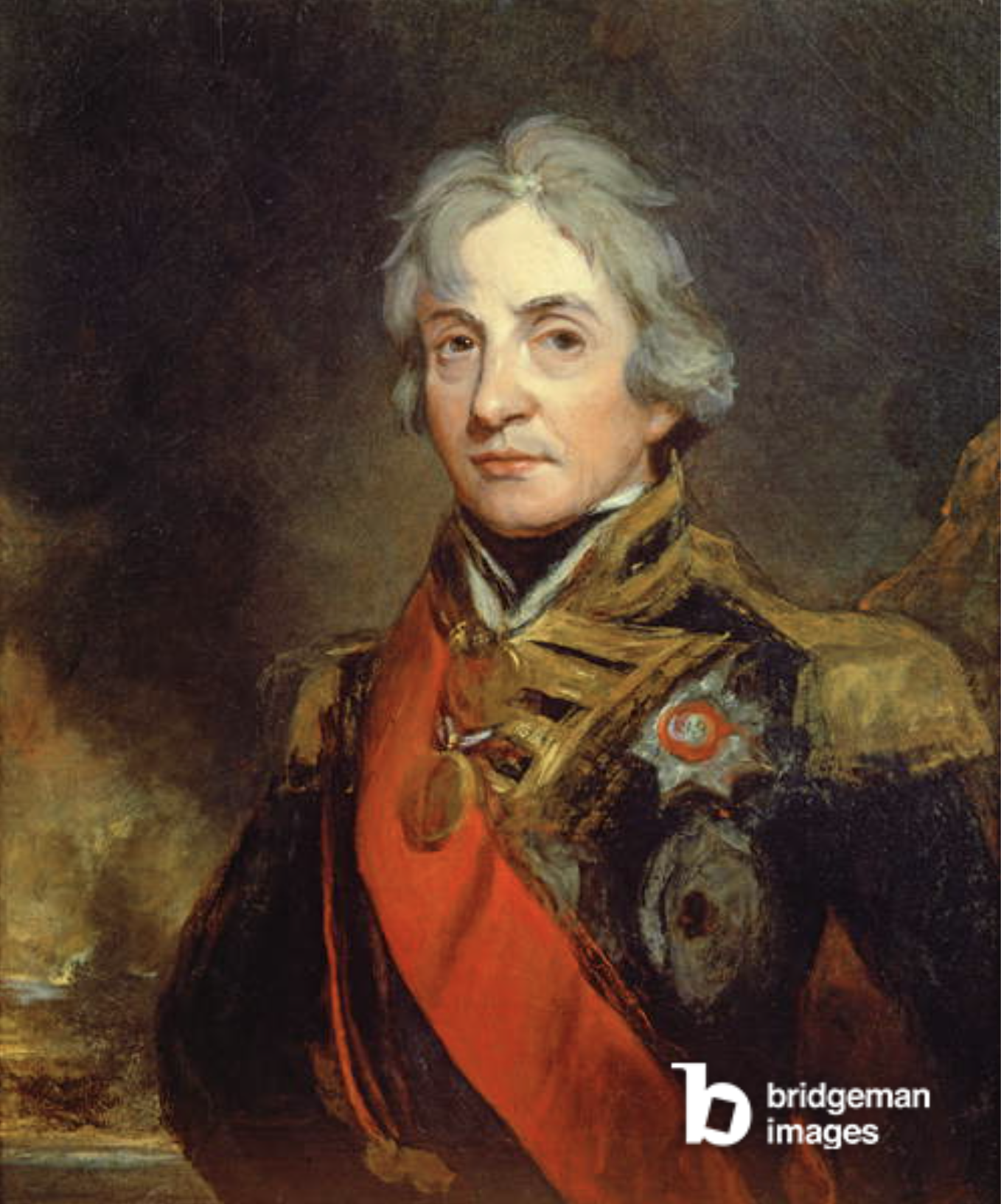 Origins (625-1450)
The collection demonstrates how the sea has shaped the history and making of Britain. This narrative begins with the sea carrying the earlier invaders to British shores, the Anglo-Saxons, the fearsome Vikings, and the Normans. This period saw the early creation of the Navy under King Canute, which was then abolished by Edward the confessor, making Britain vulnerable to Norman invasion in 1066.

During the following years there was little need of a protecting force and ships were used for trade between Normandy and the south coast of England which led to the creation of the first ports. With the loss of Normandy in 1204 there was more interest in a Navy and by 1212 a naval base was established in Portsmouth. The years that followed saw a series of battles with France causing the navy to grow and its number of sailors and boats increase. 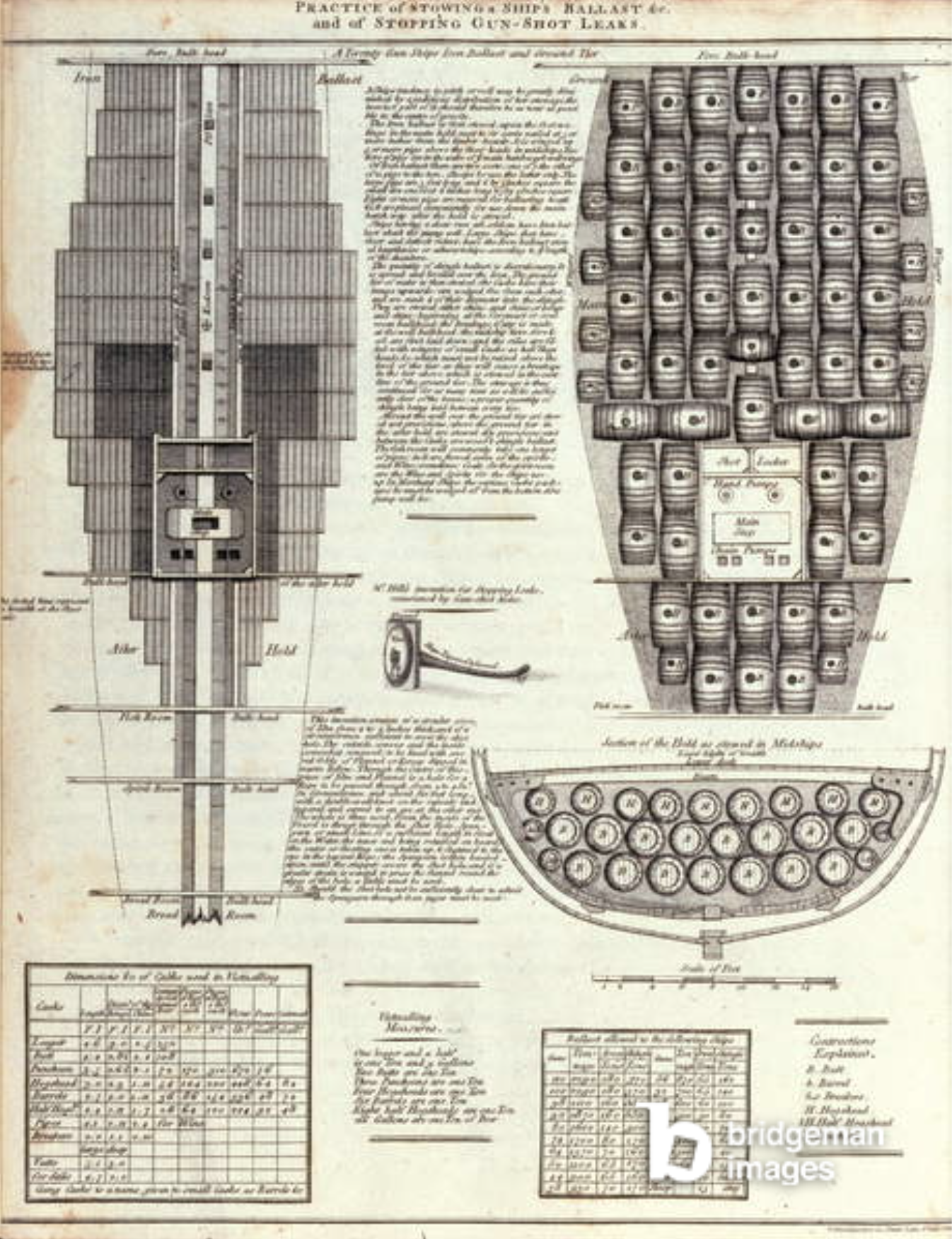 Towards Maturity (1450-1660)
In this period, the small standing naval fleet grew more advanced and structured in terms of both organisation, tactics and strategy. The ships and weapons became more advanced and capable of open
water combat, and Britain was victorious in a series of major battles such as the Spanish Armada.
Paintings from this time are held in the museum’s collection vividly depicting these historic moments
of Britain’s past.

Other paintings and records show the growing importance of the Navy for trade and its role in
maintaining the trans-Atlantic slave trade. The paintings in the collection also show that the Navy was crucial in supporting global expansion and exploration. At this time there were advancements in weaponry and ships developed into floating gun platforms as the guns themselves shifted from being made from bronze to iron, maximising effect, and production efficiency. 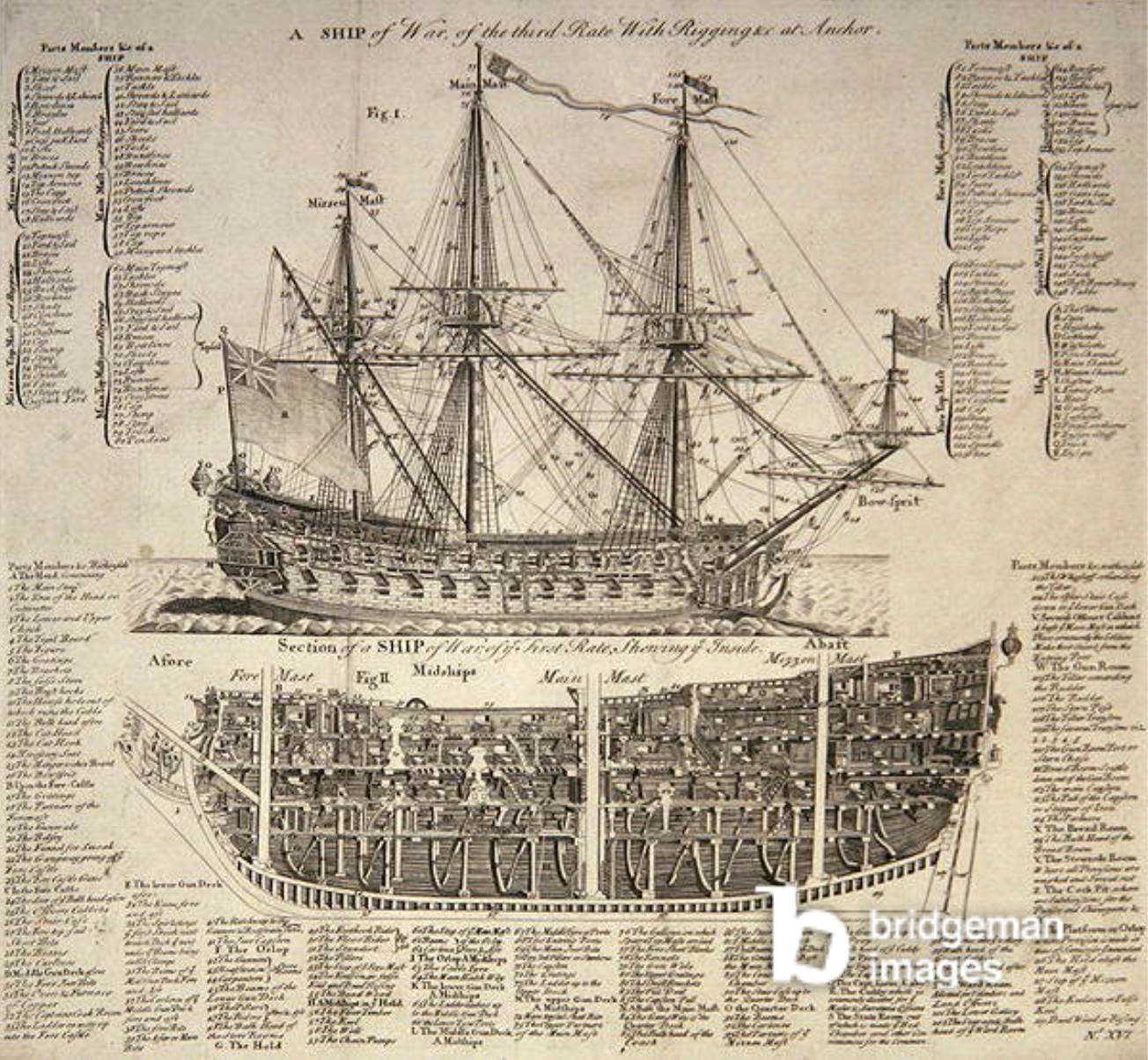 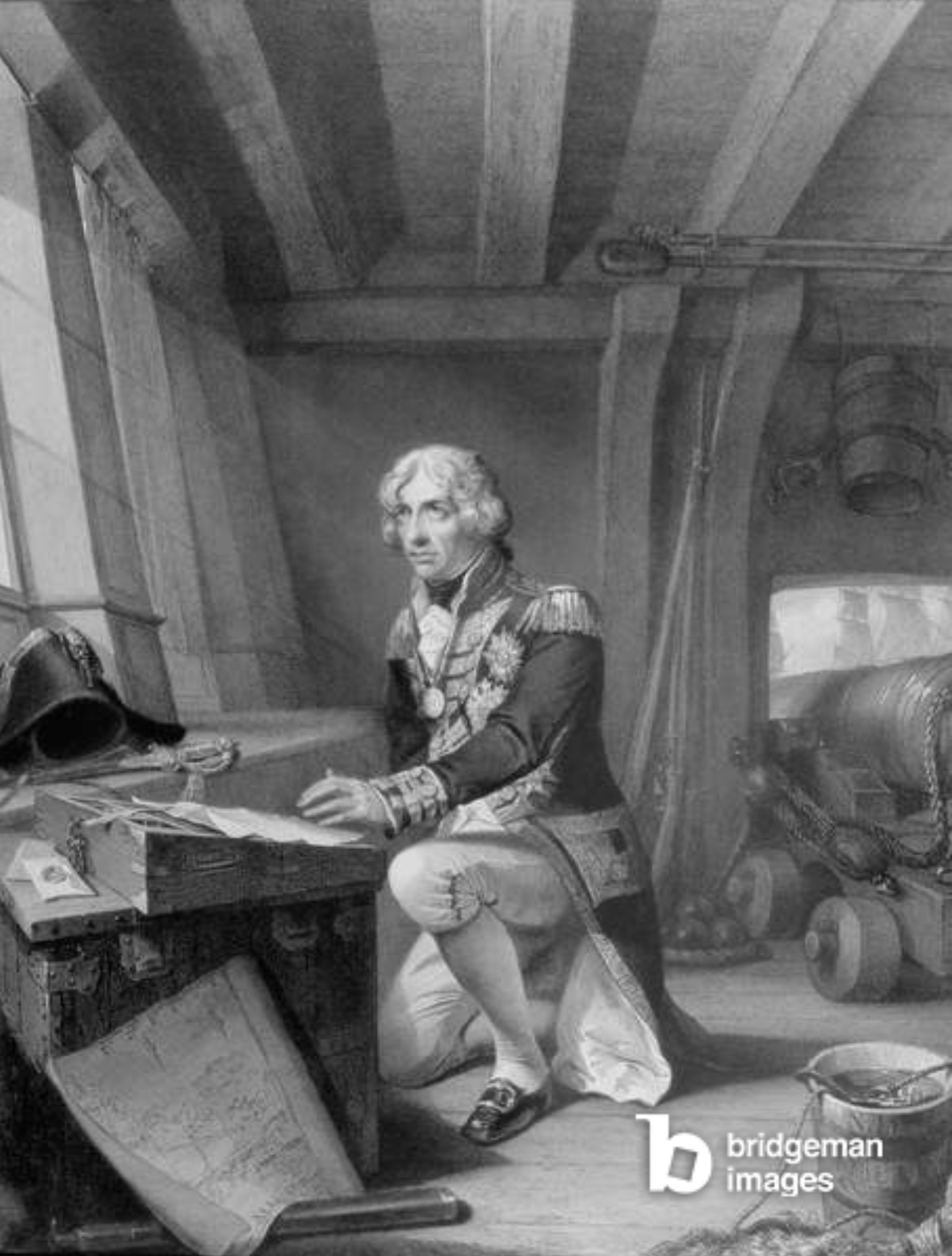 Empire Building (1660-1815)
The collection moves on to cover how Britain’s power increased under Charles II after the restoration of the monarchy leading to the greater infrastructure of the Royal Navy. This period saw the development of the Royal Marines in 1755 and witnessed Britain gain dominance over France and other European powers, having control over America and the major global trade routes. Massive victories including Nelson defeating Napoleon at the battle of Trafalgar meant the Navy and her exploits became more vivid in the national consciousness, represented by the many works in the collection that romanticise figures and ships. 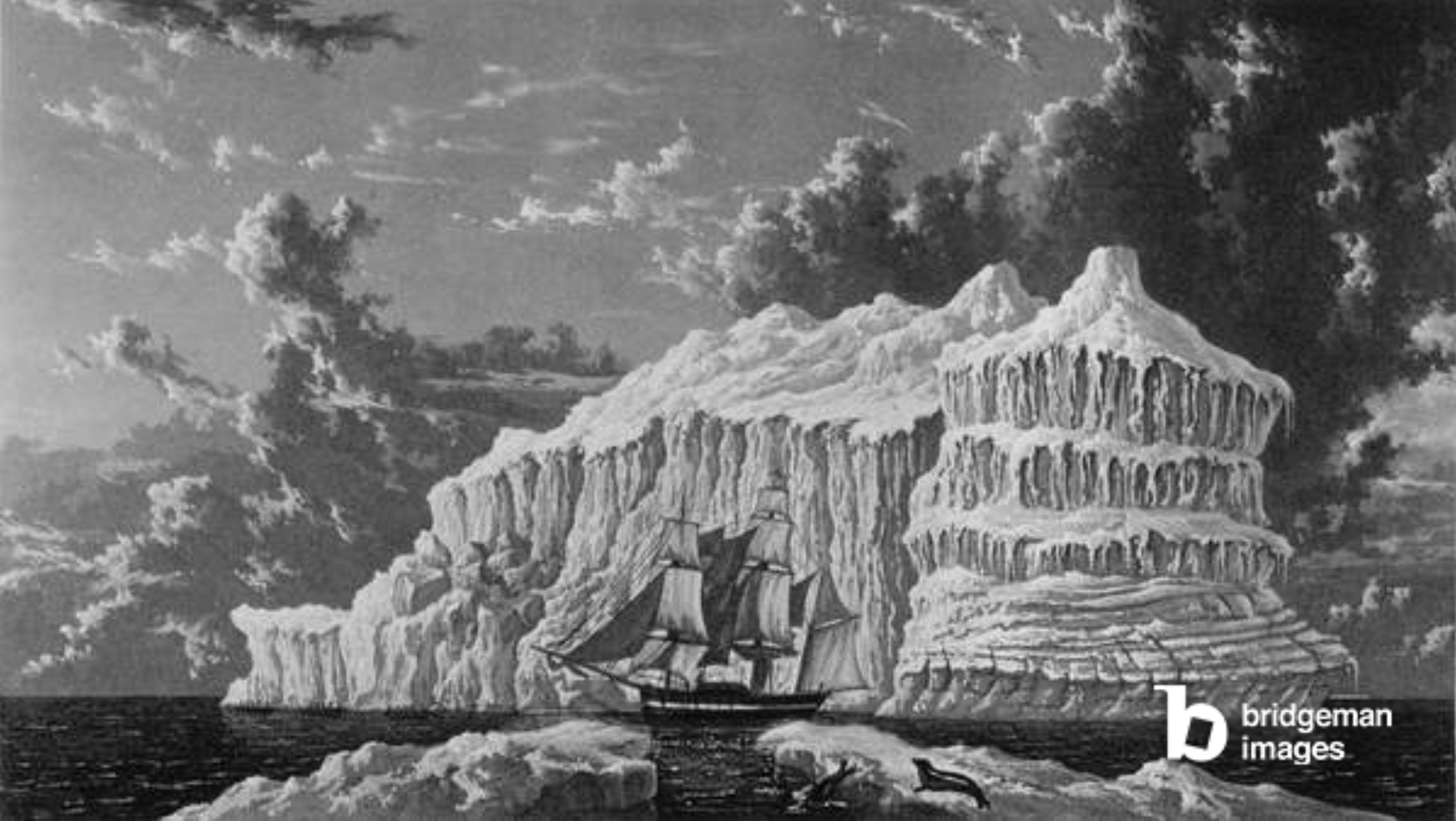 By 1815 Britain and the Royal Navy was virtually unmatched and began to attempt at suppressing the slave trade. The collection shows that exploration was still extensive, with discoveries in both the Arctic and the Pacific. This gained plenty of funding as the search for new lands to colonise continued, which had long term implications - chief among them being economic gain to fuel the rapidly expanding Empire. 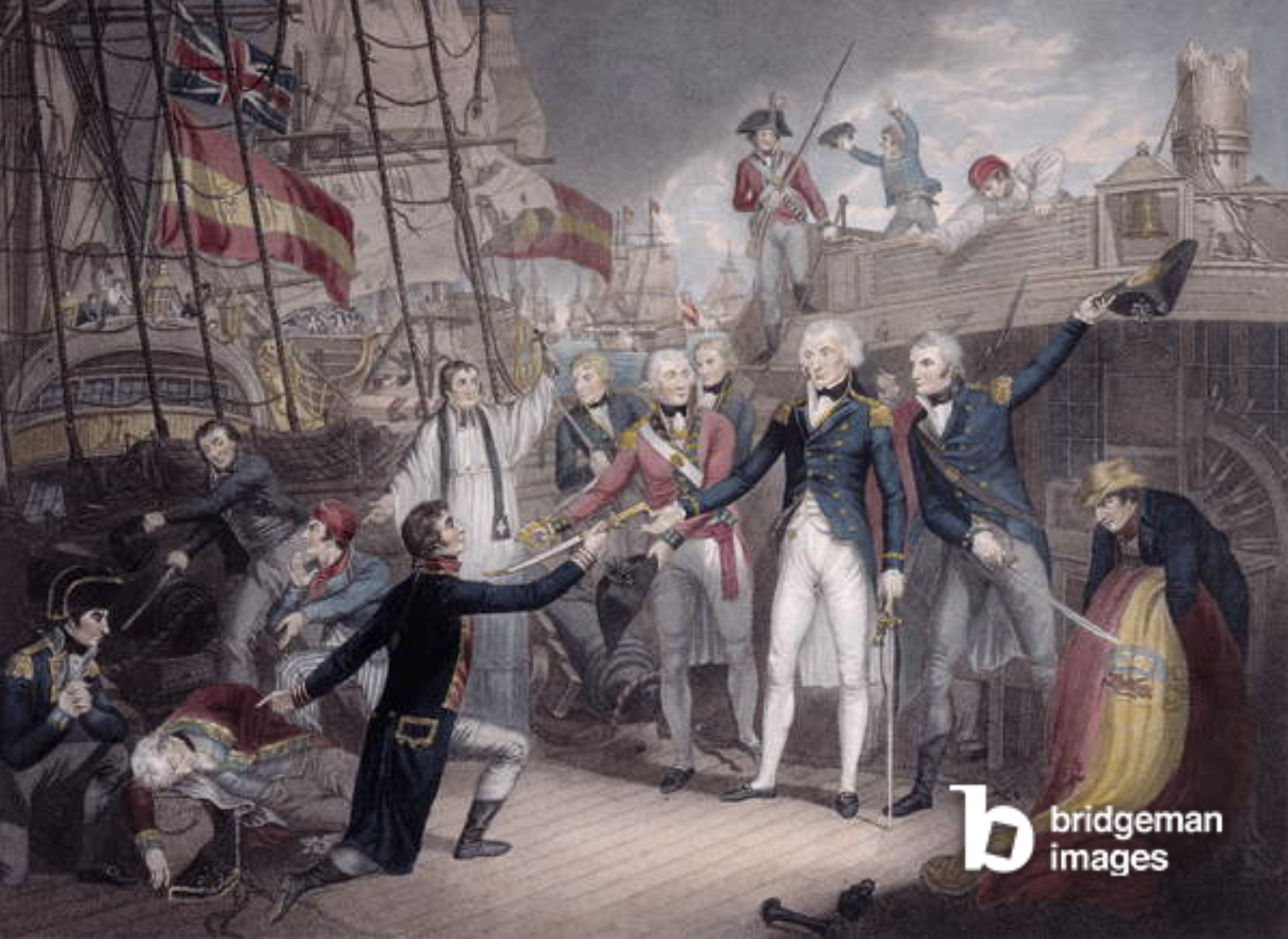 Superpower (1815-1898)
During this period Britain and her Navy have established themselves as the first world superpower due to the dominance of the Royal Navy which held the largest maritime force from 1889, making sure its battleship numbers  were never smaller than the combined strength of the next two biggest navies. In 1807 the slave trade was abolished, and the Navy became an active force in anti-piracy efforts. 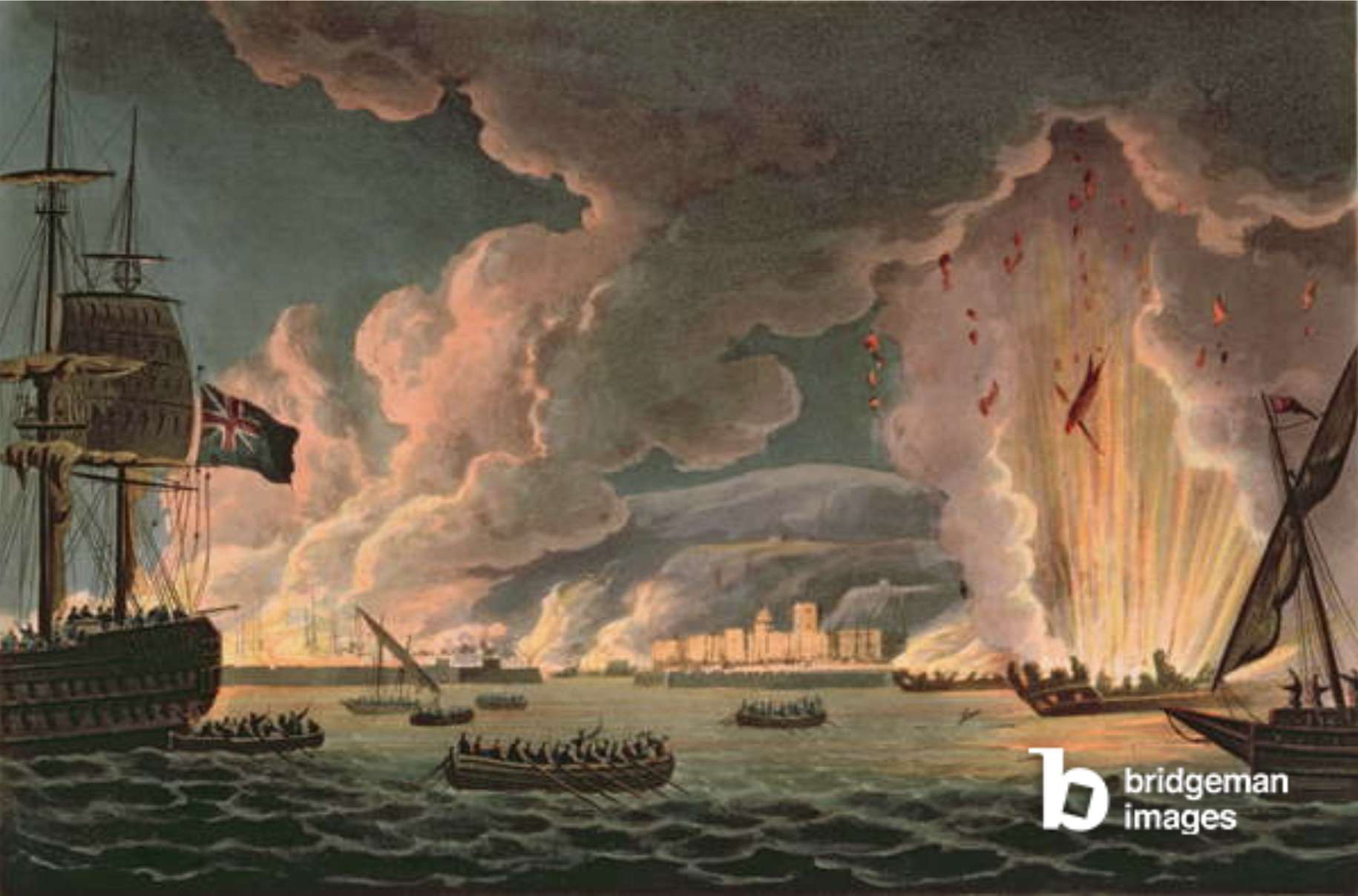 Exploration continued and the edges of maps were filled in. The industrial revolution contributed its part to the development of new ships, which were now steam powered and where possible ships were converted. Weaponry also grew more powerful - and more explosive than ever. At the end of the period the collection demonstrates that the Navy had been transformed into a fully professional unit providing a proper career path for British men. 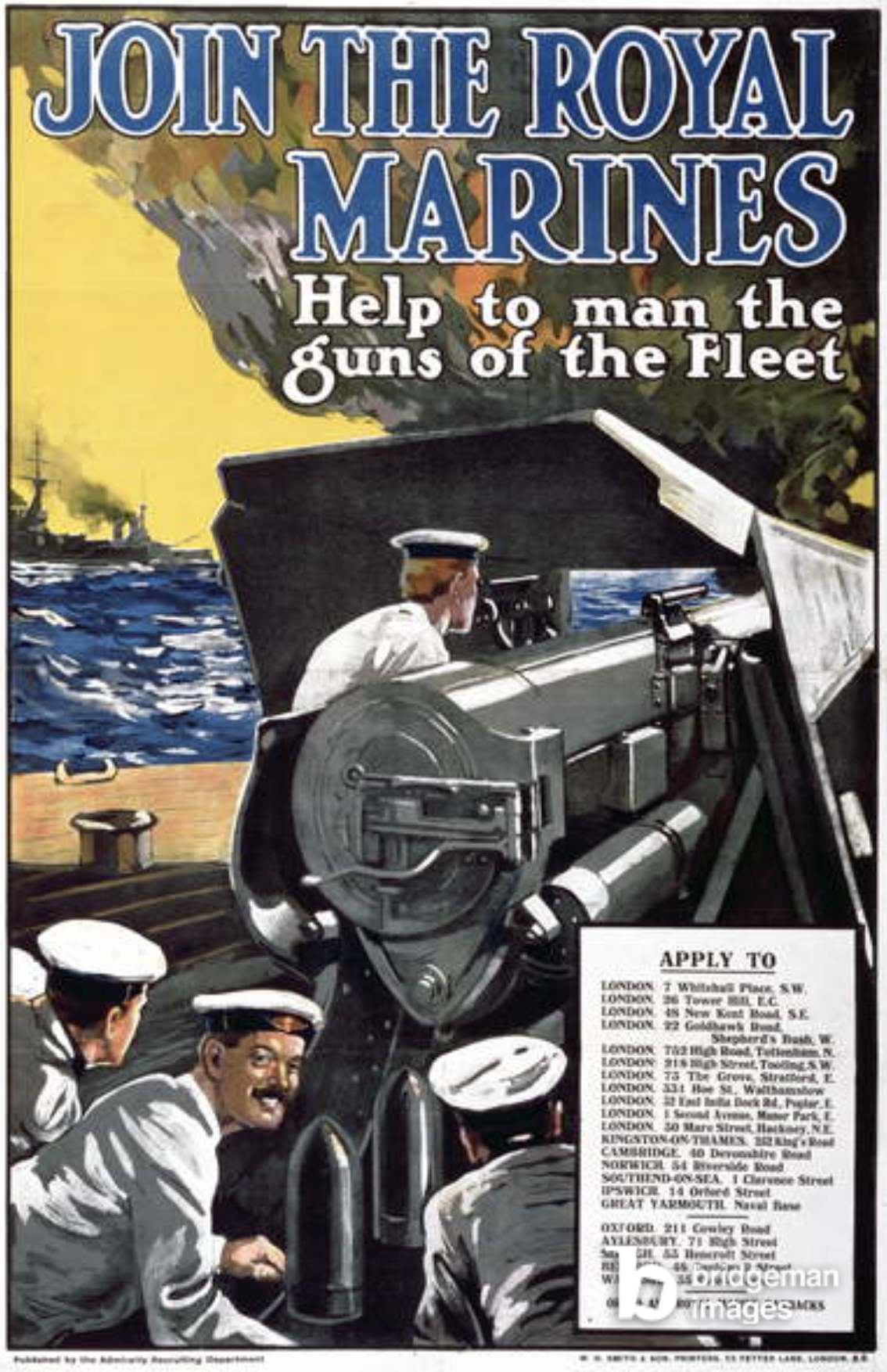 World at War (1898-1945)
As tensions in Europe tightened, resulting in the two World Wars the collection displays how the Navy began to advertise itself to attract more professional sailors and men. The numerous posters held by the collection portray this alongside the propaganda posters made at the time to inspire patriotism and to remind the sailors of the importance of their caution and privacy over Naval matters in case the enemy caught wind of information. 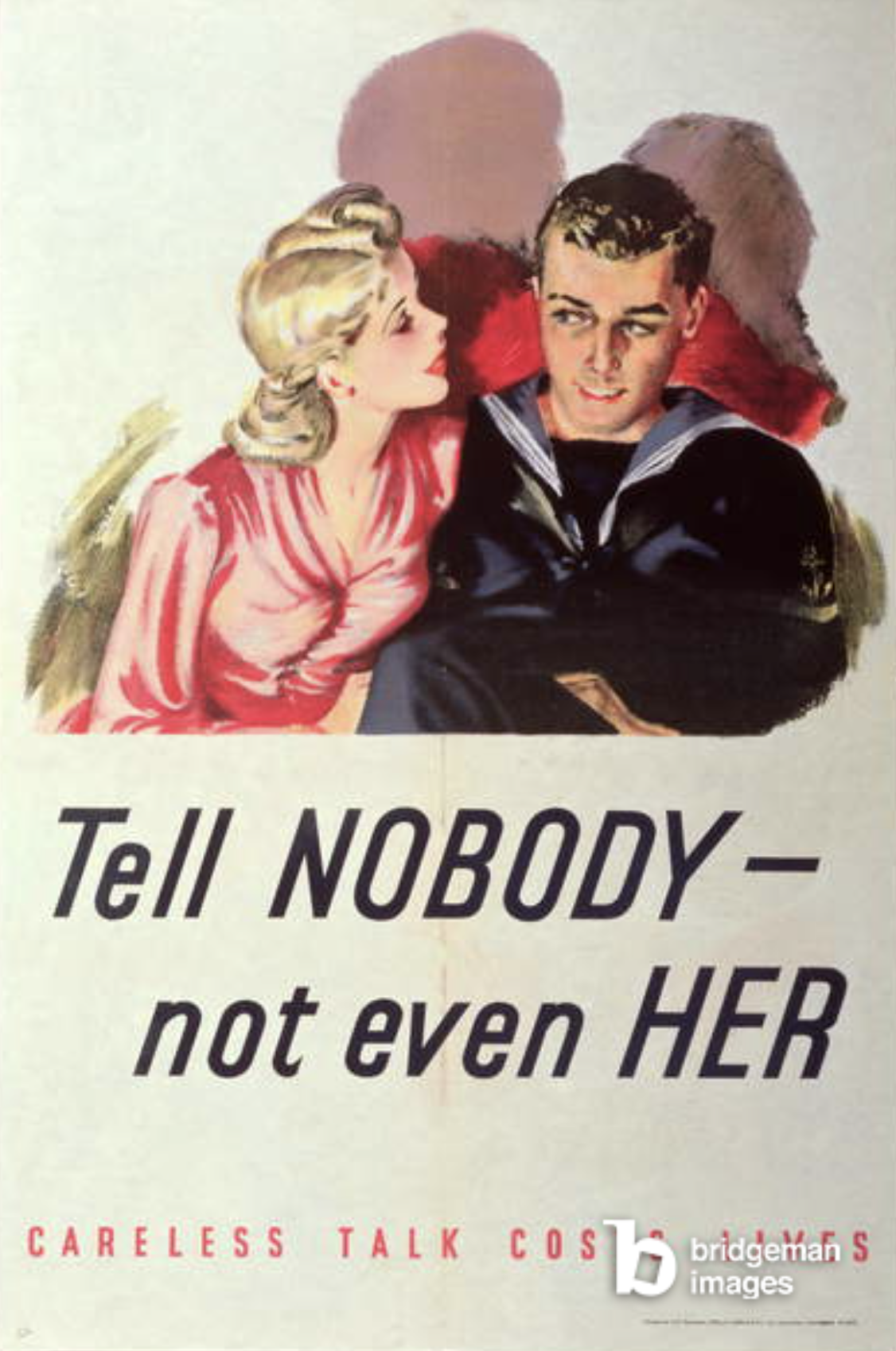 The collection also shows how the navy modernised due to the efforts of figures such as Churchill, who saw the need and importance for the Navy to develop aircraft capabilities. During the second world war aircraft carriers became crucial in the fight for the seas and sky. Specifically, the strength of Britain's Naval and Air force was not underestimated by the Nazis and was recognised and understood as a valid threat. After both WW1 and WW2 the Empire decreased and so did the Navy as a result. 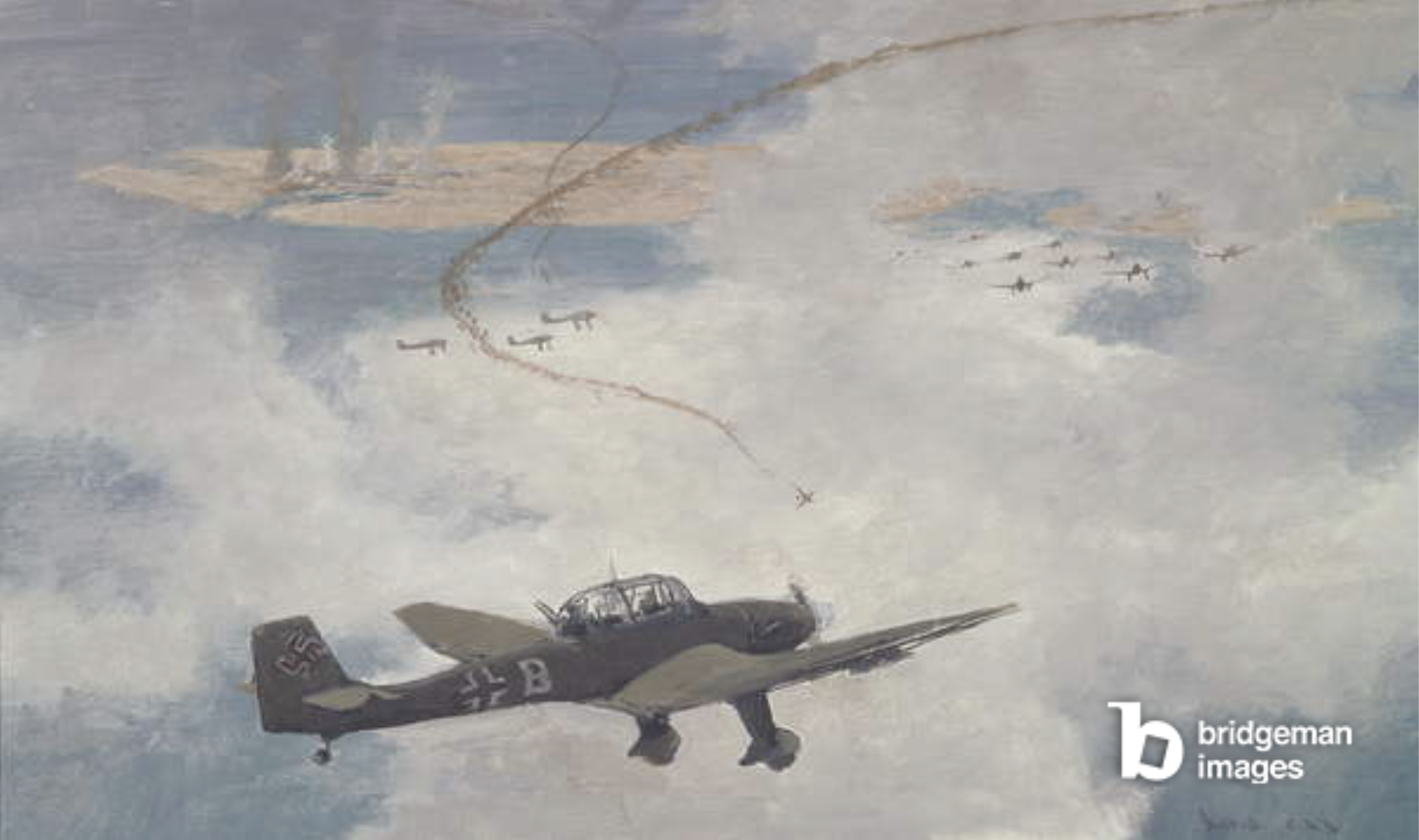 Cold War (1945-1989)
By this time Britain had diminished as a superpower and relinquished dominance of the oceans to the United States. The operations of the Royal Navy became focused on efforts to manage terrorism and help in the Cold War. With the threat of nuclear war, submarines that carried nuclear weapons meant that the Navy became the guardian of Britain’s nuclear deterrent and anti-sub operation. It had, for the most part, fully lost its commercial significance. The Navy continued to decrease as numbers fell from the end of WW2 from 800,000 to less than 65,000 by the end of the 80s and navigating became more advanced with the ability to use satellite systems. 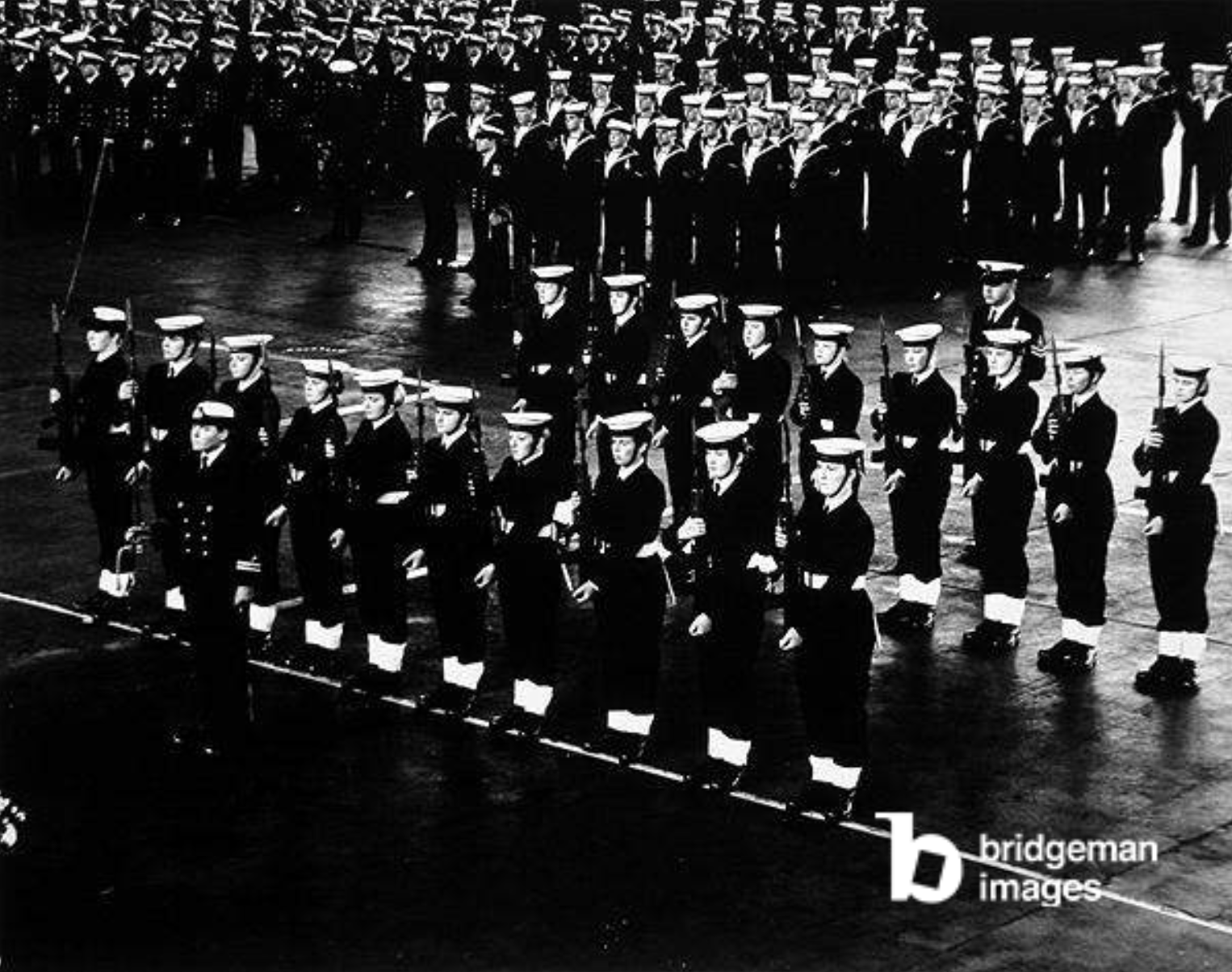 Changed World (1990-present)
By the end of the Cold war the Navy’s role had changed to ‘embrace multinational operations and humanitarian imperatives’, crucially assisting in numerous conflicts such as Bosnia and Afghanistan.
The role of the Navy became more unseen, with battles being mostly fought inland. The pictures in the collection show the Navy’s change in the 90s to allow women to serve alongside men, and the change in the way warfare looks and has once again continued to modernise. 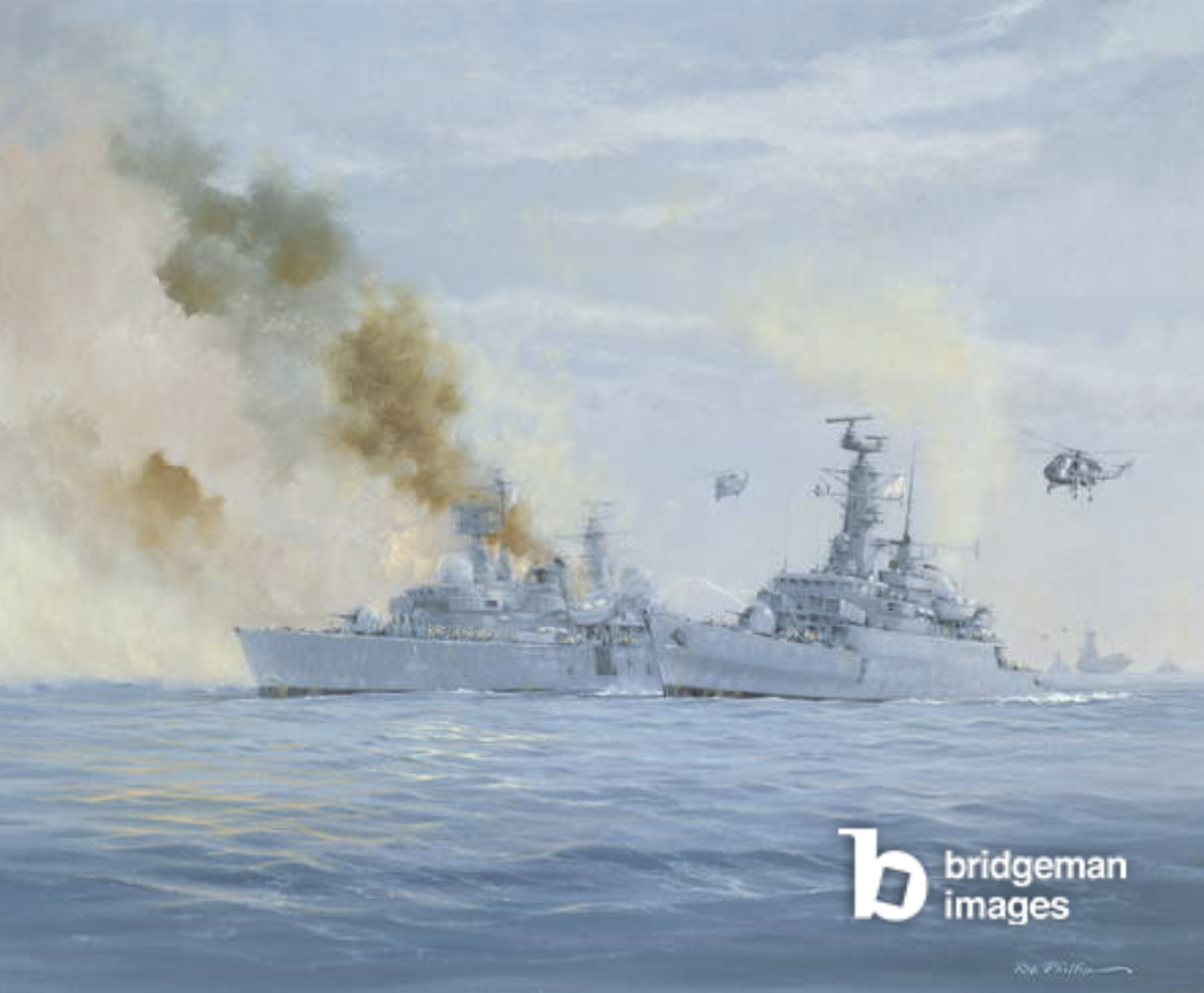 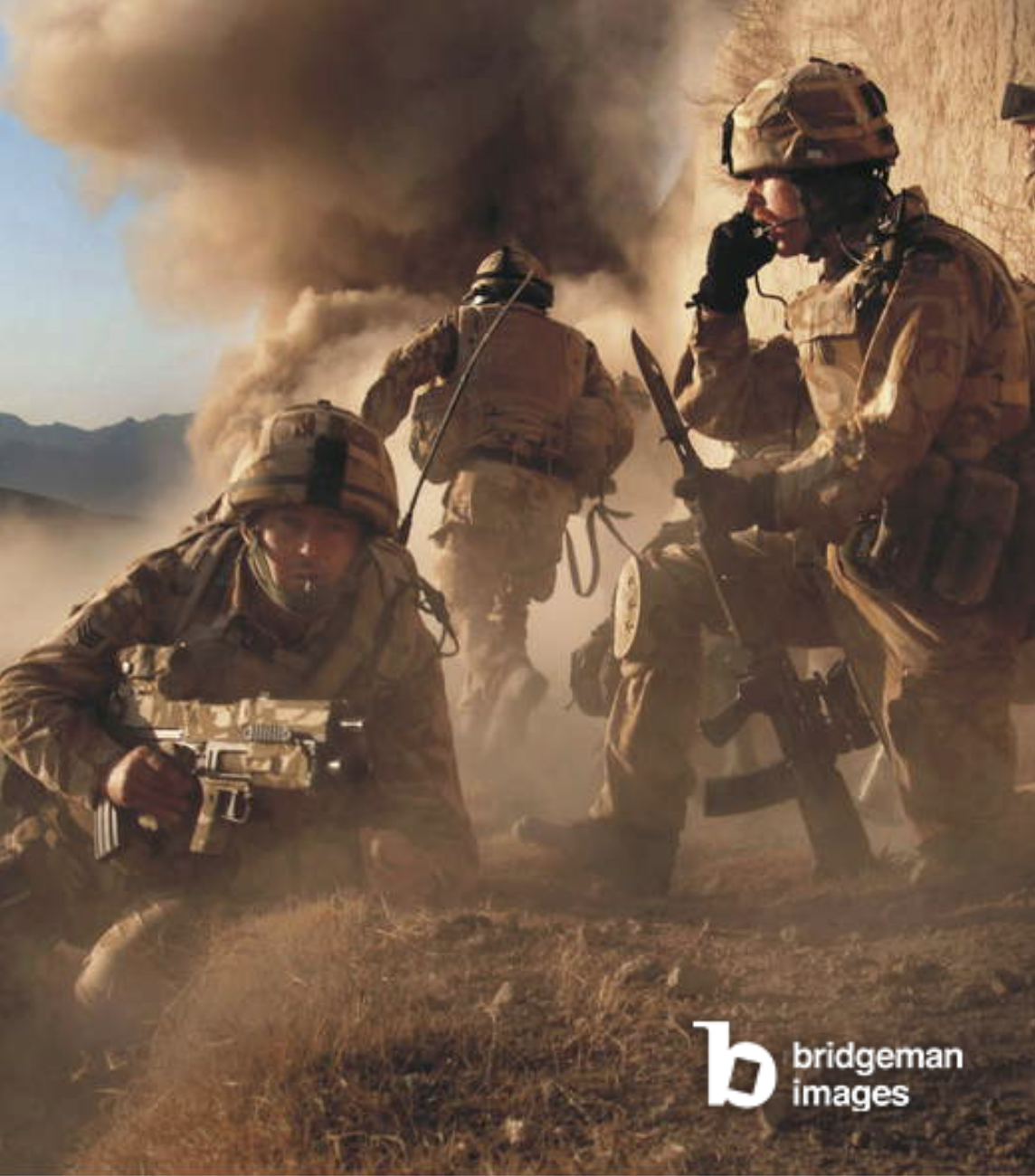 Discover the full collection of the Royal Navy Museum on Bridgeman Images here.

Bridgeman Images are proud to represent The Royal Collection, one of the largest and most important...
Read More

The Royal Collection is the art collection of the British Royal Family and one of the largest and...
Read More

Over the years the British Royal Family have embraced dogs – most notably corgis – as their...
Read More