Representing the ravaged landscapes and soldiers who would never return, we bring you images by acclaimed artists, vividly chronicling their first-hand experiences of World War One.

Official war artists were a select group, contracted to produce images of the war. Their role was to sketch, draw and paint as many aspects of the war and their experience as possible.

Among the most famous of these artists were Paul Nash, his younger brother John, Eric Kennington and Christopher Nevinson and Stanley Spencer, both Bridgeman copyrighted artists, whose dramatic paintings capture the dehumanising horror of this brutal conflict. Even after 100 years, age has not wearied the power of these images. 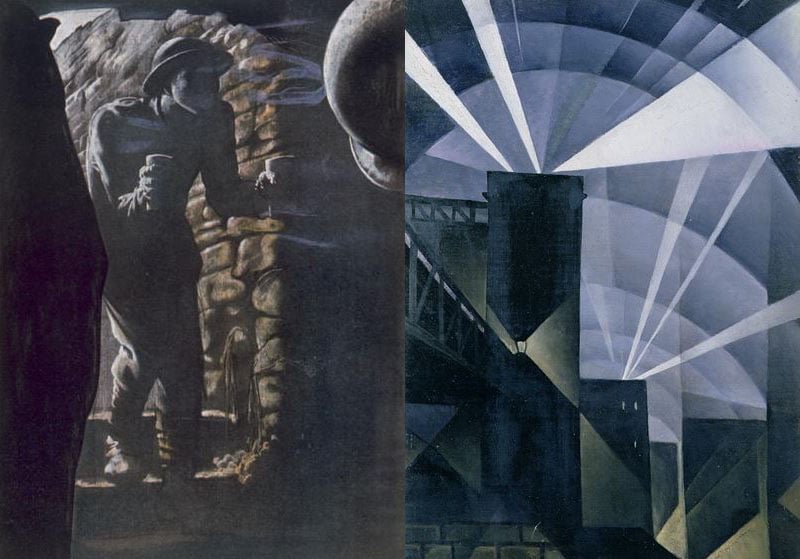 World War I in French and German Art

Photography, both in black and white and in colour, was one of the most popular mediums used by the French to capture the horrors of the First World War. Nevertheless, French born painter Georges Leroux drew inspiration from his time serving in the French army and looks back on his memories with his work “L’Enfer” – a vision of hell.

A view from those fighting for the Central Powers can be seen in German war volunteer Otto Dix‘s depictions of World War I, which were also painted long after it was over. His images leave us in no danger of forgetting the brutality of this most tragic of wars.

In 1914 Otto Dix was a fierce German patriot but his experiences changed him into an anti-war artist. Like Dix, the expressionist painter Ernst Ludwig Kirchner joined up at the start of the war, but his mental health soon collapsed. In his 1915 painting “Self-Portrait of a Soldier“, he gives visual form to shell shock. During World War I, a radical minority of Germans turned to artistic and political revolution, rather than nationalism. Like the British war poets, Germany’s young artists came to hate the war, but unlike the poets, they organised to resist it.

Collections represented by Bridgeman for licensing include the National Army Museum, the Imperial War Museum, and Peter Newark Military Pictures.

Celebrating 100 Years since the Birth of Bauhaus – bridgeman blog

The year 2019 marks the 100th anniversary of the Bauhaus, a revolutionary art school started by...
Read More

This International Women's Month, we're taking a look at the pioneering female artists throughout...
Read More