Everything you need to know about Molière

Jean-Baptiste Poquelin, most commonly known for his stage name, Molière, was a prominent French playwright from the 17th century, and today, named the first greatest French comedy writer in history. His plays, “L’École des Femmes”, “Le Tartuffe ou L’Imposteur” or “Le Misanthrope ou L’Atrabilaire Amoureux” have been continuously reproduced at contemporary theaters as well as translated into many different languages.

Molière revolutionized the theater scene in France by creating dramatic, funny and extravagant plays, which opened a new doorway for the future of French theater. However, his charismatic and driven character, eased him into taking chances and having the opportunity to do what he did best: animating serious, and sometimes absurd, topics that surround us everyday. 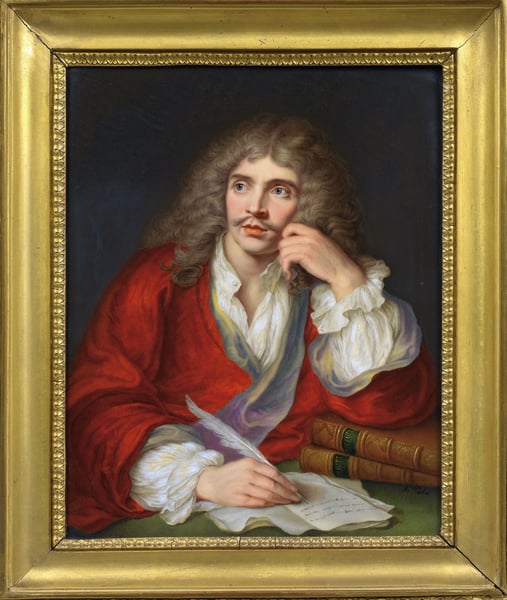 Molière first began following his father’s footsteps, and became a furnisher of the royal household, but he shortly realized his love for theater and acting, and went into creating a theater company with his friend, Madeleine Bejart. Theater at the time wasn't very popular in Paris and the city already had three established theaters, thus starting one from the ground up was difficult for Molière and Bejart. However, instead of drowning in debt and having to close down the theater, Molière and Bejart decided to tour France and put on plays in different cities to help pay for the theater back in Paris. Molière’s determination and personality played an important role during their tour, and after ten years, he came back to Paris a new person with fresh ideas and perspectives about the world.

One of Molière’s biggest influences was Commedia dell’Arte, the Italian theater tradition of the 17th century. When he was back in Paris, he shared the stage with an italian theater group for several years, where got the opportunity to view and study the italian ways of acting with very close proximity. Molière was inspired by and passionate about the dramatic and exaggerated characteristics of italian theater, which he later adopted into his own plays and acting. For most of his life, Molière suffered a condition that caused him to start coughing uncontrollably and unexpectedly. Whenever he had one of his cough attacks in the middle of a play, he used the opportunity to exaggerate it even more, humoring his conduction and causing the audience to laugh. This is just one example of how Molière knew how to perfectly turn a serious or embarrassing situation into a comedic and humoristic scene for people to enjoy. Apart from Commedia dell’Arte, Molière was also inspired by the ancient traditions of theater, that of the Greeks and the Romans. He believed that ancient traditions were the foundation of theater, and therefore, the playwright's job, to honor their value and adapt them to fit contemporary times. 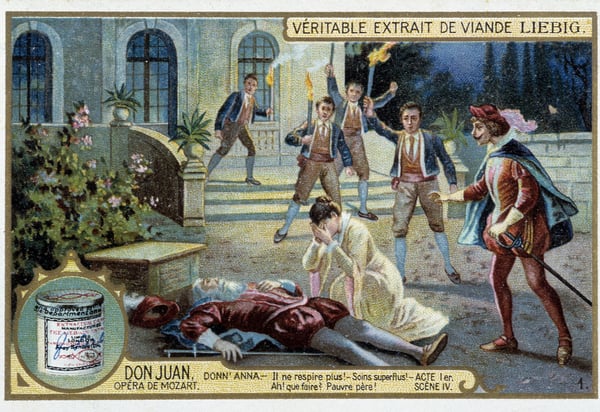 Molière’s path to fame, however, didn’t really begin until October 24th, 1685, when he and some of his colleagues, acted out Nicomede by Pierre Corneille, in an improvised stage in front of Louis XIV and his brother, Philippe Duc D’Orleans. Philippe Duc D’Orleans loved their performance and from that point forward, always invited Moliere and his theater group to perform in front of important audiences. 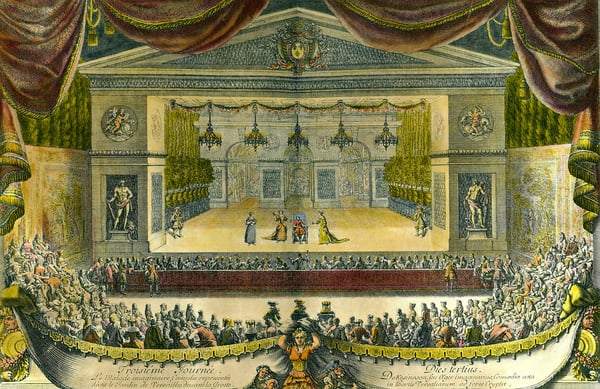 Louix XIV, became skeptical of Molière’s adaptations of self-promotion, and appointed Jean-Baptiste Lully, who later became one of Molière’s closest friends, as the supervisor in charge of reviewing all of Molière’s productions. As time passed, however, Molière gained the trust of Louis XIV, and worked closely with him. Their close relationship caused a lot of envy among other theater groups and among members of the royal court, since many claimed Louis XIV favored Molière in many aspects. Nevertheless, Moliere had a strong character and strongly believed in his work, which only made people’s envy towards him make him work harder.

In 1662, he presented one of his most famous plays, “L’École des Femmes” in front of the king. The play is about a man who chooses a child for his wife, but whom he later raises to be completely ignorant about the world. Molière’s enemies, mostly those in the royal court, went on to claim that this play was not only highly immoral, but stolen from another playwright. Instead of immediately retrieving the play, to not further destroy his reputation, Molière wrote a play called “Critique de l’École des Femmes”, which talked about the absurd disputes people had over his original play in a form of comedy. It was responses like this, that made Molière stand out among other playwrights at the time, and what made him the prominent writer that he is honored to be to this day. 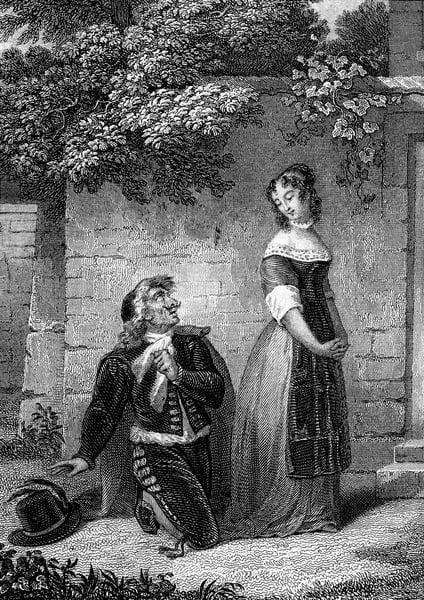 Towards the end of his life, Molière put together an edition with his most famous plays, for his legacy to be remembered after he passed. The edition didn’t become available until ten years after his death, but it remained one of the most important historical theater records in history. 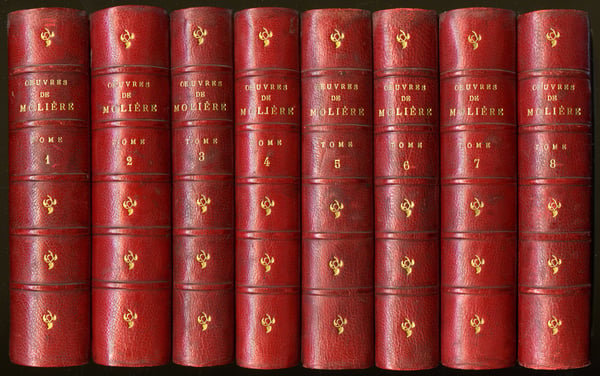 Molière understood his mark in the theater world, and thought highly enough of himself to want to be remembered for generations to come. Other artists, especially visual artists, from the time understood Molière’s importance too. Artists such as Jean Baptiste Mauzaisse or Charles Le Brun painted portraits of Molière in traditional as well as extravagant poses, and with theater clothing to commemorate his legacy. 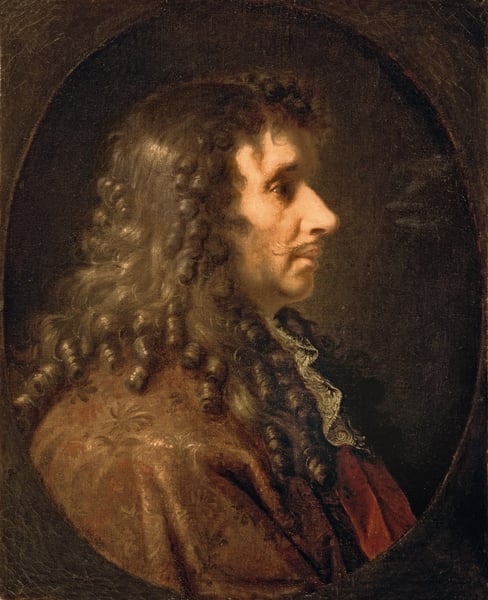 Nowadays, his legacy is remembered through visual art, but also through contemporary theater. There’s a reason why the french language is now referred to as “the language of Molière”. His plays set a precedent for French culture and theater that influenced the following generations and today, the contemporary theater scene. 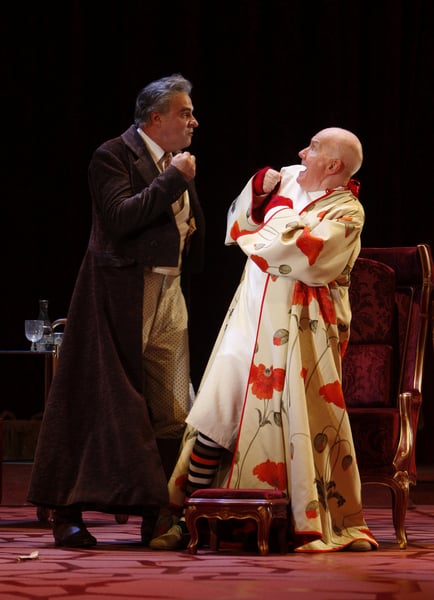 Theater in France, before Molière, was more serious and traditional, comedy and satire had to be done subtly in order to be accepted by the audience. However, Molière completely disregarded that, and revolutionized theater to become a space where realism was portrayed through comedy, dance and music. If it hadn’t been for Molière’s bravery, maybe contemporary theater today would still be that serious space that it once was. Historical characters like Molière remind us that one has to be brave and fierce in order to change traditions and customs, as well as be sure of oneself that the work one is doing is going to go down in history. 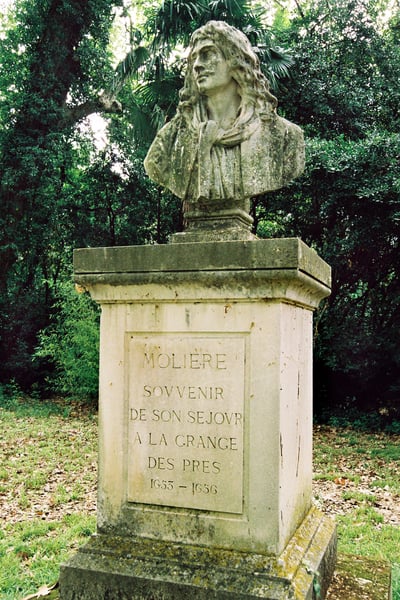 Discover more images of Molière in the Bridgeman Collection

Tags: Molière
Back to Blog

We all know French cuisine is the best – bridgeman blog

I come from Lyon, the French capital of former France (Gaulles), of the French Resistance, of...
Read More

Molière - 400th Anniversary of his birth