Observed annually each February in the US (and October in the UK), Black History Month remembers the pivotal events and pioneering individuals in the history of the world’s African diaspora. Our historical footage archive documents African-American civil rights campaigns, as well as communities and artists from throughout the 20th century.

In the UK, LGBT+ History Month falls in February. Over 50 years ago, clashes between police and protesters outside a gay bar in New York City’s Greenwich Village galvanised a generation, inspiring Pride parades around the world. Thankfully, in many parts of the world Gay marriage is now legal, though while things have come a long way there is still a way to go to achieve true equality for all people, regardless of race, identity, or background.

We're delving into the archive to spotlight significant historical figures, events and artists related to these minority groups and their associated cultures. 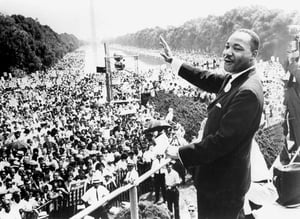 The 1960s proved to be a decade of great social change for African Americans, largely due to the impact of Luther King Jr and his belief in nonviolent civil disobedience.

In 1963, Luther King helped organise one of the largest political rallies for human rights in United States history: the March on Washington. Peacefully calling for civil and economic rights for African Americans, it took place in Washington, D.C. on Tuesday August 27, 1963. The next day, Martin Luther King, standing in front of the Lincoln Memorial, delivered his historic “I Have a Dream” speech in which he called for an end to racism. The march is credited with helping to pass the Civil Rights Act of 1964 and motivating the Selma to Montgomery marches.

On March 7th 1965, state troopers violently attacked peaceful demonstrators led by Luther King, as they tried to cross the Pettus Bridge in Selma, Alabama. 50 marchers were hospitalised on what became known as ‘Bloody Sunday,’ after police used tear gas, whips, and clubs to force them back. After two failed attempts, and protected by 2,000 members of the US Army, protesters successfully reached Montgomery. The achievement is considered the peak of the American civil rights movement and the catalyst for pushing through the Voting Rights Act five months later.

Osinachi is a self-taught digital artist whose work explores personal experiences within a technological environment. Osinachi, who grew up in Aba, Nigeria, produces drawings using Microsoft Word, where he utilises the basic limited design palette of the word processing software to create narrative illustrations. Thematically, his works demonstrate his views on traditional and reversed gender roles, cultural stereotypes, politcal satire and commentary, and can be starkly bold in their imagery. In 2018, he became the first-ever Nigerian artist to showcase artworks at the Ethereal Summit, a conference in New York that seeks to bridge the gap between technology and art through blockchain. 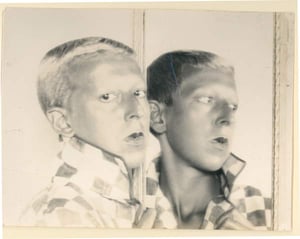 Gender has been a popular topic in the art world recently, with many contemporary artists challenging the the socially constructed binary between feminine and masculine. Claude Cahun, born Lucy Renee Mathilde Schwob was a Jewish-French photographer, sculptor and writer. She changed her name to the gender neutral Claude Cahun in 1917. Cahun’s work mainly comprises self-portraits which have a surreal and self-exploratory quality. It is suspected that one of her frequent collaborators, Marcel Moore, assisted her behind the camera for these shoots. Her questioning of gender roles was revolutionary and perhaps too ahead of her time. Her work only received recognition 40 years after her death, and has gone on to influence contemporary photographers such as Gillian Wearing, Cindy Sherman, Nan Goldin and Del LaGrace Volcano.

Ringgold was born in 1930 in Harlem, New York. From the 1970’s Ringgold left traditional painting, to develop a new style using unstretched canvas and elaborate fabric borders. These grew to become her famous quilt-sized paintings which she made with her mother. The collaborative nature of the quilts emphasise the importance of family, roots, and artistic collaboration, whilst the act of quilt-making, traditionally a female and domestic pursuit, rejects the distinctions between fine art and craft. In late 60s, Ringgold demonstrated against the exclusion of black and female artists by New York’s Whitney Museum of American Art and the Museum of Modern Art and in 1971 co-founded Where We At, a group for African-American female artists. Today, she is a renowned author, artist, teacher and activist.

A leading figure in the Pop Art movement, Andy Warhol did not feature themes concerning diversity and sexuality in all of his work, but his homosexuality did shape his approach to the art world and to his own art career. The first works that Warhol submitted to a fine art gallery - drawings of male nudes - were rejected for being too openly gay. He famously focused on drag in his Ladies and Gentlemen (1975) series and his Self-Portrait In Drag (1982) polaroid photos. He lived as an openly gay man, attending parties with male partners. Drag can also be considered an art form in its own right, with carefully thought out performances and wildly creative hair and make-up. In the 21st century, drag’s focus on self-expression and exaggerated femininity are some of the elements that currently make it more popular than ever before. 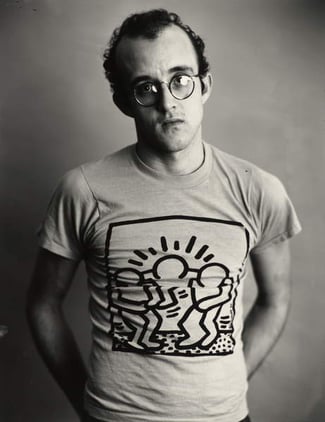 With his ear to the ground of New York street culture, Keith Haring’s work references graffiti, pop art and club culture – especially hip-hop. He also made his images visible in support of political crusades against homophobia, racism and political dictatorships. His art also responded to important issues affecting the streets of New York, such as drug addiction and AIDS, through monumental decorative paintings as well as more clearly politically motivated posters. The zeitgeist of 1980s New York is felt through Keith's work, which is often copied and regularly referenced in street art today. Tragically, Haring died in February 1990 of AIDS-related complications. 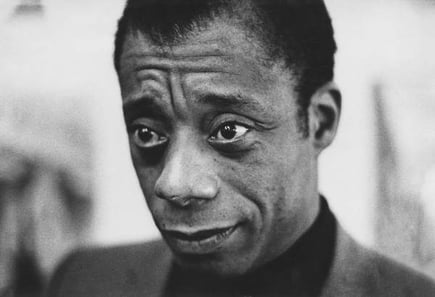 James Baldwin was a successful American novelist and playwright. Baldwin’s fictional novels and plays explore fundamental personal questions and dilemmas arising from the emotional and sociological pressure that hinder the integration of minority/marginalised people, such as African Americans or gay and bisexual men. In his novel he also depicts their internalised obstacles for their quests for acceptance in mainstream society. James Baldwin was himself gay man, and engaged in civil rights activism in America. 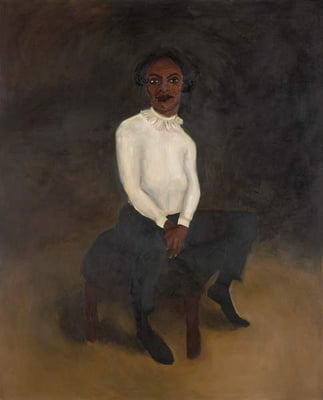 Lynette Yiadom-Boakye is a London based artist who is considered to be one of the most influential painters of her generation, and one of the most successful Black-British artists today. Her work is best known for her portraiture of fictitious subjects, which she creates by combining elements of various real-life people she has seen. Her compositions often allude to canonical European portraiture, but her form and technique are contemporary. She often explores issues of identity and representation and her work is credited with reigniting the subject of the black figure. Next year, the Tate will hold the first major exhibition of her work, bringing together over 80 of her paintings for the first time. 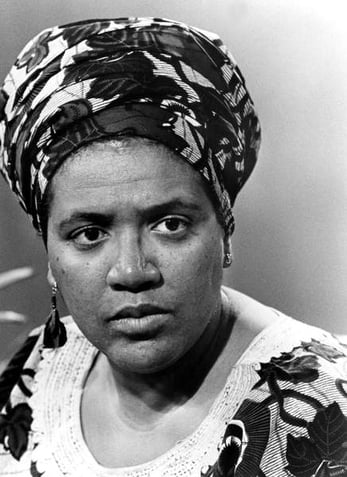 Audre Lorde was one of the most significant feminist thinkers of the 20th century. Lorde, born in New York City to Caribbean immigrant parents was a self described 'black, lesbian, mother, warrior, poet'. who approached the women's liberation movement with a different perspective to that of her straight, white, middle-class peers. Her unique perspective and writings were hugely influential in shaping ideas about intersectional feminism.

In her teens, Lorde had felt others had suspected she was 'queer', but wasn't sure herself of her sexuality until she was 20. She married a man, lawyer Edwin Rollins and had two children before a divorce preceding several relationships with women. 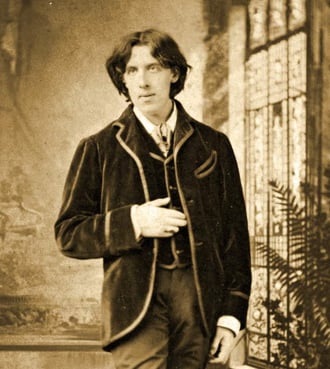 Oscar Wilde, the Irish playwright, poet and raconteur went from being a hero as the most popular playwright in London in the 1890s to zero after his relationship with another man was revealed. He was famously tried in court in 1895 for “gross indecency” and sentenced to a 2-year jail term which severely impacted both his health and his career. After his release in 1897, he suffered premature death at the age of only 46.

One of Britain’s most influential mathematicians and computer scientists has a tragic past and is one of many cases of LGBT struggle in the United Kingdom. Born in London, Turing studied at King’s College, Cambridge. Throughout the Second World War Turing he worked for the Government Code and Cypher School at Bletchley Park. Known to colleagues as ‘Prof’, Turing was central to the breaking of the German naval cipher, the Enigma. After the war he joined the National Physical Laboratory where he led work to develop a large-scale electronic digital computer. In March 1952, Turing was brought to trial for having a sexual relationship with a man in spite of his previous work in aid of the country. His position as a government consultant was ended, and on 8th June 1954 Turing was found dead, the inquest ruled suicide by cyanide. This year, Turing is receiving recognition by becoming the face of the new £50 note.

Observed annually in the US (in February) and the UK (in October), Black History Month remembers...
Read More

Feeling stabbed in the back by politics? Villain or revolutionary, some of history’s most...
Read More

This International Women's Month, we're taking a look at the pioneering female artists throughout...
Read More