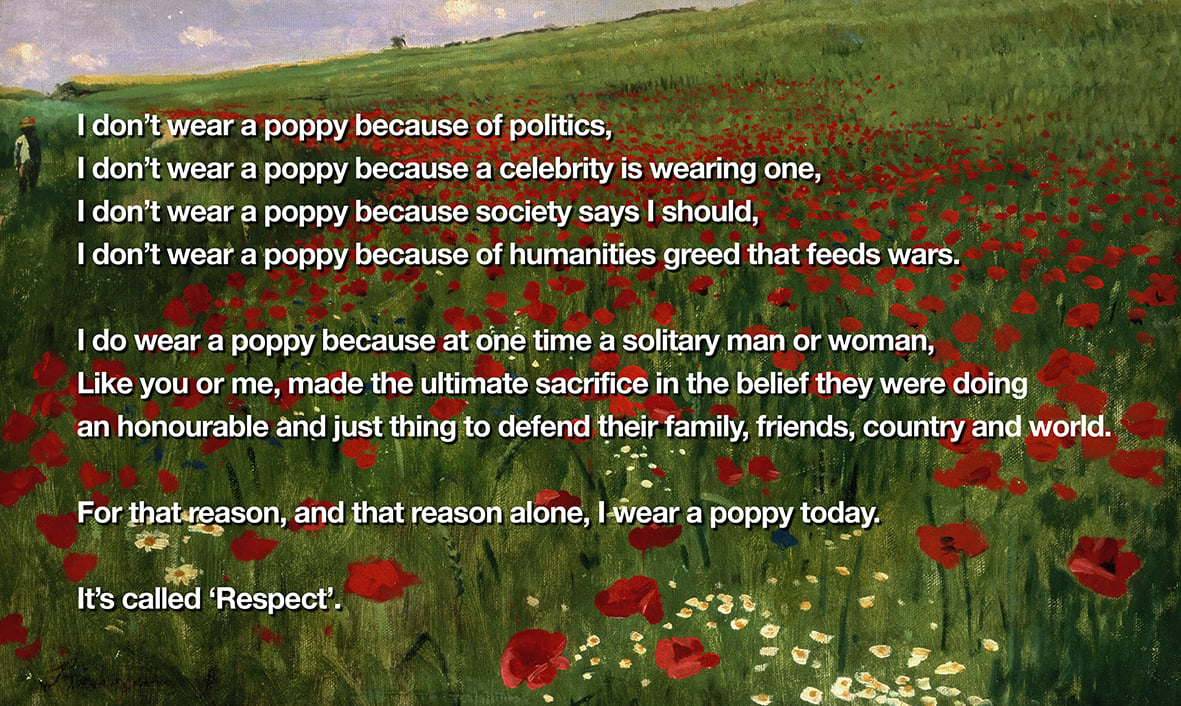 Why I wear a poppy by Alan Firmin. Image: The Poppy Field, 1896 (oil on canvas) by Szinyei Merse, Pal (1845-1920); Hungarian National Gallery, Budapest, Hungary; Hungarian, out of copyright.

This year’s 11th November marks the centenary of Armistice Day, one hundred years since the end of the conflict of the First World War, the ripples of which are still felt today. As part of a worldwide celebration, English and German governments are calling for bells to be rung in bell towers across both the UK and Germany, with a push for other nations to join the celebration. 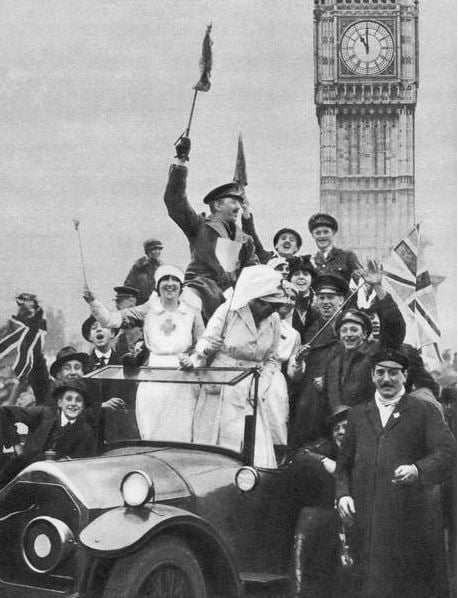 During the war bells were scarcely heard, as the Defence of the Realm Act imposed restrictions for safety’s sake, and as most bell ringers (the majority being men) had left for war. The bells that rang out on the first Armistice Day alerted people nationwide to the establishment of peace, although ironically, these triumphant peals were not skilfully rung given the assortment of volunteers left behind. Charlotte Czyzyk, First World War researcher at the Imperial War Museum, notes the significance of this year’s bells saying, ‘I think that silence throughout the war, then the joyful release with the bells, is very poignant. So it is wonderful that the British and German governments are working together to recreate that.’ It is this poignant meeting of silence with bells, of waiting with release and of mourning with triumph that characterises the celebration of the Armistice.

The Manchester Guardian reported on the original breaking of the silence from London the day after the original peace agreement was announced: ‘Then the church bells that we have never dared to ring but once on any great day of war, burst into a confident ringing. Big Ben over all, letting themselves go, like all London below them.’ The culture secretary, Jeremy Wright, hopes that this year’s bells will ‘replicate the outpouring of relief that took place in 1918’, and that, through them, ‘we will come together to remember all those who lost their lives – regardless of nationality.’ 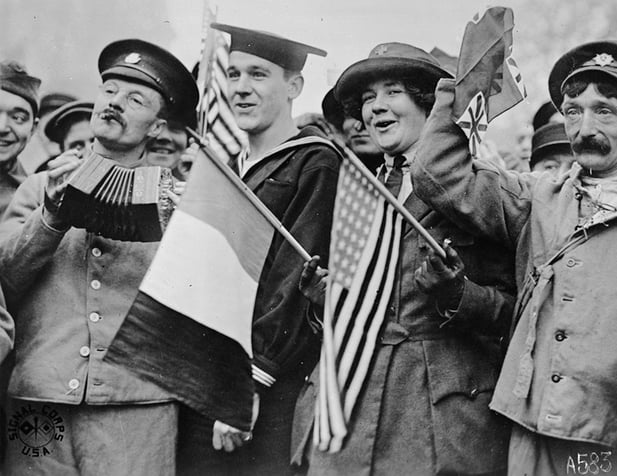 In the spirit of this, I began to browse some of the Bridgeman Images archive’s offerings on the Armistice. 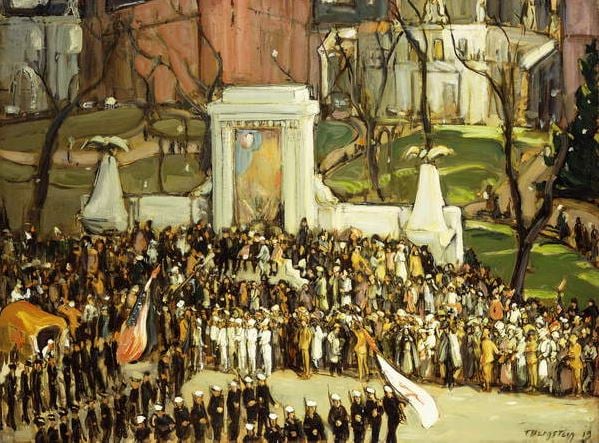 I was first drawn to this painting (above) of Theresa Bernstein’s, an artist little known despite her work’s span across the twentieth century. The piece commemorates the first anniversary of the end of the Great War. It is so vivid one can almost hear the triumphant ringing of the bells.

The cenotaph at Whitehall is emblazoned across the work’s centre; its base swathed with crowds of people. A host of uniformed soldiers parade across the painting’s foreground. The palette is one of warmth: a unity of earthy mustards that verge on gold, and whites and pale greens which bring light to the sobriety of the marchers’ uniforms.

It is the flags of the parade that first struck me most. Floating in an air filled with the sound of bells, they appear to be buoyed up on the triumph of the crowd’s celebration. The national emblems that they bear become secondary as these rich streaks of oils lift the painting, and simultaneously,  the honouring of the Armistice becomes more than the divides between nations. There is a weight to the piece that anchors the light and hopeful greens and golds: a seriousness in the intensity of its colours, the abundance of black figures, and the solemnity of the occasion, which the gravity of the structure of the cenotaph, centre stage, demands. 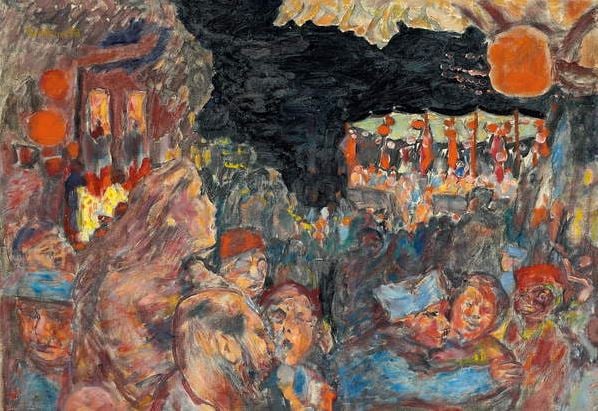 This joy tinged with sorrow, a potent mix of light and dark, is explored too by Pierre Bonard in his Armistice (oil on canvas, 1918), pictured above. Bonard is famed for his relationship with colour, and his tendency to work from memory, capturing the sense of a moment rather than its specifics. The piece is a swirling mass of colours, crowds of figures and expressions of extremes of emotion, whether joy or anguish, melt into an orange sun and a black form of nothingness, or cloud, or mourning perhaps. The painting represents an infinite mix of emotions: a fitting tribute to the heavy emotion of all that the Armistice represents. 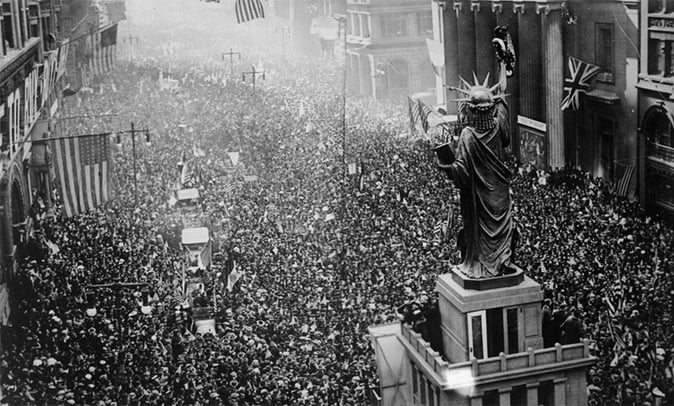 The Armistice was of course also heralded across America as a historic event. The announcing of the armistice on November 11, 1918 was the occasion for a large celebration in Philadelphia, Pennsylvania. Thousands massed on all sides of the replica of the Statue of Liberty on Broad Street, and cheered unceasingly. Across the world, both jubilant celebration and a concern for the huge loss was clear. The same sentiment is relevant to this day. 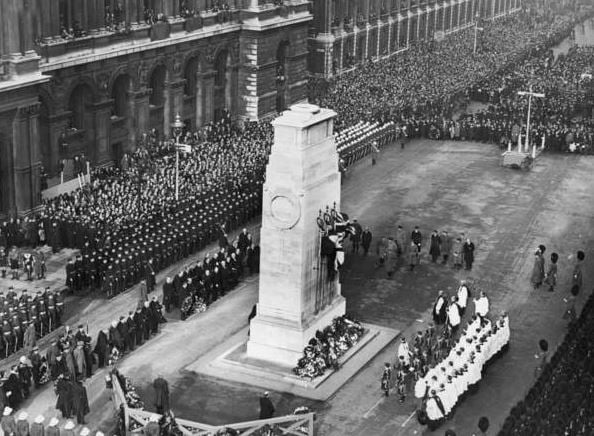 When 2018’s Armistice bells ring out, they will begin with a sombre, half muffled rendition to mimic the marching of soldiers, and then crescendo around 12.30 into full and triumphant ringing. A thread of conflicting emotions, of celebratory mourning, colours such an anniversary as this, as paintings of the time illustrate. It is this that the bells represent, a unity of respect and remembrance for what passed one hundred years ago.

Bridgeman Images Account Manager Beatrice Okoro recalls taking part in the artistic installation ‘Blood Swept Lands and Seas of Red’ that sees the Tower of London’s moat filled with over 800,000 ceramic poppies in her 2014 blog post, ‘A Day to Remember‘.

In the Baileys Women’s Prize for Fiction winning novel How To Be Both, the intertwined stories of...
Read More