The History of Chocolate

With Easter in recent memory and its tradition in many cultures and religions to give and receive chocolate, we have taken a deeper dive to discover and reveal more about the origins, history and traditions of this universally popular food product.

Chocolate’s four thousand year history began in Ancient Mesoamerica, present-day Mexico. It all started with the cacao bean. ‘Cacao’ is the Spanish word for Chcahuatl - which is what Aztecs called the beans chocolate is made from. 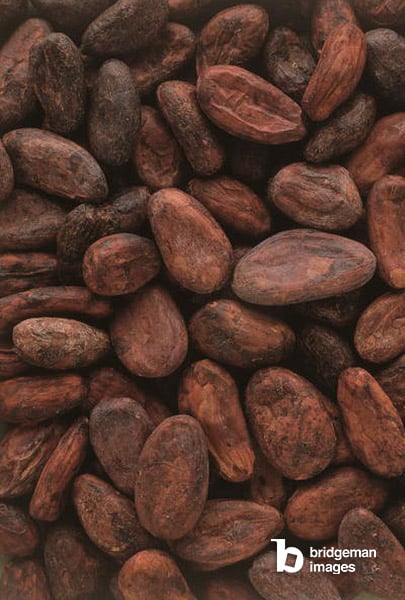 The word chocolate stems from the Classical Nahuatl word chocolatl, of uncertain etymology. Centuries before we tasted a chocolate bar, dating back to 450 BC, chocolate was first used to create fermented beverages. The Mexica believed that cacao seeds were the gift of Quetzalcoatl, the God of wisdom. They held so much value that they were also used as a form of currency in the region.

In this article, we will discover the history of chocolate alongside a selection of unique Bridgeman images… 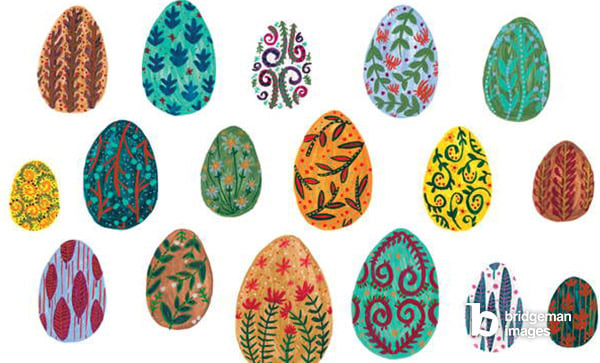 The Desire for Chocolate

The consumption, cultivation and cultural use of cacao were extensive in Mesoamerica where the cacao tree is native. The beans themselves are bitter due to the alkaloids in them, the sweet pulp is believed to have been the first element consumed by humans. 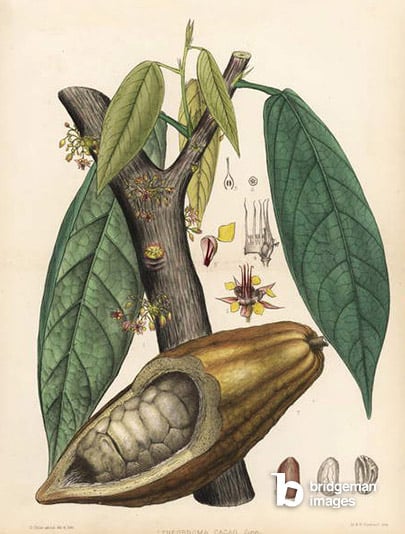 Cacao pods grow in a wide variety of colours from dark pale to crimson, all the way to pale yellow to green. Historical evidence suggests that cacao pods may have been fermented as an alcoholic drink as early as 1400 BC. The chocolate in later years was also served as a bitter liquid, mixed with spices or corn puree. 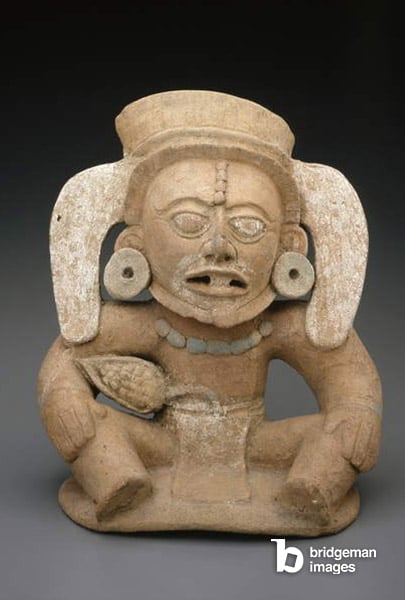 Today in the South of Mexico and the northern triangle of Central America (Guatemala, El Salvador and Honduras) such drinks are known as ‘Chilates’.  Pre-Hispanic vases display depictions of the consumption of the chocolate drink. 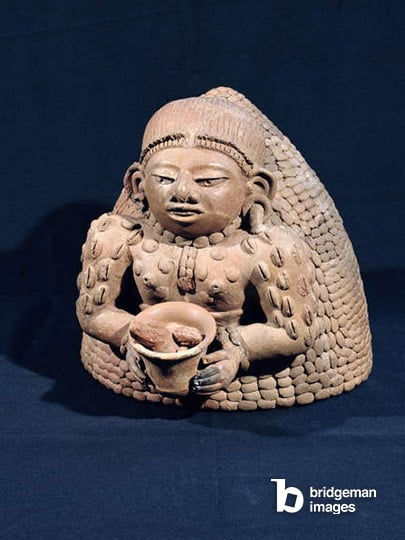 In the sixteenth century, it arrived in Europe, sugar was added to it and it soon became popular throughout society, first among the elite and then among the common people. 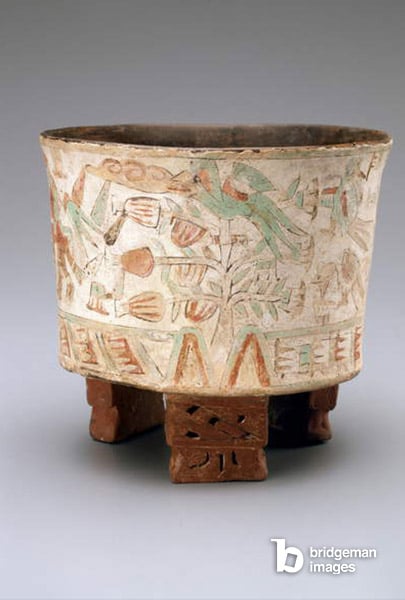 Mayans in Guatemala produced writings about cacao that confirm the identification of the drink with the Gods. The Dresden Codex (a Maya book) specifies that cacao is the food of the rain deity Chaac. 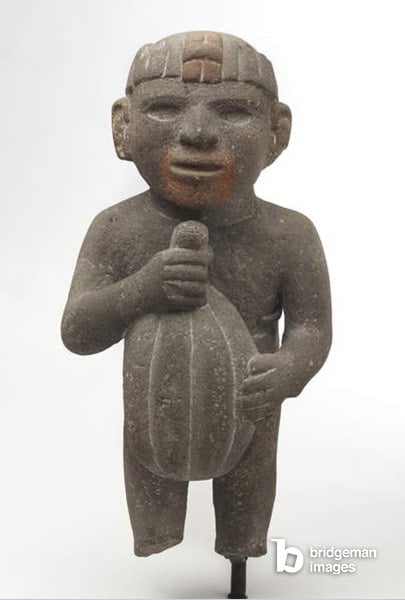 The Madrid codex states that gods shed their blood on the cacao pods as part of its production. Each year, the Mayans would gather and give thanks to the god Ek Chuah who they saw as the Cacao god. There were many uses for Cacao in Maya. It was used in religious offerings, at feasts and festivals, as funerary offerings and in official ceremonies. 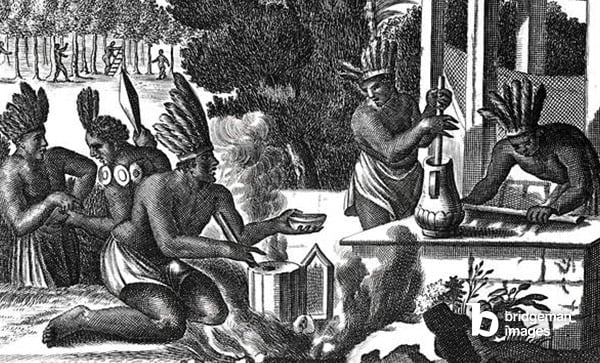 The cacao tree was wholly unknown to the Europeans until the 16th century! Christopher Columbus discovered the cacao bean on his fourth mission to the Americas on August 15, 1502. He instructed his crew to seize a large native canoe that proved to contain cacao beans - excellent for trade. Columbus took cacao beans with him back to Spain but it made no impact until Spanish friars introduced chocolate to the Spanish court.

Legend has it that explorer Hernan Cortes brought chocolate to his homeland - Spain - in 1528. He had first discovered it in the court of Montezuma in 1519. Bernal Diaz who accompanied Cortes in the quest of Mexico, wrote of the encounter which he witnessed: ‘From time to time they served him in cups of pure gold a certain drink from cacao. It was said that it gave one power over women, but this I never saw.’ After the Spanish conquest of the Aztecs, chocolate was imported to Europe.

Honey and sugar was mixed with Spanish chocolate to sweeten the bitter taste. Catholic monks loved chocolate and drank it to aid religious practices.

Today, roughly two-thirds of the world's cocoa is produced in Western Africa, with Ivory Coast being the largest source. Cameroon, Nigeria and Ghana are other West African countries among the top 5 cocoa-producing countries in the world. 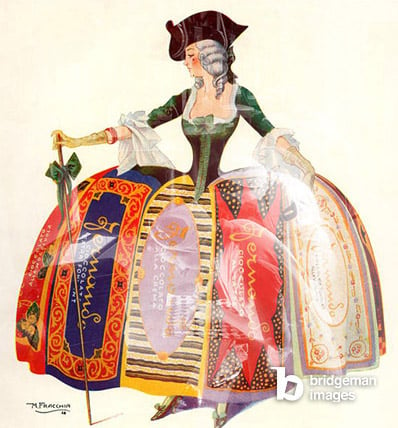 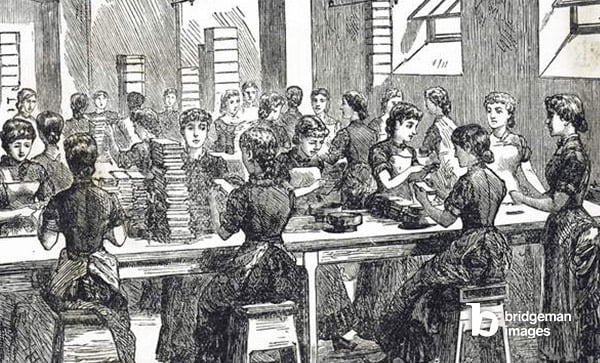 Tim Burton’s film Charlie and the Chocolate Factory is a magnificent example of ‘chocolate’ explored through modern fantasy film! The imaginative chocolatier Willy Wonka invites 4 children to his wonderful chocolate factory, led by the world's most unusual candy!

Discover the image gallery on chocolate

Can not find what you are looking for? Contact us. We are always more than happy to help you with your research, at no obligation or additional cost.

Finally, if you want to register or connect to our site, you will be able to access several additional tools, including being able to download images and videos faster.

Let’s celebrate the ‘beautiful game’ with a chronological countdown of 10 iconic moments in...
Read More

Observed annually each February in the US (and October in the UK), Black History Month remembers...
Read More