The Christmas Truce of 1914

‘Stille Nacht. Heilige Nacht. Alles schläft, einsam wacht’.  Just after dawn on a cold Christmas day in 1914 one of the most extraordinary events of the Great War was to unfold. It began with carol-singing in the trenches and both sides eventually ventured in “no man’s land” to mingle and exchange gifts.

The temporary ceasefire of The Christmas Truce came only five months after the outbreak of the war in Europe and has become an enduring image of the triumph of man’s spirit over adversity.

Coinciding with the centenary commemorations, it is an event that has been brought to life in a British retailer Christmas commercial, racking up more than 12 million YouTube views but also more than 700 complaints. While some think it’s ‘brilliant’ others have derided the ‘cynical’ use of First World War imagery to promote the supermarket’s brand as disrespectful to those who fought in the conflict. 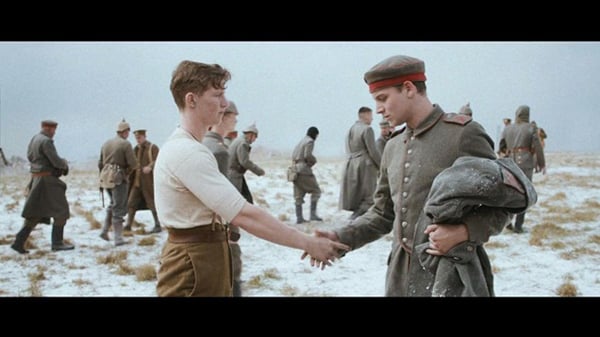 In the advert two young men meet halfway across no man’s land, shake hands and play a game of football. Sainsbury’s say ‘Christmas is for sharing’ and a British soldier gives his German adversary chocolate.  The trenches scenes were reconstructed with the help of a war historian and there is no disputing that the cinematography is breathtaking and the actors look the part.

The reality of the Christmas Truce is a less romantic story

During World War One soldiers from opposing sides laid down their guns and celebrated Christmas together. This fact is not to be questioned as letters home and photographs record this moment of humanity.  The reality of the Christmas Truce, however, is a slightly less romantic story as it was also used as an occasion to bury the dead.

Historians claim the advert confuses understanding of the war

History Extra argue that the advert ‘confuses understanding’ of the First World War as it is a snapshot presented as a panorama. In reality, the truce can be localised to just one or two battalions.

Connelly, a professor of modern British military history, also told the magazine: “What’s interesting is how often the truce is presented as something that the Germans started … but in the advert, it’s the British soldier who first goes out. So it’s a slight variant on the usual perception of the truce.”

“And of course, the advert had to feature the football match! There is no categorical evidence that a match actually took place, although we have plenty of circumstantial evidence. That iconic idea of lots of chaps playing football – a 30 vs 30 – is an idea that has grown in the public imagination.” 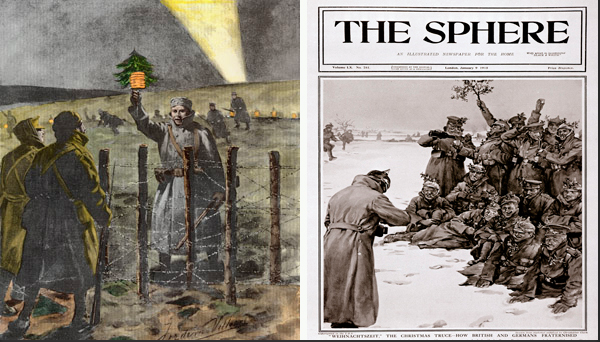 Using the memories of those who died in the Great War to sell groceries can seem inappropriate, as the social media response attests, but it is a successful re-imagining of a poignant historical moment, restoring your faith in humanity at a time of remembrance.  Sainsbury’s have emphasised that all profits from the sale of each tie-in chocolate bar (50p per bar) will be going to the Royal British Legion and they hope to trump the £4.5 million they raised for the charity last year. It could also be argued that film studios represent war just as inaccurately for revenue’s sake.

See more illustration and photography of The Christmas Truce 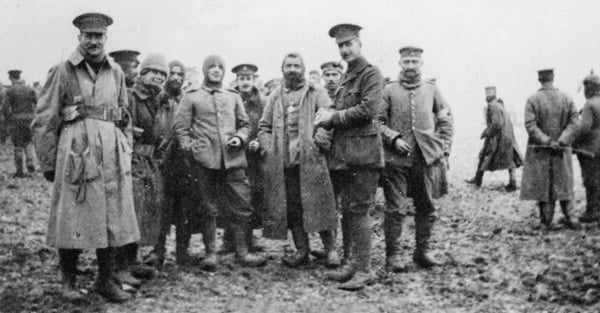 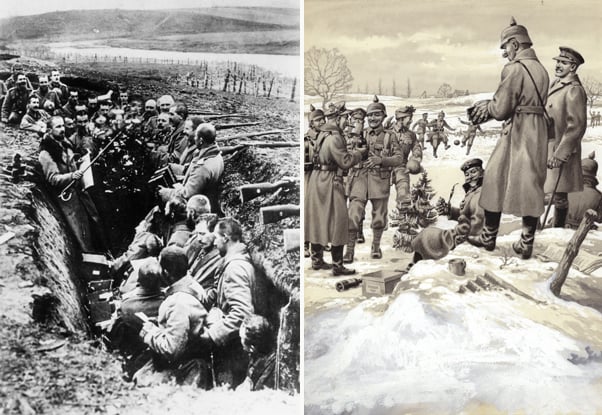 Contact the Bridgeman sales team (uksales@bridgemanimages.com) for more information regarding licensing, reproduction and copyright of images and footage.

On its website, Sainsbury’s say: “While our ad is a fictionalised version of the events that took place, we’ve made every effort to ensure that the details are as authentic as possible. “The ad launched on November 12th and we hope it will help raise further funds for The Royal British Legion.”

Napoleon’s rise to fame as an ambitious military leader has been recorded in these marvellous...
Read More

Napoleon invented new laws under the ‘Napoleonic Code’ which directly affected all of the citizens...
Read More