Lucian Freud’s Work Through the Decades

In anticipation of these big anniversaries, and as the representatives of Lucian Freud’s estate, we would like to share with you a wealth of Lucian Freud related material from the archive, including both stills and footage.

Lucian Freud’s painting career spanned an amazing eighty decades. Below is a selection of works from the Bridgeman Images archives exploring the different phases in the great painter’s work, from the 1930s to the 2000s.

Freud’s earliest work is characterised by a strange, dreamy distortion: a kind of surrealism rendered in rich, earthy tones. He began to explore portraiture from the very beginning of his career, but was far more aligned with the experimental tendencies of his contemporaries at this time than any other. The paintings below were painted in 1939, the year Freud began studying at Cedric Morris’ East Anglian School of Painting and Drawing. 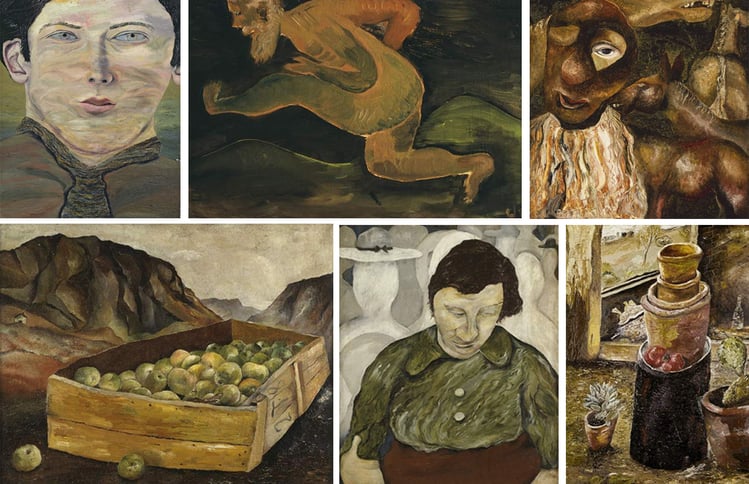 There is an unnerving clarity to the careful flatness of Freud’s works during the 1940s. Subjects’ eyes are painstakingly framed lash by lash, and poses (whether that of man, woman, or squid) are juxtaposed with objects and framed with backdrops, but the viewer is nonetheless blinded to what lies behind these glassy stares. Although striking in their own right, here is a pale, polished, superficiality to these works that is largely absent from the later painterly pieces Freud is famed for. 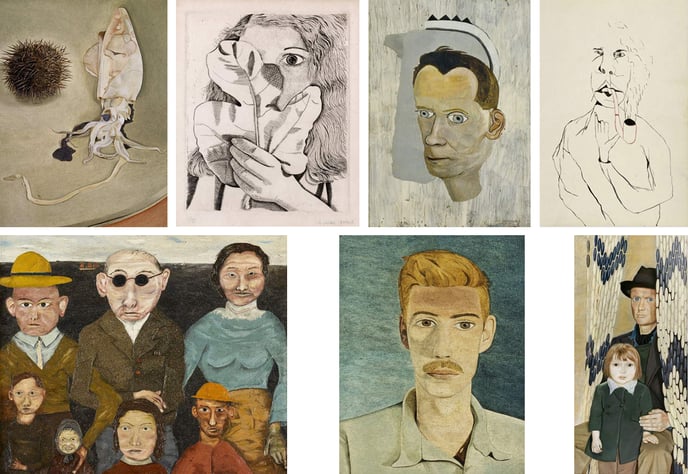 A little structural depth and a little warmth of colour develop in Freud’s works through the fifties. Staring eyes remain, and clean compositions persist. Freud’s figures are delicately veined, their skin mottled and creased with chilling detail. And yet such attention to detail, the every day precisely rendered and yet slightly distorted, is incredibly attractive too. 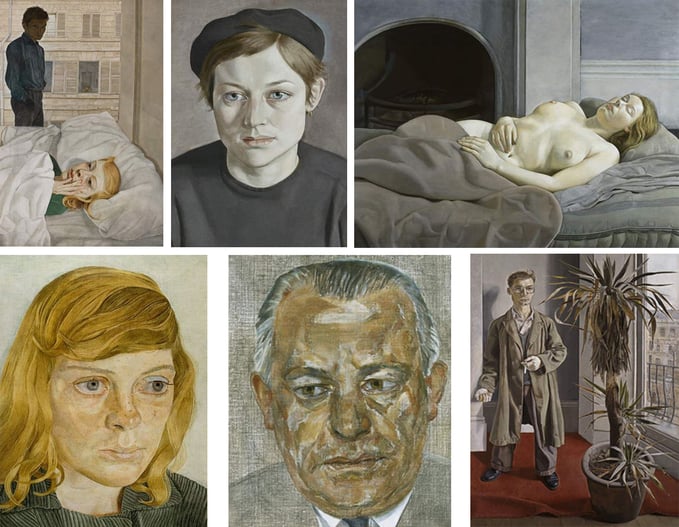 The sixties see Freud’s work become a little more painterly. You can see where his brush has touched the canvas, and a rich spectrum of shades kaleidoscope out from each of his colours. That particular soft splintering of colour is now visible. These works still boast the slightly uncomfortable, strange compositions, but are now fleshed out with layers and layers of colour. 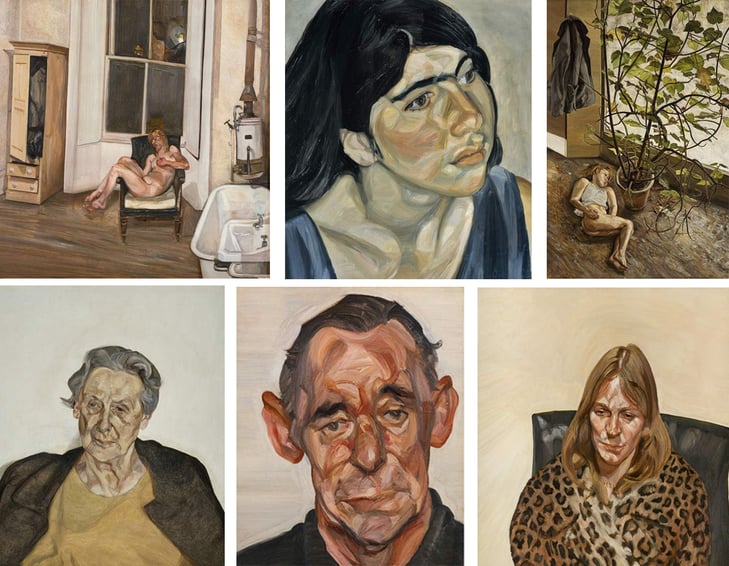 Freud’s portraits flourish into the muscular, sinewy, fleshy bodies for which he has been adored. A multitude of tone and texture are applied to each limb’s contours, until the bodies buzz with life. They are not necessarily joyful celebrations of the living, but rather fearless examinations of the very essence of the body. 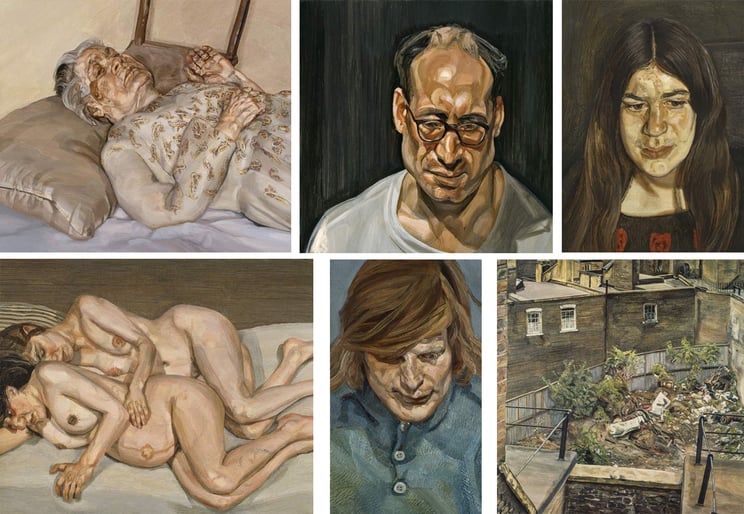 There is a fresh intensity, a distinct character to each of the hard-hitting portraits that characterise this period of Freud’s career. Although each figure is set in a background of Freud’s studio: the same pile of rags, the same worn sofa, the same warm light; each portrait delves so deeply into the physicality of its subject there is no danger of tedious repetition. Instead, there is a sense of a thorough and endlessly fruitful exploration. 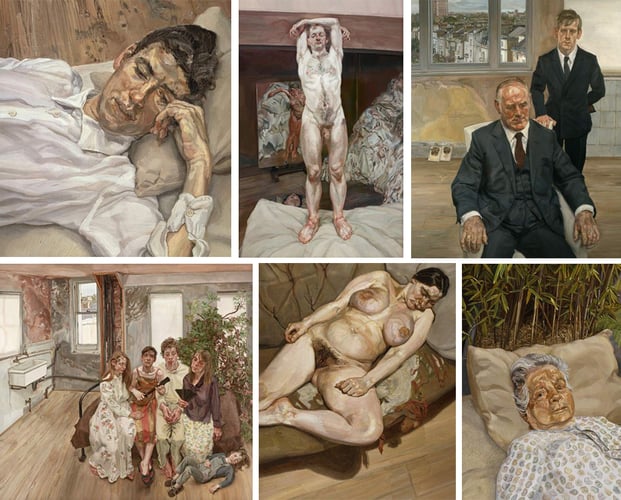 Evening in the Studio, 1993 (oil on canvas), is a mature insight into the workings of Freud and his studio space. It is a unity of paint streaked walls, tightly rendered pattern, flushed and mottled flesh, ramshackle furniture, and that beloved whippet, Eli. One of the figures is Sue Tilley, muse to many of Freud’s great works; Benefits Supervisor Sleeping, 1995, for instance. This depiction of her represents the mastery of Freud’s rendering of flesh. All of these elements meet in the characteristically strangely attractive composition of Freud’s works. It is as if the viewer has just stumbled into the painter’s guarded studio space. Through the lens of Freud’s streaks of colour, the fusion of cocooned reader, naked woman, iron bedstead and snoozing dog appears the perfect exploitative portrait of Freud’s world of the living. 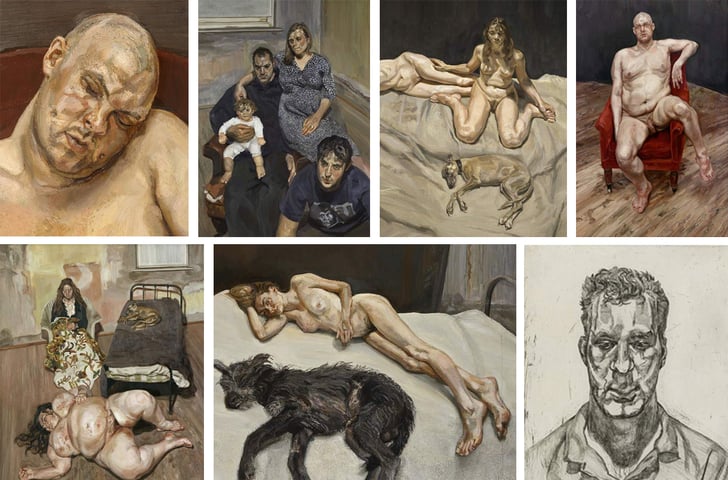 Freud’s paintwork had wholly transformed from his flat early works by the early twenty first century. Skin tones built upon each other in impasto strokes; blending hazily to create the soft yet structured bodies of these pieces. By this point Freud’s assistant of twenty years, David Dawson, had modelled frequently for portraits, often with whippet Eli, as in Eli and David, 2005. Freud’s very last painting, left unfinished, was in this same vein, and it is Dawson who inherited Freud’s estate, and who has collaborated with author Martin Gayford and editor Mark Holborn to curate and produce Lucian Freud. 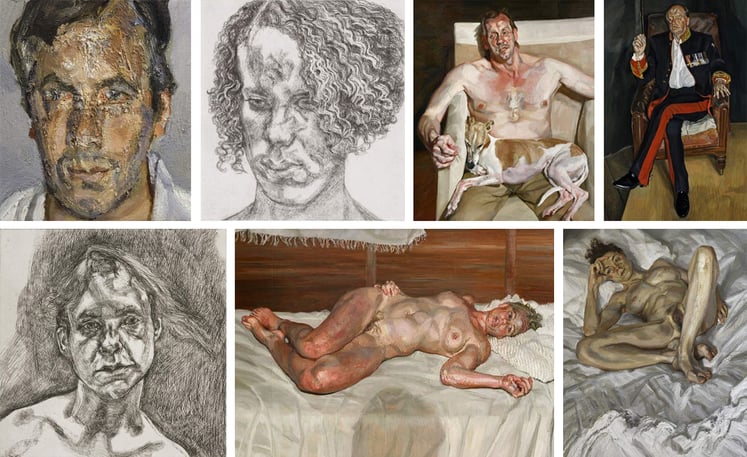 See rare and exclusive footage of Lucian Freud in his studio

See all of Lucian Freud artworks

Find out more about Bridgeman Copyright

The woman behind the muse: Freud’s paintings of Caroline Blackwood – bridgeman blog