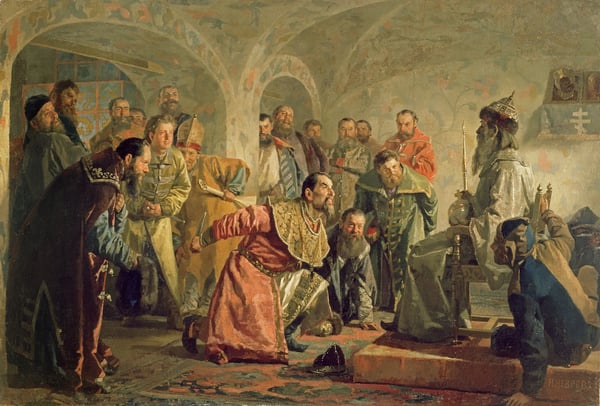 Ivan the Terrible - his life and how he got his name

In the West today, Russia is often, if sometimes unfairly, stereotyped as a shadowy and hostile threat. As recent events have shown, there is no smoke without fire, but it is frequently forgotten that this characterisation first took shape long before Putin, the Cold War, Stalin, the Bolsheviks, and even before Russia’s doomed monarchy. In fact, it stretches back to the very birth of the nation, and is as much a part of its conception as the nature of the man who first ruled it: Ivan Grozny, popularly known as Ivan the Terrible. 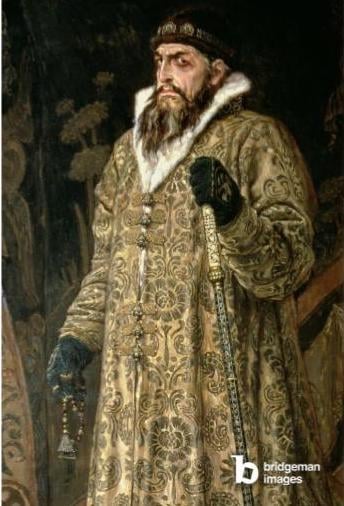 Complicated, ruthless and intelligent, Ivan’s legacy is, like Russia’s, widely misunderstood. His nickname suggests a bloodthirsty and ineffective tyrant, but when ‘The Terrible’ title was first coined, it was intended to suggest an awe-inspiring and fearsome power. Accomplishing more than previous leaders, he aggressively expanded Russian territory, centralising a system of governance under his control. Of course, none of that would have been possible without possible without use of the sword, which Ivan never shrank from, but it is a simplification to remember him purely as a brutal despot. 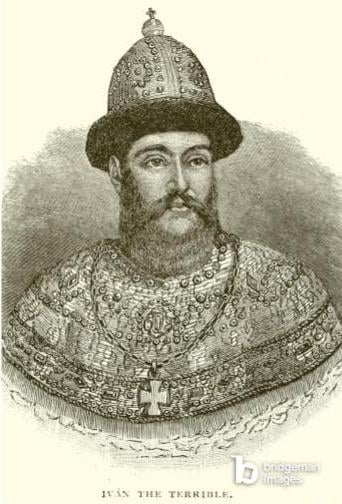 Ultimately, Ivan was a complicated man who suffered considerably in childhood and endured bouts of mental illness throughout his life. His reign transformed Russia from a feudal state into an empire, but also left her economically weakened for centuries to come. As the country’s first Tsar, Ivan laid the foundation for the nation Russia was to become, both through the nature of his personality and of his politics.

Following the death of his father, Ivan was chosen to become Grand Prince at just three years old. Russia was composed of various aristocratic ruling factions at the time, all vying for power when the infant King was crowned. To keep competitors at bay, Ivan’s mother was to rule until he came of age, but she died in 1538 - allegedly by poison – and the plan unravelled. Orphaned, Ivan became the centre of a reanimated and bloody power struggle. From 1538 onwards, until he could assume control, the cast of noble clans abused, mistreated and took advantage of Ivan. Often hidden for his protection, his childhood was lonely and challenging; it was a suffering the child would never forget.

In 1547, at sixteen, Ivan was crowned Tsar; the first Tsar. The early years of his rule were relatively peaceful as he consolidated his position through administrative and bureaucratic reform. Amongst Ivan the Terrible’s achievements were the introduction of the printing press, the founding of a standing army, and the establishment of the first laws restricting the mobility of peasants – something which would eventually lead to serfdom. Prosperity, however, would not last long.

Once secure at home, Ivan sought to expand his territories; he waged a series of unsuccessful wars against the Duchy of Lithuania and the Kingdoms of Poland and Sweden. These resulted in enormous suffering to his people, and, compounded by the effects of drought and famine at home, his allies abandoned him. His wife was murdered - poisoned like his mother - and his closest adviser defected to the Lithuanians. Personally and professionally betrayed, Ivan descended into paranoia. 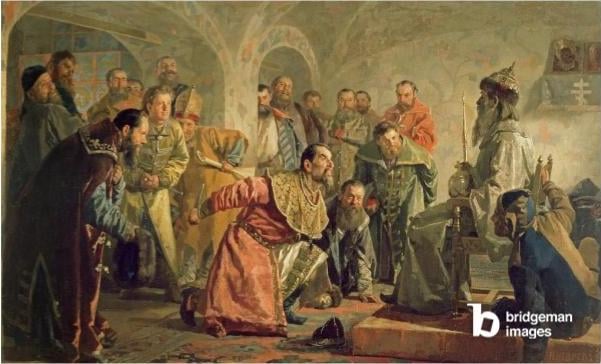 This manifested itself violently through the development of the Oprichnina; a state policy aimed at disenfranchising the aristocracy, involving the systematic execution of nobility, and the mass confiscation of their lands. It served to purge his court of traitors, and to avenge his childhood suffering at their hands. Trusting no-one, wounded and betrayed, Ivan began to live up to his nickname and ruled from then on with an iron fist. 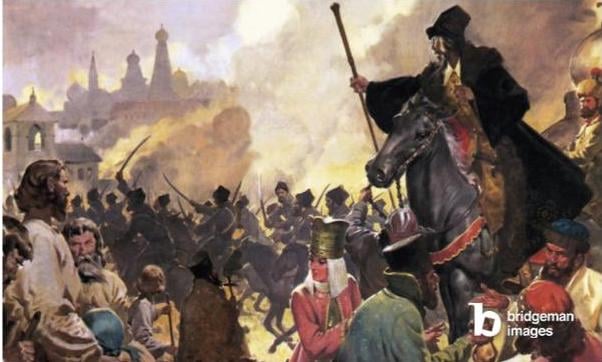 His later years were characterised by this famous brutality. There were more wars with Poland and Sweden and conquests in Kazan, Turkey, Livonia, Crimea and Siberia, all incurring an enormous cost to human life. He became increasingly prone to episodic outbreaks of mental instability, and in one fit of rage, he murdered his oldest son over a domestic dispute. With no prepared heir, Ivan’s youngest son - Fyodor I Ivanovich - assumed his father’s throne, but with little interest or talent for politics, Fyodor’s reign led to a period of intense political crisis known as the Time of Troubles.

So, in death, Ivan leaves a mixed legacy. Although responsible for forming an early-Modern Russia, having transformed it from a feudal state into an empire, he ultimately left it weakened - politically and economically. With no doubt of his influence, both positive and negative, his life has become the stuff of legend, his complicated nature and brutal reign the inspiration for artists and folklorists alike. Countless Ivan the Terrible paintings and Ivan the Terrible films cement him forever, in amongst the figures of Russian iconography. 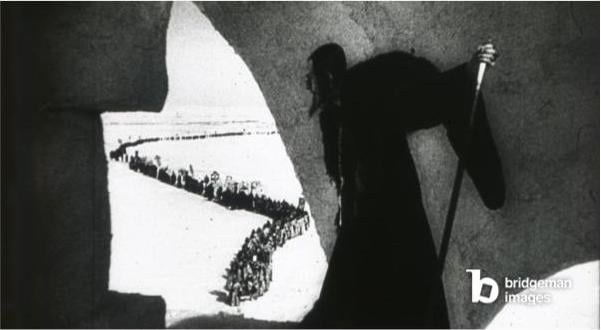 A brief history of Russian leaders and historic events

The Russian state can be traced as far back as the sixteenth century to the rule of Ivan the...
Read More

The history of the Russian monarchy is scattered with names which, nowadays, are widely held in...
Read More