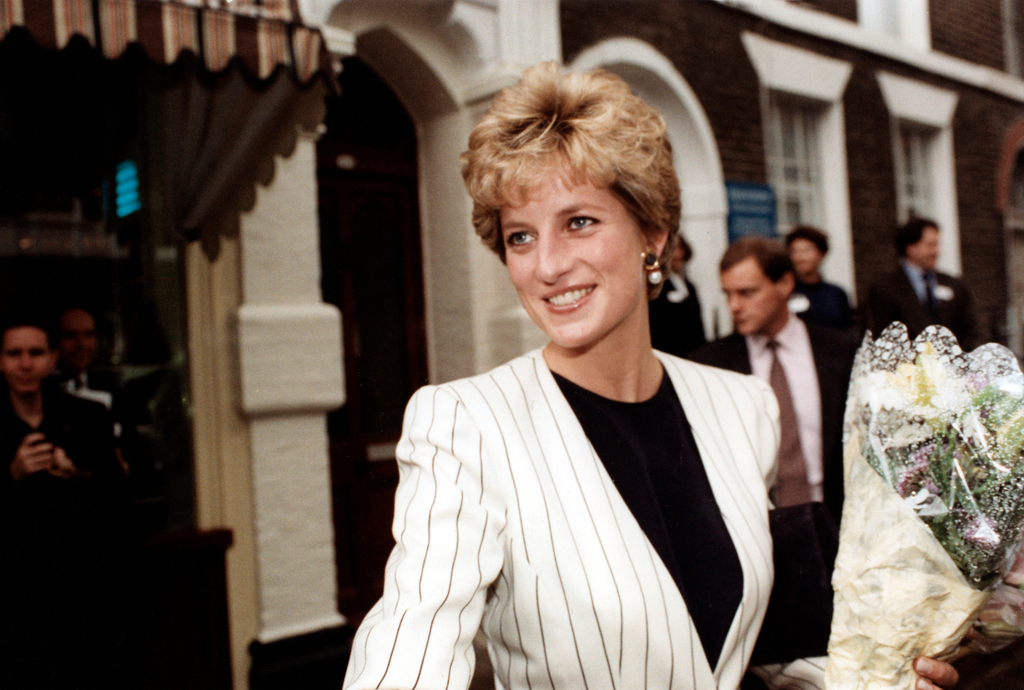 Princess Diana was beautiful and glamorous, an adored international celebrity and member of the Royal Family. Diana was praised for her charity work and unique ability to engage with the ordinary people within society. Charities that she advocated include AIDS awareness and prevention organizations, various cancer trusts, banning the use of landmines and opening up the stigma around mental illness. The world saw her radiating kindness and love. She is remembered as the “People’s Princess” and is still an extremely popular figure in our society today. In this article we will cover an overview of Diana’s life whilst focusing on her role within the royal family, her humanitarian works and looking at the legacy she has left behind. 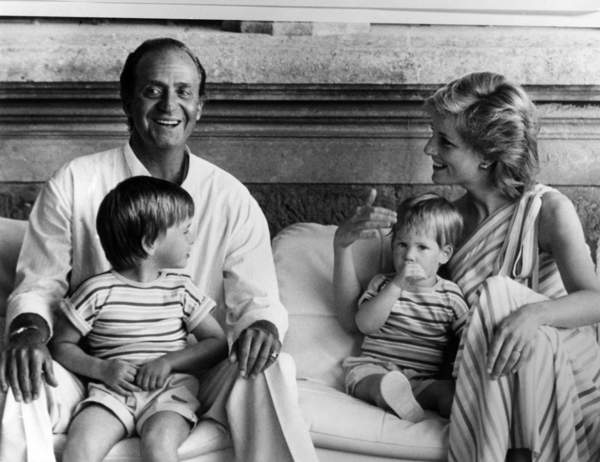 Diana was born in 1961, on July 1, near Sandringham, England. Born into an aristocratic family, her family had been connected to the royals for decades. Queen Elizabeth II was her brother’s godmother and she played with Charles’s brothers as a child.

Diana was given the title of ‘Lady’ in 1975 when her grandfather died and her father became the 8th Earl Spencer. 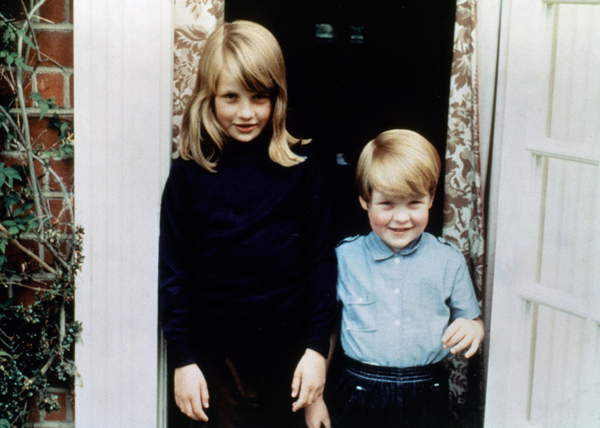 She grew up at Althorp House in Northamptonshire, in the English Midlands. Whilst Diana was still young, her parents divorced, her father won custody over the children. After a period of homeschooling, Diana attended Riddlesworth Hall School and then West Heath School. Diana also went to school in Switzerland and studied at the Institut Alpin Videmanette. 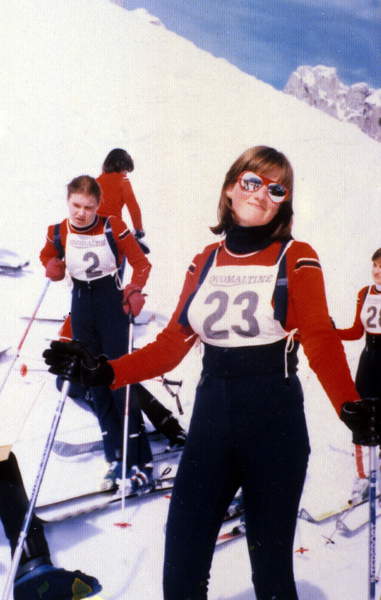 As a young girl Diana was described as quiet and shy, she had an underlying sadness, the cause of which was the separation of her family. However Diana is also said to have had a spark for life and showed a keen interest in dancing, music and sports. 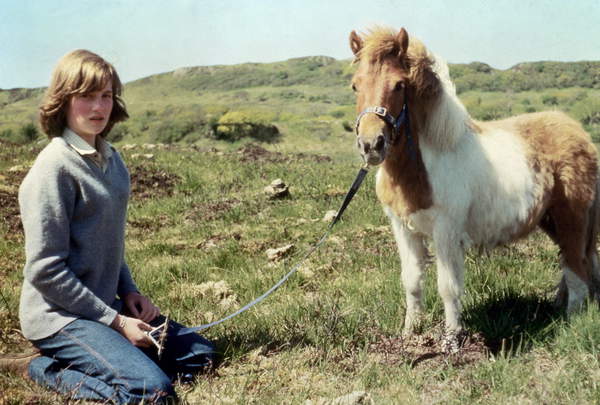 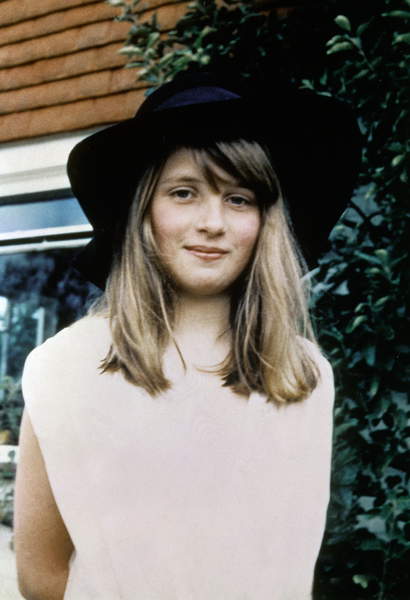 In Diana's early teens she worked as a nanny and a teacher part-time in London's Pimlico area. She was one of the first royal brides to have ever had a paying job before becoming engaged to an heir.

In 1977, Diana aged 16 started dating Prince Charles, heir to the British throne. Charles had met Diana as a young girl when her family rented Park House. Diana was very young, almost a child when the relationship began with Charles. Charles was in his late twenties and was at a time in his life where he felt it was his duty to marry. Diana was a perfect match, a young attractive future princess capable of fulfilling royal responsibilities.

Prior to Diana and Charles’ engagement, Charles was dating Diana's older sister Lady Sarah. Charles invited Diana and her family as guests to watch him play polo during the summer of 1980. This was the beginning of Charles’ serious interest in Diana as a potential bride. Diana was also invited on a sailing weekend to the English seaport town Cowes on the Isle of Wight, aboard the royal yacht Britannia.

Diana was received well by the Queen mother upon a visit to Charles Scottish residence, Balmoral. Charles and Diana had met only a dozen times before they were engaged in 1981. 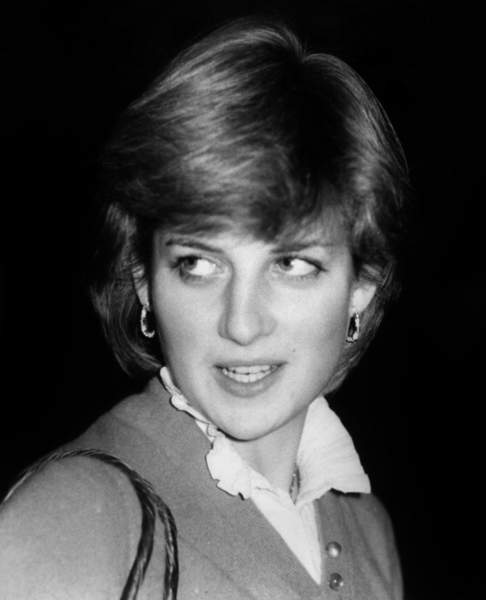 Prince Charles proposed to Diana on February 6, 1981 at Windsor Castle. Their engagement was kept a secret for two and a half weeks. Diana chose out her own engagement ring from crown jeweler Garrard's catalogue. She chose the design of an 18-karat white gold ring topped with a 12-carat oval Ceylon sapphire surrounded by 14 solitaire diamonds.

The couple married on 29 July 1981 at St Paul's Cathedral. The wedding was watched by 750 million people all over the world. In this image below, Princess Diana stares up at the camera’s with a smile, clutching a bouquet of flowers in her white extravagant wedding dress. 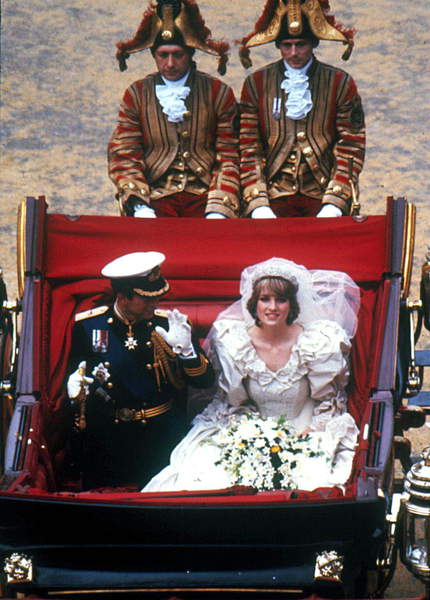 The couple had residences at Highgrove House and Kensington Palace.

In 1995, Princess Diana spoke of her unhappy marriage in a televised panorama interview with Martin Bashir. Diana later divorced Charles and lived her life as an independent woman. Diana had found a new profound freedom in the world.

In 1995, a book titled 'Diana: Her True Story - In Her Own Words' was published by Andrew Morton. Morton had said that 'The Princess was talking about her unhappiness, her sense of betrayal, her suicide attempts - and two things I'd never previously heard of: an eating disorder called bulimia nervosa and a woman called Camilla'. Morton had recorded tapes from Diana and used these as the basis for his narrative.

'I don't go by the rule book … I lead from the heart, not the head' Princess Diana 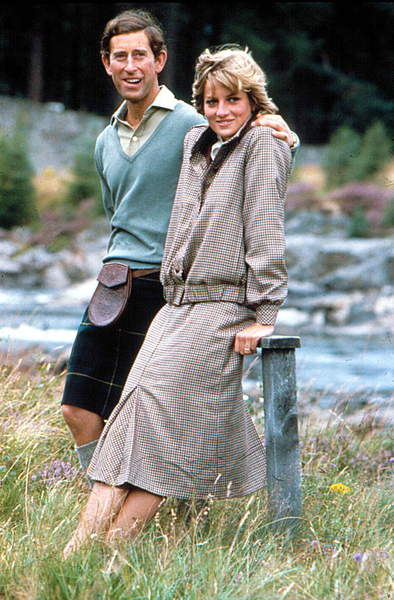 Diana’s first pregnancy was announced in January 1882. The couple's first son, Prince William was born on the 21st June 1982. Diana is pictured below in an elegant pink loose dress with matching heels. William sits contently on his swing with Charles standing behind him, smiling at Diana. 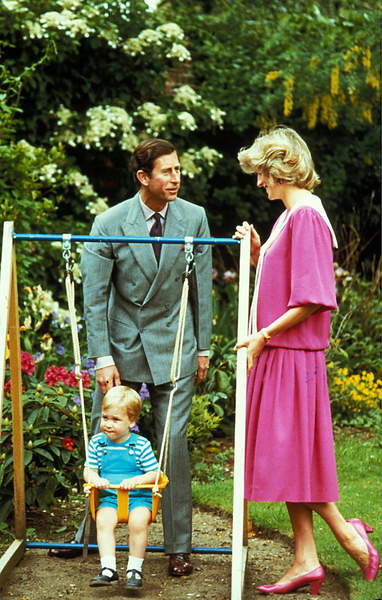 Prince Harry was born two years later in 1984. Princess Diana knew her second child was to be a boy but kept this knowledge to herself, not even telling Charles. Sources say that Diana and Charles were closest during her pregnancy with Harry. 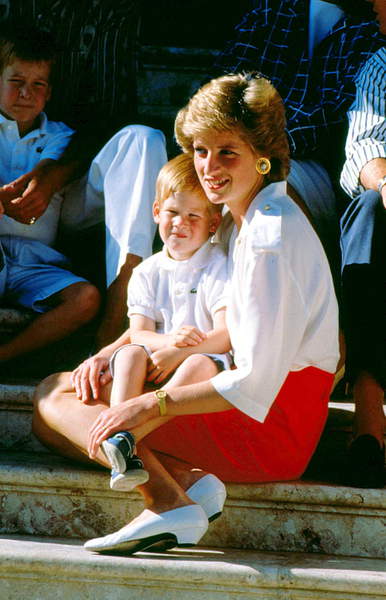 Dismissing royal protocol, Diana chose her children’s first names. Diana ensured that her sons had wider experiences than previous other royal children. She dismissed a royal nanny and chose another. Diana took William, still a baby at the time, on her first major royal tours of Australia and New Zealand.

As often as Diana’s schedule would permit, she made sure to take the boys to school. They attended the Wetherby Preparatory School in Notting Hill, London. The two boys are pictured here smiling for the camera in their smart school uniforms! Princess Diana wears a long red dress with white embroidery. 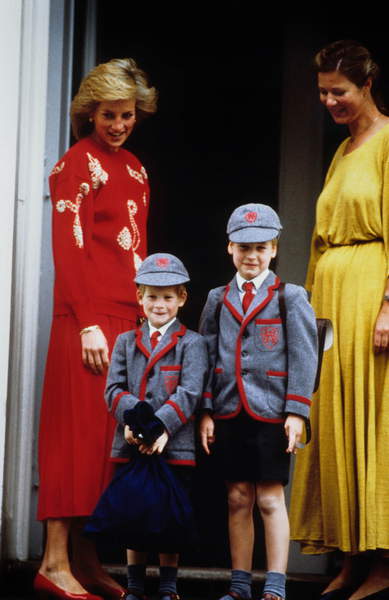 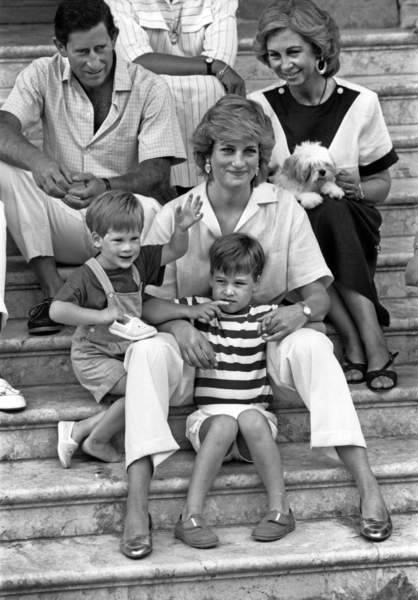 Her first public charity event was held at Goldsmiths Hall in March, 1981. Later in the year, in October, Charles & Diana also made a royal visit to Wales.

Diana was created a Grand Cross of the Order of the Crown by Queen Beatrix upon a visit to the Netherlands with Charles in 1982. Throughout these visits, the press were focused more on Diana rather than Charles, the people’s obsession with her led to the media's term ‘Dianamania’. The couple also opened the Summer Universiade on a trip to Edmonton, Canada in June and July 1983.

Diana travelled the world on Royal engagements, images of her spread across the world, marking her as an international superstar. In the hundreds of images taken of her, Diana wore jewels from across the world including the Queen’s jewels and gifts from leaders in the Middle East. She managed to make this incredibly rich jewelry, young and modern. The world’s focus during the twentieth century was solely on Diana. 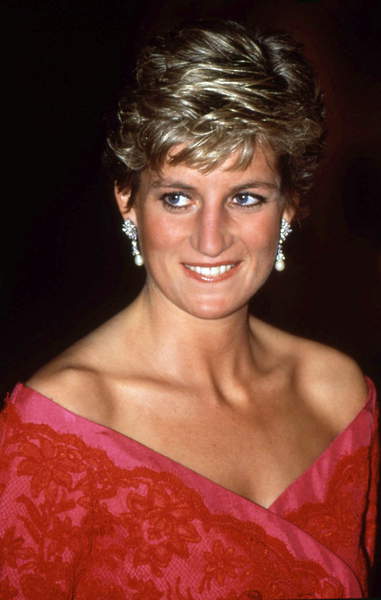 Prince Charles and Diana embarked on a royal tour of India in 1992. Diana took a solo trip during the tour to the Taj Mahal whilst Charles attended to a business trip in Bangalore. This iconic photograph captures Diana sitting in front of the Taj Mahal, the building of love echoes Diana’s feelings of independence. There is also a sense that this picture portrayed her husband in a negative light as she appears lonely. The picture however is a powerful portrayal of Diana. The Diana hairstyle became extremely popular throughout Britain. Diana had the ability to make people aspire to be her. 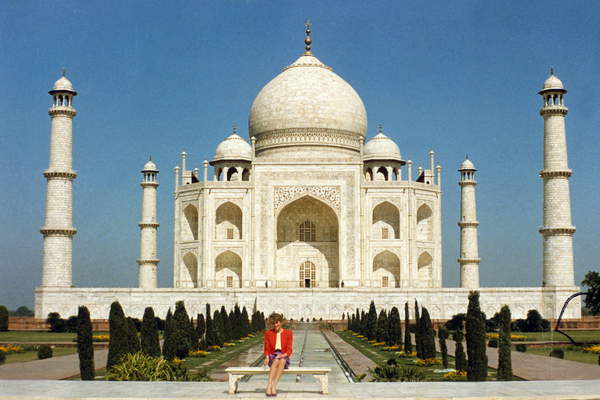 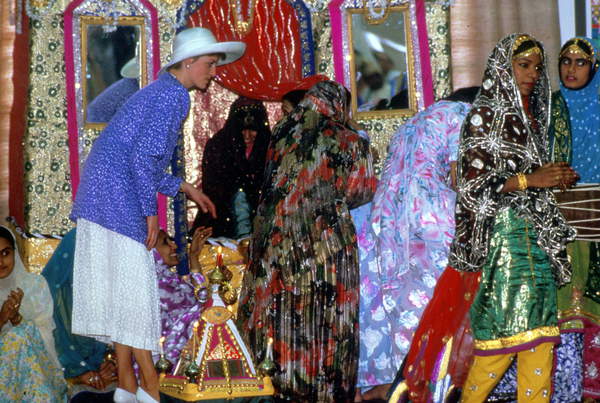 'I knew what my job was; it was to go out and meet the people and love them' Princess Diana

Diana took an active part in charity and activist work which included campaigns for fighting the use of landmines and animal protection. Fulfilling the 20th century patronage, there was an expectation for Diana to make regular visits to schools, hospitals and numerous other facilities.

Aids and Leprosy were two serious illnesses that the Princess developed an intense interest in advocating for. Diana made history when she was photographed shaking an HIV patient's hand without wearing gloves, this helped spread the message of HIV awareness and to educate many people's perceptions of the virus. Diana had also held a Christies auction whereby she sold 79 of her most iconic dresses. This pink dress below is an example of Diana's fashionable evening dresses. 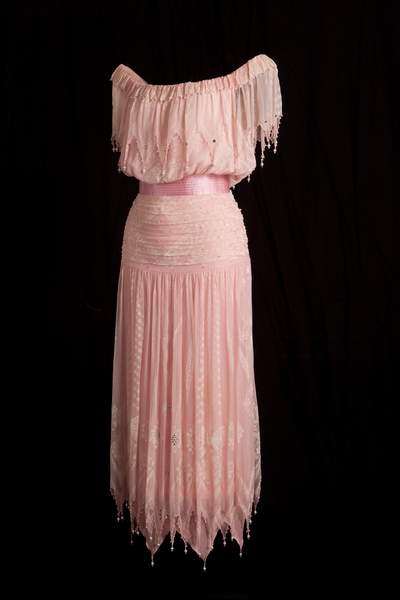 “Her overall effect on charity is probably more significant than any other person’s in the 20th century”, Stephen Lee, director of the UK Institute of Charity Fundraising Managers.

Diana was also a patron for the charity, Centrepoint which provides housing and support for young people across the UK. Diana felt strongly that all young people should have a future, she aimed to end youth poverty, homelessness and break down the stigma associated with mental health.

In this video clip below, Princess Diana alongside Barbara Bush, visited a hospital in London during a state visit in England July 17, 1991. 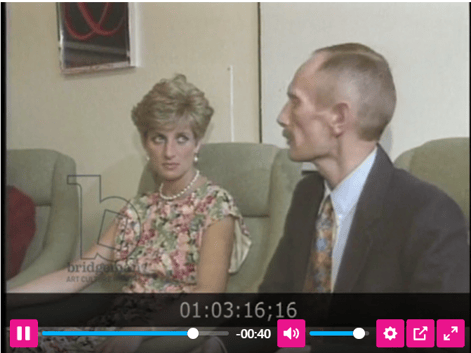 The Legacy of Diana, Princess of Wales

Diana’s son, Prince William, the Duke of Cambridge continued Diana’s legacy by taking on a patronage with Centrepoint in 2005.

Prince Harry has also become a patron for HALO in 2013, an organization that is committed to removing landmines out of the ground for good. 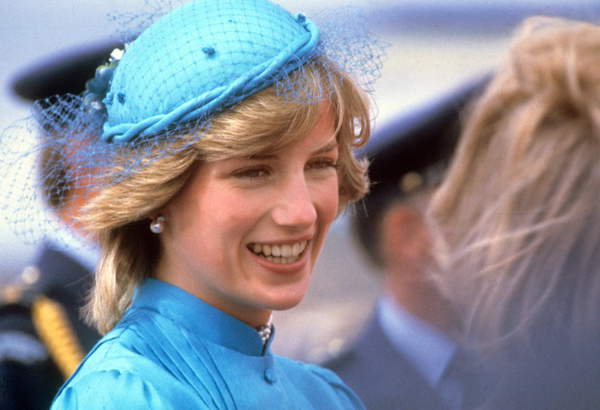 The Woman's Weekly magazine is a British woman's magazine published by Future plc. It is edited by Diane Kenwood and was founded in 1911. Diana is pictured here as an icon. The title 'Exclusive, The Princess of Wales', enforces the publics intrigue with Diana. The magazine's front page is bold with a blue background contrasting against Diana's red dress. 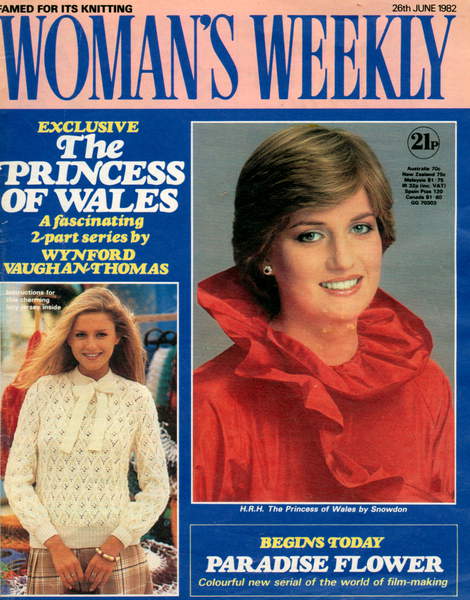 Diana is pictured here on the front cover of Woman's Own magazine, another British lifestyle magazine aimed at women. Diana is pictured as a royal celebrity, dressed in a luxurious blue coat and hat. The caption of the front page reads 'Diana, Liz, Mick, Twigs', Diana is associated with the worlds biggest celebrities in 1985. 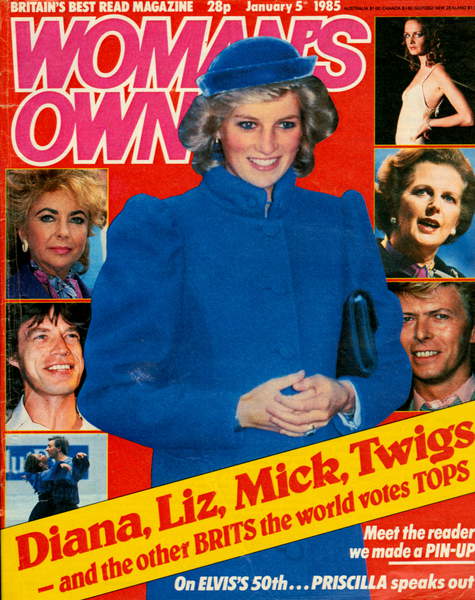 Princess Diana died in a tragic car accident in Paris, in the Pont de l'Alma tunnel. She was travelling with Dodi Al Fayed, a successful Egyptian film producer and the son of billionaire Mohamed Al Fayed. Princess Diana was mourned across the world. In England thousands paid tribute to the princess by laying flowers outside Buckingham Palace and Kensington Gardens. 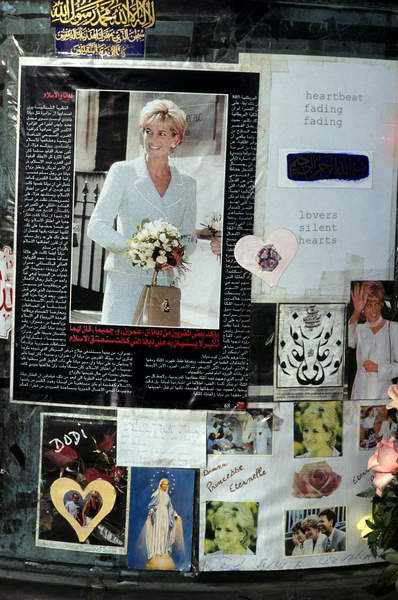 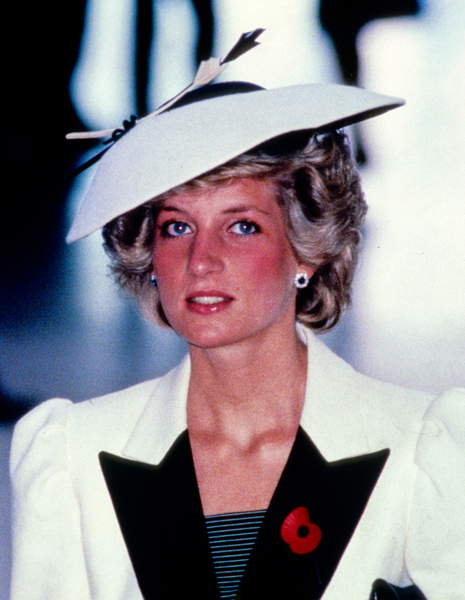 Netflix produced the drama series ‘The Crown’, premiering in 2016. The series was created and principally written by Peter Morgan. ‘This lavish Netflix-original drama chronicles the life of Queen Elizabeth II from the 1940s to modern times’. The programme is highly controversial as the narrative attempts to replicate royal romances, political rivalries and personal intrigues. Real Events in royal history inform the stories played out by actors/actresses.

These images below show Diana played by actress Emma Corrin. 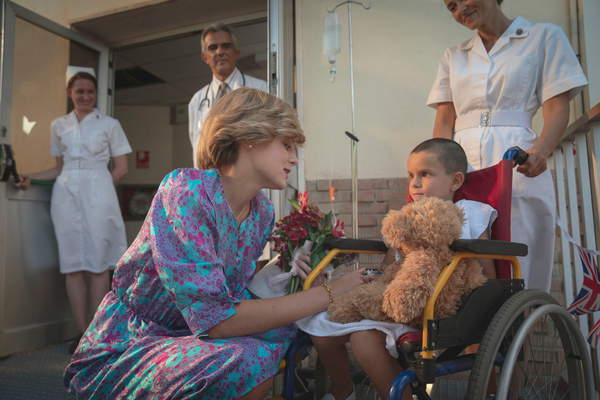 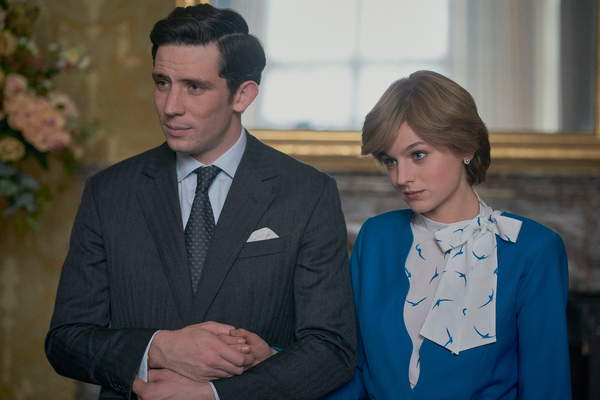 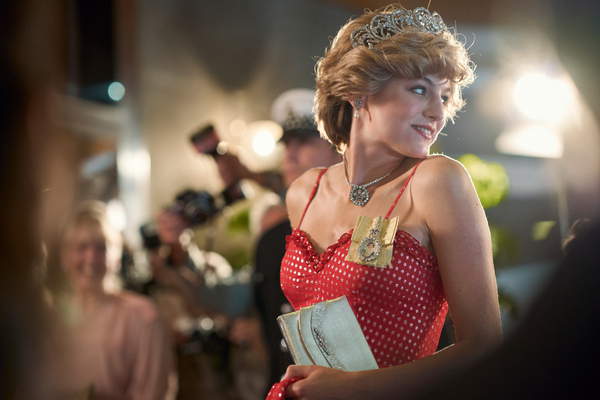 Would you like to discover more images of Princess Diana in the Bridgeman Collection? Please Click here.

Tags: Princess Diana, Royal Family, The Crown
Back to Blog

Folk Art covers a range of visual arts and is produced in the context of folk culture. Folk culture...
Read More