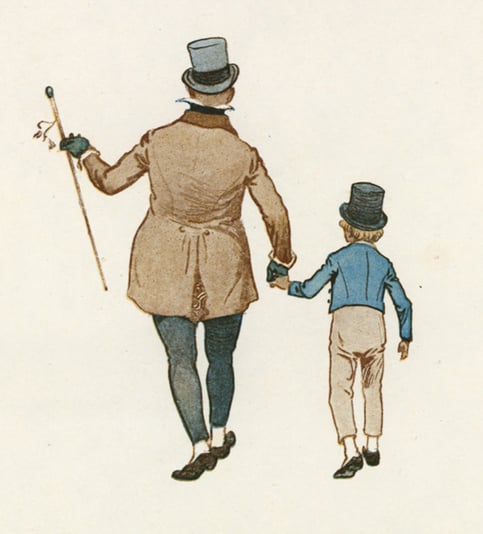 Charles Dickens, author and social critic, is one of the most well loved authors in the world and the greatest novelist of the Victorian era. He has created some of the most iconic literary characters of all time, and enjoyed unprecedented success during his own lifetime. His own rags to riches story inspired a lot of his work, and contributed to the strong themes of social reform and philanthropy that run through his novels.

With a big Charles Dickens anniversary coming up in 2020 – it will be 150 years since his death in June 2020 –  we are sharing with you some lightboxes below with content from collections we represent that are rich with Dickens material  – including the Charles Dickens Museum. Also illustrations from many of Charles Dickens beautiful novels.

Charles Dickens and his family lived at 48 Doughty Street between April 1837 and December 1839. It was opened to the public in 1925, having been saved from demolition by the Dickens Fellowship once the mortgage had been raised and the freehold bought. The house is now the world’s foremost repository of Dickens related material and remains the worldwide headquarters of the Dickens Fellowship. The Picture Library contains what is probably the world’s most extensive range of images connected with the author, and comprises over 5000 photographs, 2000 magic lantern slides, 1000 35mm slides and a large number of colour transparencies. There are also more than 500 portraits of the author.

The British Library’s collections are unrivalled, comprising of over 18 million items from all continents of the world. Housed within the British Library collections are a number of important editions of Dickens novels, including a 1915 edition of A Christmas Carol  which has monochrome and colour pictures by Arthur Rackham (1867–1939),  the original part publication of Charles Dickens’s third novel Nicholas Nickleby, as well as a collection of 136 letters written by Dickens to his wife Catherine Hogarth which were written through out their marriage.

The Lost portrait of Charles Dickens

This recently discovered portrait of a young Charles Dickens (1812–1870) has not been seen in public since its inaugural presentation at the Royal Academy Summer Exhibition of 1844, the year following the publication of A Christmas Carol. Considered lost, even during the artist Margaret Gillies’ (1803–1887) own lifetime, it is an image heretofore only known to Dickens’ biographers through an engraving published in 1844. Its re-emergence following a house-clearance sale in South Africa adds a significant new likeness to the limited early iconography of the writer 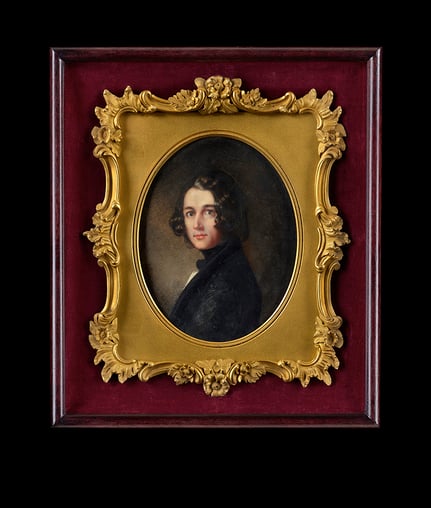 Explore the novels of Charles Dickens:

“The pain of parting is nothing to the joy of meeting again.”
– Charles Dickens, Nicholas Nickleby

Nicholas Nickleby was Charles Dickens third novel, and was originally published in serial form, from 1838-1839. Thought to be the first of Dicken’s “romance” novels, it centers on the life of a young man who must support his mother and sister after his father dies. It was immediately very popular after it was published and established Dickens’s reputation as a great author.

“My heart is set, as firmly as ever heart of man was set on woman. I have no thought, no view, no hope, in life beyond her; and if you oppose me in this great stake, you take my peace and happiness in your hands, and cast them to the wind.”
– Charles Dickens, Oliver Twist

Oliver Twist was Dicken’s second novel, and was also published as a serial. It tracks the life of an orphan boy who goes from the poor house to being recruited as part or a pick pocket gang, run by one of the most iconic of all literary characters – Fagin. It has since been adapted in to a successful musical as well as an award winning film in 1968. 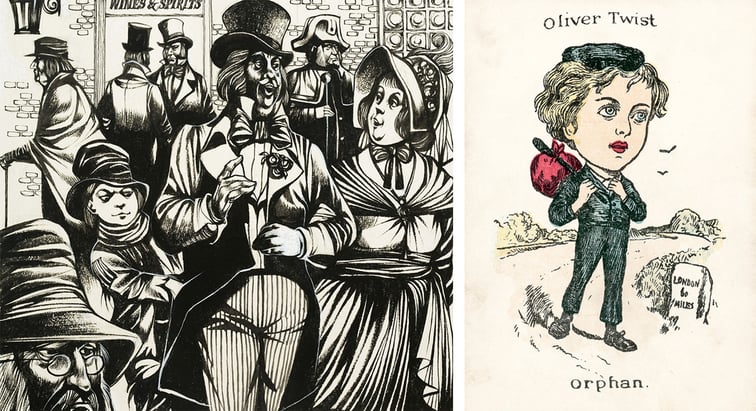 “Men’s courses will foreshadow certain ends, to which, if persevered in, they must lead,” said Scrooge. “But if the courses be departed from, the ends will change.”
― Charles Dickens, A Christmas Carol

A Christmas Carol, a novella by Charles Dickens, was first published in London by Chapman & Hall in 1843 and illustrated by John Leech. A popular book,  the first edition was released for sale on the 12th December and had sold out by Christmas. The novel charts the rise of Christmas as a holiday during the Victorian era, and introduces new Christmas traditions such as the Christmas tree and family gatherings, now taken for granted.

“Suffering has been stronger than all other teaching, and has taught me to understand what your heart used to be. I have been bent and broken, but – I hope – into a better shape.”
– Charles Dickens, Great Expectations

Great Expectations was Dickens’ penultimate novel, and was published in October 1861. Great Expectations is narrated in the first person by the main protagonist, Philip “Pip” Pirrip. Set in Kent, Pip is an orphan who is looked after by his abusive elder sister and her kind-hearted husband. He gets taken on by a wealthy widow as a playmate for her young niece, who Pip ends up falling in love with. The story charts his rags to riches story, and we meet some of Dicken most iconic characters on the way, including the sinister widow Miss Haversham, and the scary convict Abel Magwitch. The novel received almost universal acclaim after it was published. 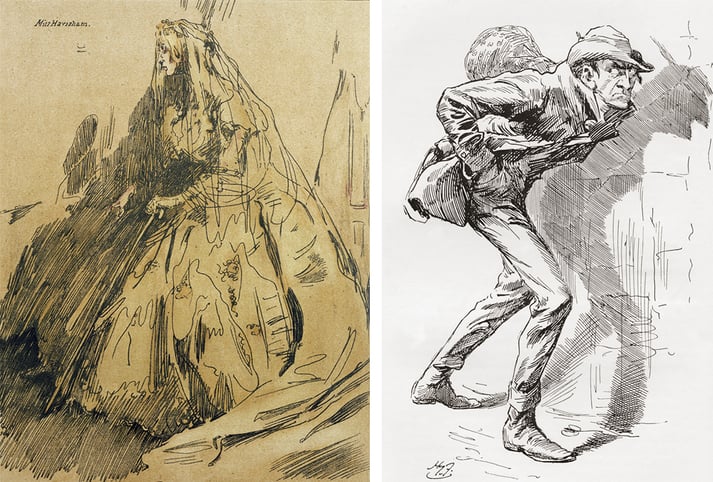 “Poetry makes life what lights and music do the stage.”
– Charles Dickens, The Pickwick Papers

The Posthumous Papers of the Pickwick Club (also known as The Pickwick Papers), was Charles Dickens first novel. Written for publication as a serial, the Pickwick Papers is a sequence of loosely related adventures, centered around Samuel Pickwick, Esquire – a kind and wealthy old gentleman. Charles Dickens was on 24 when he wrote it, and was still writing under his pseudonym of Boz. The serial went on to become a publishing phenomenon. 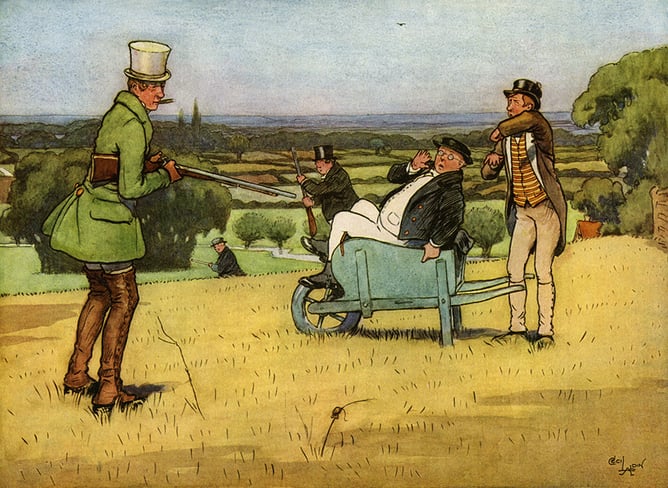 “The changes of a fevered room are slow and fluctuating; but the changes of the fevered world are rapid and irrevocable.” – Charles Dickens, Little Dorrit

Little Dorrit was published in 1855-1857 as a serial (in 1857 as a novel). It is a morality tale which satirises the shortcomings of both government and society, including the institution of debtors’ prisons, where debtors were imprisoned, unable to work, until they repaid their debts (Dickens own father had been sent to a debtors’ prison). The novel also criticizes the British class system, the lack of a social safety net, as well as the lack of workers rights for industrial labourers. 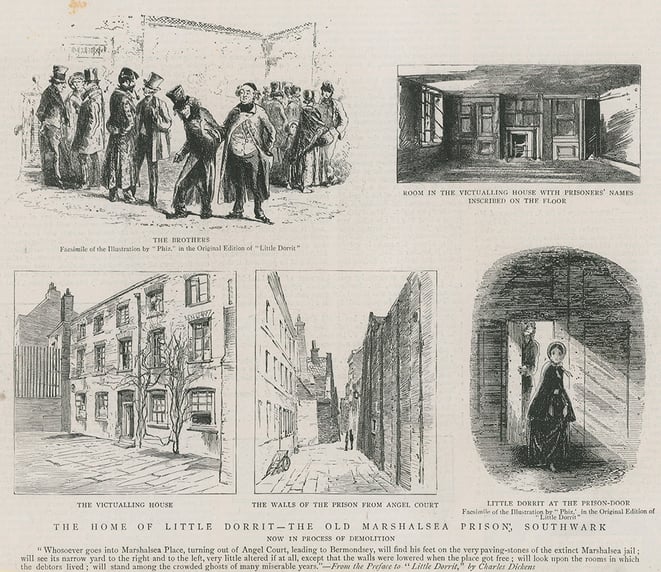 Bleak House is thought by many to be his greatest achievement, and established his reputation as a mature novelist as well as a brilliant comic writer. It is essentially a mystery, telling the story of the icily beautiful Lady Dedlock , who nurses a dark secret in her past, and the merciless lawyer Tulkinghorn , who seeks to uncover it.  All the characters in the novel are caught up in the infamous case of Jarndyce vs Jarndyce.

“I know enough of the world now to have almost lost the capacity of being much surprised by anything”
– Charles Dickens, David Copperfield

David Copperfield was Charles Dickens 5th novel. It is written in the first person, narrated by David Copperfield and charts his journey from impoverished and neglected child to becoming a successful author – leading people to speculate whether this is Dickens’ veiled autobiography.

We also provide free research, so please do take advantage of this service. If you have any questions regarding searches, or licensing images, please do not hesitate to contact us.

Kiss Me, Though I Might Not Be Irish – bridgeman blog

Creating Something from Nothing: Our Favorite Inventors – bridgeman blog

It takes a one-of-a-kind mind to be able to take an idea and make it a reality. Below, we’ve put...
Read More