One of the most enigmatic, yet fascinating artists of the 20th century, Giorgio Morandi developed his highly distinctive style drawing on the influence of 15th century Italian painters, such as Masaccio and Piero della Francesca and of French Modernists, such as Camille Corot and Paul Cezanne.
Morandi is often thought of as a painter of bottles, jars and other domestic objects. A still life with a pitcher, some boxes and a garlic-shaped bottle is what often comes to mind when thinking of the artist. The artist’s paintings are often interpreted as a quiet opposition to the chaotic modern world.

The online exhibition from Hauser & Wirth features a new group of drawings by George Condo which are related to his most recent painting series ‘Distanced Figures.’ Made during the last three weeks, in the artist’s home studio in New York state, these portrait drawings are evocative of the experience of isolation during this unsettling period of social distance. Depicted in crayon, pencil and ink, overlapping figures are layered, combining multiple viewpoints to reflect different emotions occurring simultaneously. Condo describes the figures in this new series of works as ‘distanced from one another or in fact even distanced from themselves.’

Ancient Prairies, an exhibition of new photographs by Chicago-based artist Terry Evans
showing at the Yancey Richardson Gallery in New York, through Sat 20 Feb 2021.
Prairies are her spiritual centre shown through photographic mosaics where she
explores the hidden complexity of the American prairie and its connection between
humans and nature.
Since 1978 in her native Kansas, Evan’s has had a love for the prairie, which include
aerial photographs of its intricate botanical life.  Her past exhibits include solo shows at
the Art Institute of Chicago, the Smithsonian National Museum of Natural History, the
Nelson-Atkins Museum of Art, the Amon Carter Museum, Ft. Worth, the Field Museum,
Chicago, and the Nevada Museum of Art. Several books have been published on her
work and in many major museum collections.

British artist Patrick Hughes is renowned for his three-dimensional reverse perspective works that create a disorientating, ‘moving’ experience. In this viewing room we explore a selection of 'reverspective' multiples that showcase the recurring themes and signature rectilinear forms used to heighten the illusory impact of his works.

Hughes lives and works in London. His works are in collections including The British Library, the Tate Gallery and the British Academy in London; the Gallery of Modern Art, Glasgow; The Würth Museum, Künzelsau and the Baker Museum, Florida.

Signing a digital guestbook is required to be permitted entry to this exhibition.

The Portland Gallery are delighted to be holding a major exhibition of work by Simon Palmer in conjunction with JHW Fine Art, to be held in February 2021. Palmer was born in Yorkshire in 1956, and graduated from art school in 1977. He has exhibited extensively since 1980, and held ten one-man exhibitions in London with JHW Fine Art.

Palmer’s work, much of which features lush, green countrysides, thick forests and winding country roads is held in many private collections in Europe, America, Australia and Japan. Salt’s Mill at Saltaire holds a large collection of his work; other collections include the National Trust, the Council for the Protection of Rural England, Mercer Art Gallery and the Penn Club, London.

Although the gallery is currently closed under lockdown restrictions, the gallery are offering virtual tours to those who request their arrangement via email. 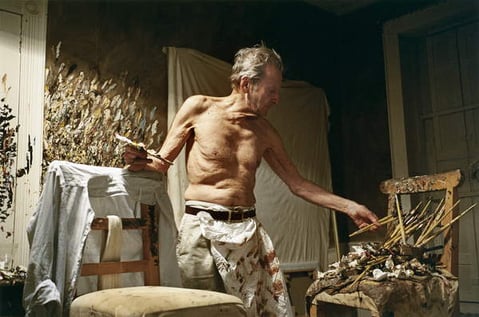 The Artist in his Studio is an oil painting on panel by Rembrandt. Completed around 1628, the painting is now held by the Museum of Fine Arts in Boston, Massachusetts. Featured here, the work reflects on a theme used by many artists, sometimes through self-portraiture, sometimes through portraits of other artists and, sometimes, a coincidental by-product of the artist as creator.

Showcasing a selection of works by Shanti Panchal, David Dawson (whose photographs of close friend Lucian Freud we are proud to represent exclusively), Colin Davidson & Charlie Schaffer the following display presents a dynamic, visual account of the theme as it exists in current practice.

Signing a digital guestbook is required to be permitted entry to this exhibition.

Bridgeman Copyright Artists Jay Batlle and Duncan Hannah are among those featured in this insightful new exhibition organised by Miguel Abreu Gallery in collaboration with Sequence Press. Doomed and Famous: Selections from the Adrian Dannatt Collection accompanies the release of Dannatt’s book of the same title. The show, somewhere between a brocante, an alpine monastery library, and a cabinet de curiosité, gathers highlights from the author’s varied collections, assembled over the years and around the world.

The exhibition ranges from scraps of paper to rare signed publications, minimal sculpture and rococo treasures. Works by such renowned artists as Tina Modotti, Nancy Spero and Picasso alongside paraphernalia, objets trouvés and gifts by some more recherché writers, political activists, artists and friends are included.

Artist Joyce Pensato will be exhibiting her work at New Yorks Petzel Galley (online)
through March 6, 2021. Her paintings are on a large scale on paper in he her usual
palette of black, white and silver inspired by cartoon characters Felix the Cat, Krazy Kat,
and Mickey Mouse to name a few. Much of the exaggeration is on the eyes, which are
usually bulging and showing expressions of pain, sadness or paranoia. Combining
American cartoon culture through her own Abstract Expressionist technique

Pensato (1941–2019) lived and worked in Brooklyn, New York and studied at the New
York Studio School. She received many award and merits for her artistry, her work has
been shown widely through out the world and her work is included in the collections of:
Museum of Contemporary Art, Chicago, IL; Dallas Museum of Art, TX; FRAC des Pays de
la Loire, France; Hammer Museum, Los Angeles, CA; Museum of Modern Art, NY; San
Francisco Museum of Modern Art, CA; and Whitney Museum of American Art, NY. 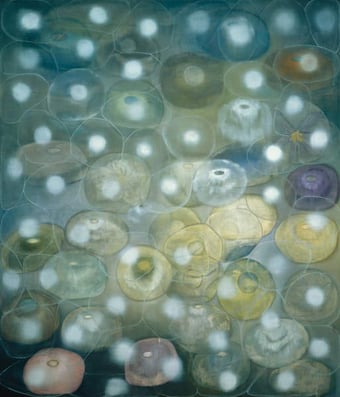 Petzel presents the exhibition PICTURES which expresses the mysteries of light through
a large format camera lens never before seen of artists Ross Bleckner and Philip Smith.
The original PICTURES exhibit started in 1977 organized by art historian Douglas Crimp
in New York City. The online viewing room started in January and will be ongoing.
Ross Bleckner emerged as a prominent artist in the 1980’s during the AIDS crisis. His
paintings suggest meditations on the body, disease and health. He says “The idea that
the body is so perfect, until it’s not perfect. It’s a fragile membrane that separates us
from disaster.” Many of his works are abstract paintings consisting of a kaleidoscope of
dots and stripes emitting a hypnotic effect.
Philip Smith’s works first appeared in one of Douglas Crimp’s PICTURES exhibitions. He
found images in magic books and spy manuals that he photographed on Tri-X black and
white film. He would then use the negatives from his developed film as a source for
material for the paintings. When the negatives become torn, scratched and worn they
become a source for his paintings.

Don't Miss: Lorna Simpson: GIVE ME SOME MOMENTS
Hauser & Wirth (online only)
2 May – ongoing

Hauser & Wirth’s 22nd Street gallery in New York. Presents ‘Give Me Some Moments’
which follows critically acclaimed artist Lorna Simpson 2019 exhibition ‘Darkening’.
The exhibit of female and male protagonists shows her collages of extreme cropping,
splicing and close-ups of the body that represent its association to our culture and the
way we think about ourselves. She uses a technique of cutting and pasting various
image pieces to recreate her masterpieces.
Lorna Simpson is an African-American photographer and multimedia artist and a
Brooklyn born New Yorker who came to prominence in the 1980s and 1990s in the
world of conceptual photography.

Discover a selection of thrilling new exhibitions for the new year – including many online...
Read More

Discover a selection of thrilling new exhibitions for the new year – including many online...
Read More

Tired of all the December festivities already? Why not visit some of the latest art exhibitions?...
Read More